The Summer that Boredom Busted Me - MetroFamily Magazine 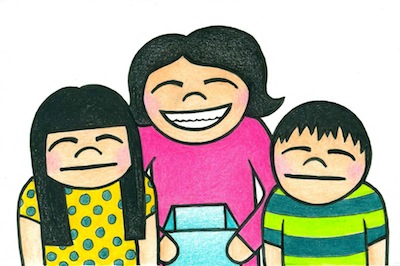 Last summer, I made the Boredom Boxes. You know, like the ones that made their rounds on Pinterest. I repinned them and actually made them. That makes about four pinned ideas that I have actually followed through with. Four, y’all! That’s a personal best for me.

Let me explain the concept for those of you who haven’t been sucked into…um…I mean haven’t had the privilege of repinning them to your “Stuff I hope to do, but probably never will” board. There are five boxes, each labeled with one letter from the word “bored.” Inside each box are dozens of ideas for combating boredom. The B box had ideas for “Being Creative.” The O box had “Outdoor Ideas” for keeping their minds and bodies active. The R box had “Reading Activities” the E box had “Exercise Ideas” and the D box contained dozens of ideas for “Doing Good and Helpful Things.”

I spent hours—HOURS—in the weeks leading up to summer break writing down the ideas and activities that would keep my precious daughters busy, busy, busy and—let’s face it—out of my hair. Momma had her own summer reading list, ya know.

Okay, I probably need to explain that last statement. I love my children. I do. But … by about the second week day of summer vacation, I am exhausted from entertaining and supervising them! (C’mon, don’t leave me hanging, you are too, right???) So that late April night as I was pursuing Pinterest and forsaking my laundry, I just knew that the Boredom Boxes were the ticket to freedom or a stress-free and fun summer, depending on which verbiage you wish to use.

Inside the B box, I put such ideas as painting (outside), writing a story on the driveway with sidewalk chalk, making rice cereal treats in summer shapes and creating new hairstyles (that don’t require scissors, bleach or Kool-Aid).

The R box was also easy—we have dozens and dozens of books in our home. I wrote the titles of several I knew the girls hadn’t read yet and added a couple of teaser activities, such as, “What do you think Margaret’s grandma looks like in Are You There God? It’s Me, Margaret. Draw her or collage her from magazines. Do not, however, use a picture of your momma and say she looks like a grandma. I plan on coloring my hair at the end of summer.”

Exercising, you’d think, would be easy. Just toss in a couple of fitness DVDs and call it good. But, I also included some hiking activities that could be completed in our neighborhood and I mapped a few bike routes for them to follow. My husband suggested that I add some geo-caching activities, which I did, including the caveat that they all had to be completed with Daddy. I don’t have the patience to search for hidden treasure. My pirate name would have been Captain Lazy and Poor.

Finally, in the D box, I listed dozens of chores that they could do for our own family or for our neighbors. That summer, our neighbors thought we had the nicest children.

With my boxes established and aptly decorated (this was a Pinterest idea after all…they had to be decorated), I explained how the boxes worked to my kids. “When you tell me that you are bored, you must draw from one of the boxes. If you think you might be feeling bored, you can draw from one of the boxes. If you just need an idea of what to do, you can draw from the boxes. When you’ve done all the suggestions, do them again. But, under no circumstances, should you ever, ever, never, ever utter the words ‘I’m bored.’ Understand?”

They nodded their little heads and were so excited to reach in and grab an adventure. The first week, it worked beautifully. The girls were taking full advantage of their free days and were enriching their minds, bodies and souls. Better still was the fact that we had made it through the first week of June and they hadn’t uttered  “I’m bored” one time. I patted myself on the back. Well done, Momma. Well done.

Then, I took a nap because those little Boredom Boxes had taken me almost six weeks to make. No wonder my “Stuff I’ll never actually get around to doing” is my most populated board on Pinterest.