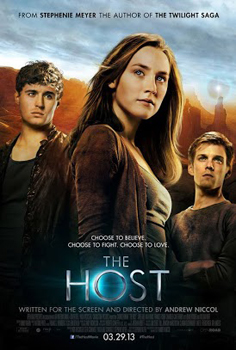 MPAA Rating: PG-13 for some sensuality and violence

Genre: Romance, Sci-Fi, Action, Adventure, Based on a Book

Directed by: Andrew Niccol (based on a book by Stephenie Meyer)

SYNOPSIS: When an alien race threatens humans by taking over their bodies and erasing their memories, Melanie Stryder will risk everything to protect the people she loves.

Sex/Nudity: Lots of passionate kissing/touching between couples who are either teens or in their early 20s. One scene shows a couple in bed, with the guy shirtless.

Violence/Gore: To escape an alien facility, Melanie throws herself through a window and nearly dies, but is implanted with a parasitic alien and lives (the aliens have super-healing methods). A character cuts herself to get a doctor to heal her (as part of a bigger plan). A young boy cuts himself with a sickle. Some blood is shown. A character purposely crashes a car, then nearly dies trying to trek through hot and dusty terrain. Weapons include guns and a sword, used to hold people at bay. Humans are cut at the back of the neck in order to implant alien "Souls" (which look like deep sea anemones). A few chase scenes. Melanie is treated badly (slapped and nearly drowned) by humans who believe she's been taken over by an alien.

Which Kids Will Like It? Kids 13 and older who like Stephenie Meyer books or romantic teen stories involving aliens.

Will Parents Like It? "The Host" is an interesting story with a good message, but it's a little uneven and not quite as compelling as the "Twilight" franchise.

REVIEW: I'm not sure when it happened, but somewhere along the way, all the aliens in movies became vile creatures whose main goal in life is to annihilate the human race and take over Earth. Ok, there was WALL-E, the loveable little waste-collecting robot, and before that, Steven Spielberg's "E.T.," but that was 30 years ago.

Since then, we've had the terrifying creatures in the "Alien" franchise, the scary tripods in "War of the Worlds," and the destructive aliens in "Battleship," "Cowboys and Aliens," "District 9," "Men in Black," and "Super 8." Why do they all want to eradicate us? Can't we all just get along?

The aliens in "The Host" — a.k.a. "Souls" — look like sweet little anemones from the deepest part of the ocean, but once implanted into humans, their goal is to suppress their human hosts and take control of the planet. The parasitic aliens will stop at nothing to kill every last human, because we're all bad, right? No, we're not, but try convincing them. And the confusing thing is that the Souls are supposed to be pacifists [scratching head].

Saoirse Ronan plays Melanie Stryder, a member of the dwindling human resistance, who ends up captured by the aliens and taken to a facility. She then hurls herself out the window and down a couple of stories to escape. After nearly dying, she's implanted with an alien "Soul," whom they call Wanderer.

While most human hosts fade away after being implanted, Melanie doesn't. She continues to thrive insider her body, and persuades Wanderer to evade her evil alien interrogator, The Seeker (Diane Kruger). After staging a car crash, Melanie/Wanderer (we can "hear" Melanie talking to Wanderer, but no one else can), hoof it on foot to the desert hideout where Melanie's human boyfriend, Jared (Max Irons), and little brother, Jamie (Chandler Canterbury) are holed up with other members of the human resistance.

Except … they don't "see" Melanie. They think the only thing left of her is her body, which has been taken over by Wanderer. But slowly, Wanderer—whom Melanie's wise Uncle Jeb (William Hurt) calls Wanda—starts to make herself known. In a weird love quadrangle, Wanderer develops an attraction to Jared's friend Ian (Jake Abel). It's all very multiple-personality.

So the big questions are: Will the humans or aliens triumph over the other? Will Melanie come back? How will the awkward love quadrangle play out? And what will happen to Wanderer if they figure out how to get Melanie back? All questions but the first are answered, and that one leaves it open for a sequel. But since "The Host" came in seventh at the weekend box office, the jury's still out on whether there will be a sequel.

I'd like to see one, because it's an intriguing story with a lot of possibilities. While the pacing is a little uneven and it's kind of a "quiet" alien movie (which you don't see all that often), there's still plenty to like about "The Host." The landscape is beautiful (it was filmed in New Mexico and Louisiana), the love story is sweet, and the music is lovely, including an original soundtrack by Antonio Pinto and the pulsing "Radioactive" by Imagine Dragons played over the end credits.

There's also a really cool underground facility where the human resistance has created an environment capable of growing large fields of wheat. A subterranean Biodome, of sorts.

At this point, I don't know that "The Host" will land quite the rabid fanbase of author Stephenie Meyer's other franchise, "Twilight," but it's still got that whole doomed romance thing going for it, with aliens instead of vampires. And all the guys are really cute, too.