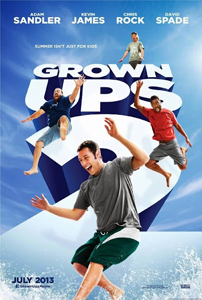 SYNOPSIS: After moving his family back to his hometown to be with his friends and their kids, Lenny (Adam Sandler) finds out that between old bullies, new bullies, schizo bus drivers, drunk cops on skis, and 400 costumed party crashers, sometimes crazy follows you.

Violence/Gore: Bullies, both kids and adults, play heavily into the storyline. A boy is terrorized on a bus, and a drunk bus driver is tied up, tossed, and thrown around for laughs. A teenager has a knife, which he uses to behead a stuffed animal. A scuffle pits college kids against adults.

Drugs/Alcohol: Drinking and drunken behavior throughout the movie. High school kids are mistaken for college students and given beers (which they're not interested in drinking, so they pretend to drink and then act drunk).

Will Parents Like It? "Grown Ups 2" has just about everything going against it, including adults who behave like kids.

REVIEW: Adam Sandler continues to amaze me with his ability to score A-List actors for his movies, which get increasingly dumber with each new movie. All I can gather is that he must pay really well.

"Grown Ups 2" has just about everything going against it — stereotypical characters, kids and adults who behave badly, crude and lewd humor, and a storyline that basically goes nowhere.

Adam Sandler reprises his role from 2010's "Grown Ups," but now Lenny has made a name for himself in Hollywood and decided to move his wife (Salma Hayek) and kids back to his hometown. He's eager to reconnect with his best friends Eric (Kevin James), Kurt (Chris Rock), and Marcus (David Spade) and their families.

However, he can't escape his past. A bully who once terrorized him is still there, and there's a whole new group of frat boys who've taken over the guys' old roost—the swimming hole at the quarry. "Twilight's" Taylor Lautner is the ringleader, and Sandler uses Lautner's gymnastic skills to their fullest effect.

I don't remember the first "Grown Ups" movie being this crude. It's like Sandler tried to pack as many fart, poop and bodily humor jokes as he could into 101 minutes—sometimes all in the same joke. If the jokes even had some originality, that would be something. But they're dated, tired, and unoriginal, as are the stereotypical male/female roles. Salma Hayek needs to do a movie where it's not all about her cleavage, and Sandler needs to do a movie where the women aren't objectified and depicted as one-dimensional nags.

And yet, he still managed to land a great cast, including Maya Rudolph, Maria Bello and Steve Buscemi, in addition to those mentioned above.

There's usually an element of sweetness to Sandler's movies (sometimes deeply buried in the crude humor), but we don't get that until the end of "Grown Ups 2," and it's a very long wait.

The bright spot is seeing Sandler's buddies together (they do have great chemistry, despite everything), and there's an underlying message of friendship, being supportive, and treasuring the gift of lifelong friends.

Also, Georgia Engel shows up as Kevin James' mom, which is kind of neat, even though she's been playing the exact same character since her days as Georgette on "The Mary Tyler Moore Show."

Jane Boursaw is a family entertainment writer specializing in movies and TV. Visit her at http://www.reellifewithjane.com or email jboursaw@charter.net.