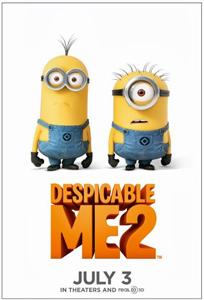 SYNOPSIS: Steve Carell once again voices the super villain Gru, only this time, he's left his action-packed life behind and is now a doting dad to three girls. That is, until he's recruited by the Anti-Villain League to help deal with a powerful new super criminal.

Sex/Nudity: Gru's neighbor keeps trying to set him up with someone. He eventually goes on a date with a woman who dresses provocatively. Gru and Lucy fall in love and kiss. Teenager Margo falls for another teen named Antonio, and the two dance, flirt and hold hands. Eduardo tears his shirt off to reveal a Mexican flag tattooed on his chest.

Violence/Gore: Cartoonish scenes involve Gru and his minions being tasered. The minions are transformed into purple killing machines that can destroy everything around them (but the purple creatures are still cute). Gru and the girls use antidote-filled guns to turn the minions back into harmless yellow creatures. The bad guy threatens Gru with knives. A chicken has a vendetta against Gru and Lucy, and keeps chasing them. Lucy is taken hostage, but never appears to be in serious danger. Scientists experiment on cute bunnies in a laboratory; and the bunnies turn into purple monsters. The minions are indestructible, whether it's getting stuck in a jam vat or pulled behind a car they're chasing.

Drugs/Alcohol: A character notes that something gives them "a bit of a buzz."

Which Kids Will Like It? Kids 6 and older who liked the first "Despicable Me" movie, or colorful animated movies with cute characters.

Will Parents Like It? "Despicable Me 2" is the perfect antidote to all the sad, dramatic and heavy-duty movies out there right now. It's cute and colorful, and features great music and characters, including those adorable minions.

REVIEW: When I heard that people were saying there's "too much Minions" in "Despicable Me 2," I said, what?! There can never be too many minions. It's all about the minions. The rest of the story is cute, too, but directors Pierre Coffin and Chris Renaud wisely put the minions front and center in this sequel to 2010's "Despicable Me," and I love it.

In fact, there's already a 2014 movie in the works called "Minions," where the Minions once again take center stage as Gru is recruited by an organization to stop supervillain Scarlet Overkill and her husband from taking over the world. I'm already super excited about that one.

But back to "Despicable Me 2," which finds retired supervillain Gru (voiced by Steve Carell) living happily with his three girls — Margo (Miranda Cosgrove), Edith (Dana Gaier), and Agnes (Elsie Kate Fisher) — along with their trusty minions, and Dr. Nefario (Russell Brand), who's developing a line of jams and jellies for the family to sell.

One day, a mysterious woman named Lucy (Kristen Wiig) kidnaps Gru and takes him to the underwater headquarters of the Anti-Villain League, where director Silas Ramsbottom (Steve Coogan) explains that a dangerous bioweapon called PX41 can turn living creatures into purple killing machines. The serum has been stolen by a supervillain whom they believe is hiding at the Paradise Mall.

Of course, Gru wants nothing to do with the mall, but the League wants him to work undercover there and figure out which shop owner has plans for world domination. Gru reluctantly agrees to pose as a cupcake baker, with Lucy his partner. The main suspect is the owner of a Mexican restaurant, Eduardo (Benjamin Bratt), but Gru becomes distracted when Margo falls for Eduardo's smooth-talking son, Antonio (Moises Arias).

But much of the movie revolves around Gru's love life. First, his neighbor keeps trying to set him up with someone. He eventually goes on a date, but we learn that Gru has bad memories of being shunned and bullied as a kid, which is why he's hesitant to get close to someone. Then Agnes (who surely gets the "most adorable animated child" award) keeps trying to get Gru to fall in love with Lucy, so she and her sisters will have a mother.

It's difficult to create animated characters that have actual chemistry, but Gru and Lucy have it. And I love that it's snappy banter between equals rather than a "damsel in distress" relationship. Excited to see where these two go in future "Despicable Me" movies.

But those adorable minions really steal the show with their antics. They're just so cute, and they have a habit of breaking into song at a moment's notice. Their version of the 1990s ballad "I Swear" is a highlight of the movie. At one point, they're all kidnapped and end up on a tropical island, with "The Love Boat" theme playing in the background. Minions love to party and have fun!

The plot is simple and sweet, which is good because it lets the characters shine through. The movie also has a wonderful soundtrack that reminds me of "The Incredibles" spy-music soundtrack, and includes some really fun tunes by Pharrell Williams, including the upbeat "Happy." Check out the lyric video on the Reel Life With Jane site.

The beauty of the "Despicable Me" movies is that they combine the action and intrigue of spy movies with the joy of being part of a family. Gru may never leave his life of action behind, but first and foremost, he's a doting father to those three adorable girls. He will do anything for his kids, whether it's being there for Margo when a teenage boy breaks her heart or hugging Agnes when she has trouble reciting a poem about mothers. Gru is a true super dad who will always be there for his kids.

"Despicable Me 2" is truly the perfect family movie.