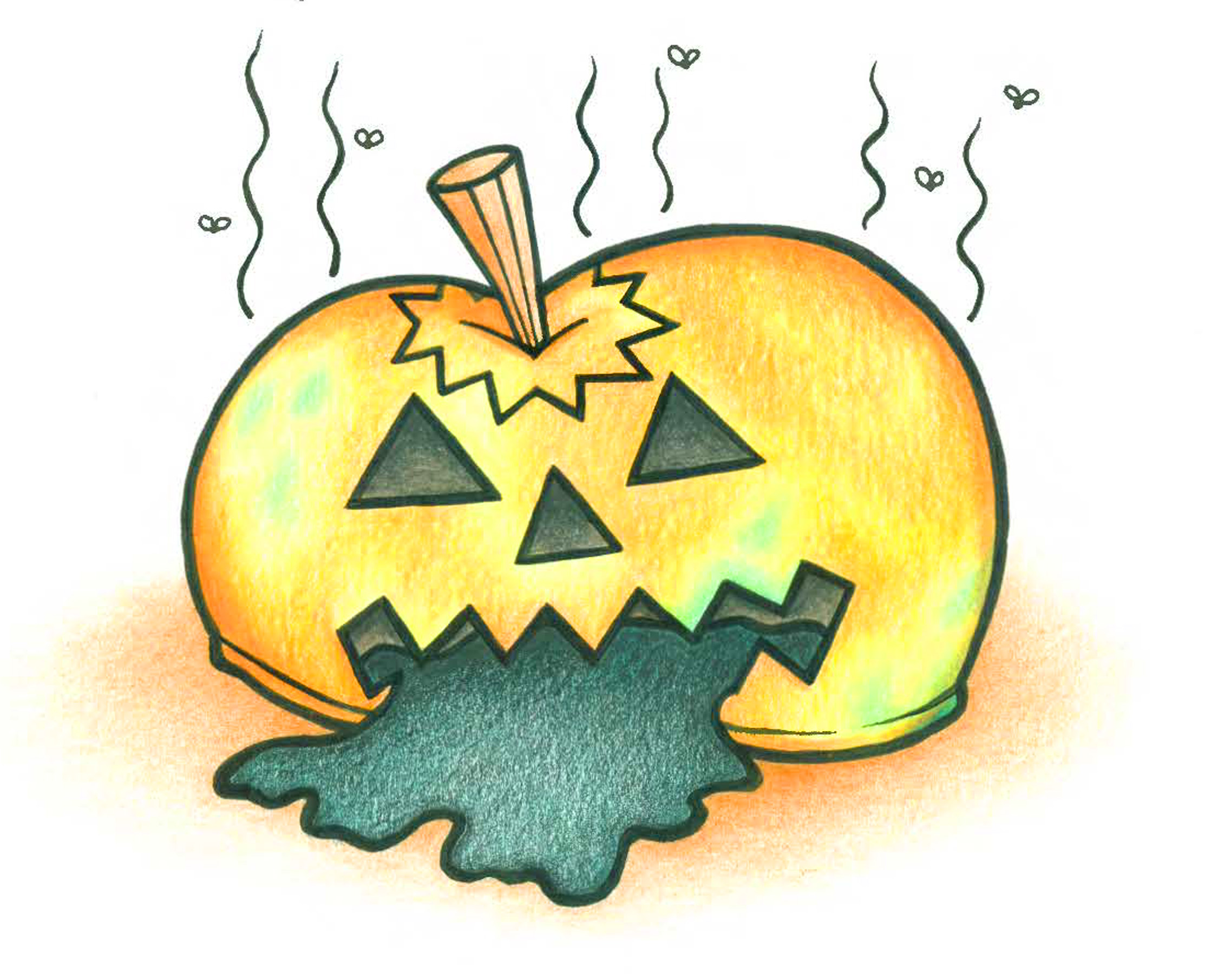 Last October (yes, a year ago), I bought several pumpkins at the local discount store. I do not buy the biggest or most expensive for this reason alone: The Daughters will each design a pumpkin, begin carving, get grossed out and then Brian and I will finish the job just in time for the neighborhood kids to steal it and smash it in the street. Call me an Orange Grinch, but I won’t spend big bucks on pumpkins.

Imagine the thrill of my family when I found pumpkins on sale for $2.50 each. They hadn’t been pre-carved nor were they rotting. So I snatched up one for each daughter, two for the thieving neighborhood kids and three to hang out inside until after Halloween to serve as Thanksgiving decorations as well. I felt like the most brilliant homemaker on the planet. Watch out, Martha—I was finding bargains and out-smarting teenage boys.

Halloween came and went and so did the carved pumpkins and the two freebies. I put another pumpkin out because I was using two for a centerpiece in the dining room and to hold down papers that I needed to sign and return to school.

Within a day of the Thanksgiving pumpkin’s appearance, that sucker was gone like a Reese’s on Halloween night! The little turkeys were still in the spirit of mischief. I waited a week. I’m no chump. You’ve gotta get up pretty early to fool Momma. Really early. Like between 7:00 and 8:00 a.m. One Monday morning, I set the next pumpkin out. There were no footsteps in the dew across our lawn, so I can only assume that the little neighborhood pumpkin pickers has been waiting on my roof and lowered themselves on one of those cool looking rope-type things that they used in the movie, The Matrix.

Soon, I had forgotten that I still had another pumpkin to put out and the week of Thanksgiving, I was feeling charitable. I set my last pumpkin out. I set it right in the corner of the front flowerbed, which we had cleared but not done much else with. The pumpkin stayed! I felt like I had won a minor victory for outdoor decorators everywhere!

The day after Thanksgiving, when we were decorating for the Christmas holidays, I completely forgot about my last little pumpkin. The outside of the house is Brian’s domain, so he noticed the rotting pumpkin, but chose not to do anything about it. After years of being my mate in life, he knew to leave certain things alone unless he was told specifically what to do with them. Smart man.

Then it was January and my pumpkin, limp and moldy, stayed in its spot. Valentine’s Day rolled around and as I set out my Hearts flag in our non-existent flower bed, I thought about getting a shovel and scooping the pile of mush out, but it was cold.

Spring came in like a lion, and we discussed what to do with the front flowerbed. Still the pumpkin sat. Over spring break, my cousin came to visit. I told her that she’d know she was at the right house because of the rotted pumpkin. She said that bit of trivia was very helpful. Just before Memorial Day, my in-laws put in their garden (which occupies approximately 12 acres and houses every vegetable known to man except mushrooms). My friend FloJo put in her garden. Me? I grew a pumpkin. See, while life went on, the last pumpkin had taken root and regrown.

It was the circle of life! And my lazy self could take sole responsibility for it! The Daughters had big plans to take a pumpkin for every single one of their little friends at school. We were going to save the seeds from the dozens of pumpkins we’d carve and plant a real pumpkin patch for next year. I even planned to pile the pumpkins in the front yard and paint a bull’s eye in the middle of the road for the tricksters. Life was good.

Then, Brian decided it was time we did something, anything, with the front flowerbed. He got a Garden Claw and clawed up the bed. Yes, my friends, that’s right. The pumpkin vine was clawed. As our daughters and I stood in the front yard sobbing at him about what a monster he was, he realized (yet again) that he was outnumbered, and he salvaged what he could of the vine.

I’ll be darned if that little pumpkin’s off-shoot didn’t take hold and grow some more, this time with blooms, five to be exact! We WERE going to have pumpkins after all. We were so excited that we celebrated with a very fancy dinner: frozen pizza on the good china! For this feast, our younger daughter picked five pretty orange blooms and put them in a vase and plopped them down right in the middle of the table just as we served up the triple meat deluxe special.

Brian and I looked at each other and said not one word. Our pumpkin dreams for this year were carved up and splatted in the middle of life’s crazy road. Later that night we decided that we’d go get some pumpkins and place them around the vine for the girls to find and let them experience a little bit of the magic of the season. The Great Pumpkin does exist!

Heather Davis is an Oklahoma momma and a writer, and is still looking for ways to relax. She’s the author of the TMI Mom books, available on Amazon. She and her husband live in Bartlesville with their two dogs, two cats and two daughters.