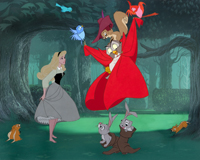 The Fred Jones Jr. Museum of Art is “all ears” this spring as it premieres a new exhibition of Walt Disney animation cels, including Mickey Mouse and dozens of characters from classic Disney films. A Century of Magic: The Animation of the Walt Disney Studios, Animation Cels from the Collection of Janis Scaramucci and Domer “Jay” Scaramucci is open from March 3 – September 16.

The exhibit surveys many of the major animated films, beginning with the first feature, Snow White and the Seven Dwarfs (1937), and concluding with Fantasia/2000 (1999). This exhibition, from a private collection, includes more than 80 cels used in the original production of the animated films and offers visitors the opportunity to view the artistry of the animators’ work.

“Children and adults alike will enjoy this look at Mr. Disney’s magical world of animation,” said Ghislain d’Humières, museum director. “As a matter of fact, we are using this opportunity to lower the artwork a bit for our younger visitors.”

Throughout the spring, the museum will host multiple free programs around the exhibition, including viewings of popular Disney films, a multimedia concert and more. Upcoming events include:

The Fred Jones Jr. Museum of Art (555 Elm Avenue) is located in the OU Arts District on the University of Oklahoma’s Norman campus. Admission is free on Tuesdays. For more information, call 405-325-4272 or visit www.ou.edu/fjjma.