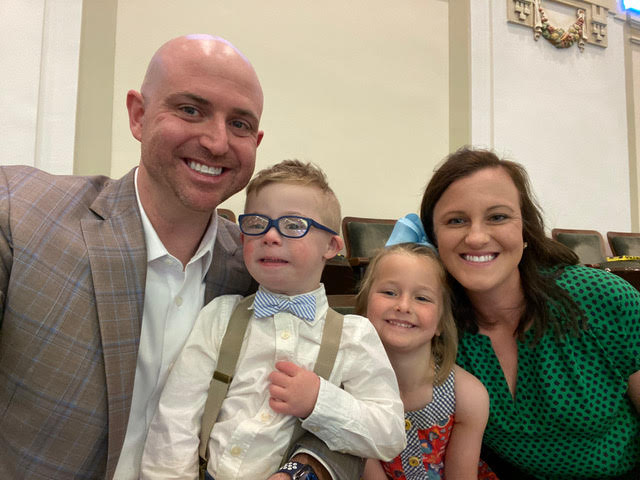 Our son Everett is an energetic, happy 4-year-old. He enjoys school, dancing, soccer and playing with his siblings. When he was born, my husband and I were surprised to find out he was 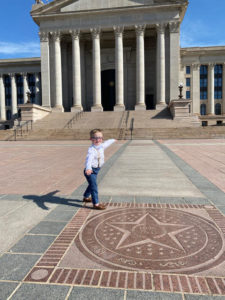 diagnosed with Down syndrome. A day after, we learned he had a hole in his heart and that it would require open heart surgery. I was immediately thrown into my role as being a ‘medical mom’ and an advocate for my son.

Throughout Everett’s short life, we have gone through six surgeries, with many of them requiring hospital stays and the most challenging and scary being open heart surgery. It was during our stay in the Cardiac ICU, after his surgery, that we met several families with their children awaiting heart transplants and learned that many states lack protections for individuals with disabilities regarding organ transplants. This meant that individuals could either be denied or passed in line while waiting for an organ transplant solely due to their disability. Learning this never left my husband’s or my mind.

Years later, we heard of a parent in a different state who advocated for a law that solved the organ transplant issue. We immediately knew we wanted to implement this change in Oklahoma. Minus the surgeries, we have been fortunate that Everett has been pretty healthy, but the worst-case scenario was always in the back of our mind.

Our first step in this process was getting a draft bill put together and finding a sponsor in either the house or the senate. The first senator we spoke with was very excited about the cause and was eager to sponsor the bill.

Bills are assigned an identification number and categorized as HB or SB depending on if they are introduced in the House or Senate (for example, “Everett’s Law” was assigned SB378). This is helpful for citizens to track the bill, as there are websites that detail out where the bill is in the process. During the path from our bill moving to law, we participated in 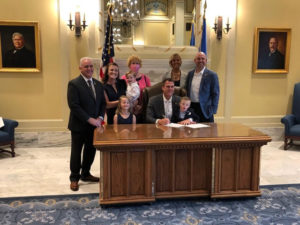 committee meetings, witnessed the floor vote for it in the Senate and then did the process all over again as it moved along on the House of Representatives side. After our bill passed both the Senate and the House, it went to the governor’s desk for his consideration to sign. It was such an exciting experience and our 6-year-old daughter still talks about it and points out the Capitol every time we drive by.

“Everett’s Law” was signed into law by Gov. Kevin Stitt on April 20, 2021, making what was once just a “good thought” into a legitimate law in Oklahoma. There were a lot of tears as well as cheering in our house that day.

The most helpful tool during this process was by far social media. We were able to reach a very large audience in Oklahoma through Facebook and having individuals share our post. In the posts we asked that individuals call or email their legislators asking them to vote yes on “Everett’s Law,” and did they ever! More than 2,000 e-mails were sent to legislators throughout the session.

Throughout all of this, I learned that we all have the power to make changes. If there is a change you are passionate about and would like to see implemented, I encourage you to reach out to your senator or representative. It’s easy to be intimidated by elected officials but it’s important to know to not be. They are here to represent you and the 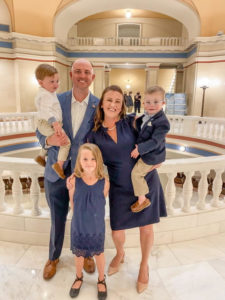 issues that are important to you and the community. We as citizens all have a voice.

Neely is a mother of three living in Edmond. She recently made the shift from a corporate career to staying at home with her children. When she’s not busy with the kids, she enjoys advocating for Down syndrome. You can follow her on Instagram at @mrsneelygay.