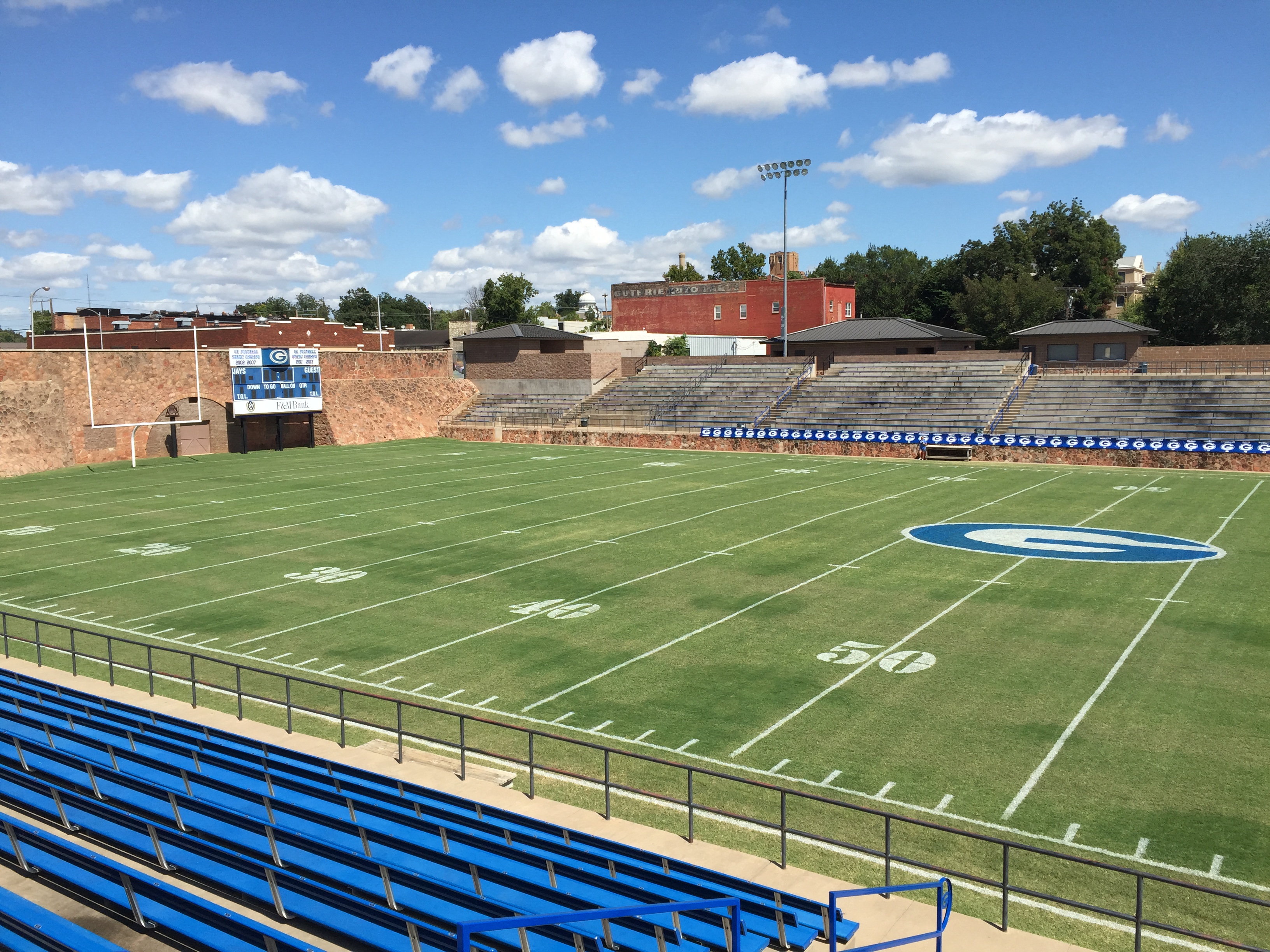 For many, it’s just not fall without football. Whether you’re the world’s biggest sports fan or you like the season just for the concessions and the marching band, there are tons of opportunities for you to soak up some Friday night lights in the Oklahoma City metro. We’ve rounded up our best local venues for watching live football and some family-friendly places where you can watch televised games on the big screen.

Why We Love It: Perhaps one of the greatest local football experiences happens at Guthrie’s Jelsma Stadium. The stadium sits in the heart of downtown Guthrie and is called The Rock because of its unique 30-foot sandstone wall in the north end zone. ESPN has even named The Rock one of the best high school stadiums in the country for high school football.

Arrive at the stadium by 5 p.m. to take part in tailgating. Harrison Avenue is blocked off for fans to enjoy hot dogs, hamburgers and the band comes out to get fans pumped for kickoff.

As if the small-town excitement wasn’t enough reason to head to Guthrie for a game, the team is going on a 35-game winning streak at The Rock and they’ve won four state titles in the past 13 years.

Why We Love It: Another exciting Friday night experience can be found at Millwood’s L.W. Good Stadium and Leodies Robinson Field. The Millwood Falcons have several state championships under their belts and fans love attending their home games for the unique layout of the stadium, which is surrounded on three sides by steep grass hills. The games pack in many more fans than what can fit in traditional bleachers and the entire stadium buzzes with excitement.

Why We Love It: Terrific football is played by a handful of great local teams at Wantland Stadium. The UCO Bronchos have played here more than 50 years and Edmond high schools also flock to the field on Friday nights. Games at this stadium offer an exciting opportunity for families to see high school athletes play with state-of-the-art features like artificial turf, a three-level pressbox and impressive lighting and scoreboard.

Why We Love It: This Oklahoma City venue is the closest you’ll get to tailgating without actually going to a stadium. Food trucks line up to feed hungry fans and the outdoor dining court is lined with televisions where you can watch the action. Parents like this venue because the outdoor environment is family-friendly and has lawn games to keep little ones entertained.

Why We Love It: If you want to get close to the Memorial Stadium action in Norman without actually buying tickets to the game, The Garage in Norman is a great place to head with the whole family. The burger joint has a steady menu of hearty food to keep you full while you watch the game on big television screens in the restaurant. They even have some games in the back of the restaurant to occupy older kids.

Why We Love It: This Stillwater pizza stop is a must for true Pokes fans. There are plenty of Hideaway restaurants in Oklahoma City, but nothing compares to the original pizza joint. Enjoy the camaraderie of dining on delicious pizza among other Cowboys and Cowgirls while you watch the televised game. On home game days, the very-nearby OSU campus serves as the site of one of the top 25 tailgating experiences in the country according to The Daily Meal.