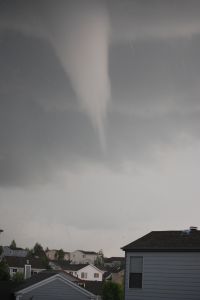 It’s that time of year again. Temperatures are warming and thunderstorms are becoming frequent as the seasons change. Of course, following closely on the heels of those claps of thunder and flashes of lightning is the threat of severe weather, especially tornadoes.

According to the Storm Prediction Center, an average of 1,000 tornadoes are reported across the country each year, most of them mistakenly believed to occur only in places like Kansas or Oklahoma. The truth is that since researchers began regularly recording tornado strikes, nearly every state has experienced a tornado. So, regardless of where you live—in the heart of Tornado Alley or the fringes of Dixie Alley, in the remote areas of the West or the sprawling suburbs of the Northeast—it’s important to know the facts about tornadoes and what you should do to protect your family.

Myth #1: Open windows to equalize pressure in the house.

Truth: It may be more dangerous.

According to Dr. John Schroeder, director of the Wind Science and Engineering Research Center at Texas Tech, this is a common misunderstanding—and a deadly one. “Keep your windows closed,” he says. “Opening a window has the potential to actually make things worse by allowing wind to create internal pressure.”

In most cases, you only have a few minutes or even seconds to escape a tornado. Immediately move your family to the basement or innermost room of the house, away from windows and exterior walls. An interior bathroom or closet is a good choice if you don’t have a basement. Cover yourself with thick blankets, a mattress, or other layer of protection from the debris and stay there until the storm has passed and the tornado warning has expired.

Myth #2: Overpasses are a safe place to take shelter.

Truth: Never park under an overpass or try to outrun a twister.

“Many people have seen a video of a camera crew taking shelter under the bridge as a tornado passes over,” Dr. Schroeder says. “While the camera crew survived the tornado and bridges are typically stable, the wind flow is accelerated through the confined space between the bridge and the road creating an even worse situation.”

Instead, he suggests that you’re better off in a ditch. Get out of your car and lay flat on the ground, covering your head with your hands.

Myth #3: Tornadoes are easy to see when they form.

While movies such as the cult classic Twister or the Discovery Channel’s docudrama “Tornado Chasers” often show tornadoes as easily identifiable columns of wind, some are virtually invisible. Sometimes, tornadoes get wrapped in rain and are difficult to see or the condensation funnel—the trunk of the tornado—is clouded by dust and debris. And many tornadoes strike in the evening when it’s too dark to see them.

Don’t take chances. If there is a tornado warning, seek shelter immediately, even if you can’t see a funnel.

Truth: Yes, they can.

While there is some truth to the idea that tornadoes can be unpredictable, they don’t pay much attention to geography. Dr. Thomas Grazulis, author of The Tornado: Nature’s Ultimate Windstorm, suggests that these myths about where tornadoes can and cannot strike persist because they’re difficult to dispel. “People hold tightly to these myths,” he writes, “just in case they might be true.”

The reality is that tornadoes can strike nearly anywhere. In the late 1980s, a tornado swept through Yellowstone National Park, leaving a path of destruction up and down a 10,000-foot mountain, and dozens of big cities have been hit across the country. From Nashville to Salt Lake City and from New York to Fort Worth, no metropolitan area is out of harm’s way.

In fact, Dr. Grazulis warns that given the increasing concentration of populations in big cities and the continued expansion of the suburbs, metropolitan areas are at risk. “It seems inevitable,” he notes, “that a killer tornado with a death toll of one hundred or more people will strike the United States sometime in the future.”

The peak time for tornadoes in any given region is usually springtime, early summer, and again in fall, when seasonal temperature differences encourage the clash of cold dry air and moist, warm air over the landscape. This is when you’ll want to pay particular attention to weather reports, invest in a NOAA (National Oceanic and Atmospheric Administration) Weather Radio, and keep an eye to the sky. After all, the best protection against a tornado is knowledge and understanding the difference between fact and fiction can keep your family safe.

To find out more about tornadoes and tornado safety, visit: ncdc.noaa.gov/oa/climate/severeweather/tornadoes.html

What To Do During a Tornado

What To Do if Damage is Sustained

Jen Henderson is a freelance journalist and university instructor in Virginia who writes about issues of health, sustainability, and weather safety. Learn more at jenhenderson.com.