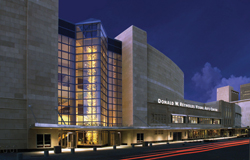 The Oklahoma Museum of Art (OKC MOA) as we know it today celebrated its grand opening on March 16, 2002, and over 10,000 visitors showed up that opening weekend.“We didn’t do a major marketing campaign,” said OKC MOA Communications Director Leslie Spears, “and we didn’t know if people were going to come.” But they did come. In fact, the line to enter the museum stretched around the block. Everyone came out to see this new venue for art in Oklahoma City. And they continue to come today.

Before opening this new building on the former site of the historic Centre Theater, the museum had a long and storied history, going back to the early 1900s when the Oklahoma Art League was begun. The League’s mission was to foster a love and taste for art in the city, and to establish a permanent museum of art.

By the late 1990s, the Legacy Campaign was launched to raise funds for a new building, culminating in a groundbreaking for the newly-named Oklahoma City Museum of Art at its current site in April, 2000.

When first approaching the museum, visitors are immediately greeted by the 55-foot tall Eleanor Blake Kirkpatrick Memorial Tower—exactly as the museum was planned. The tower, composed of 2,100 hand-blown pieces of glass, was created by renowned glass artist Dale Chihuly specifically for the museum.

“The board wanted a focal piece of art,” said Whitney Cross, the museum’s current Associate Development Officer. “They wanted something that could be seen from both inside and outside.”

The museum’s Executive Director at the time, Carolyn Hill, was instrumental in acquiring the tower, as it was a conversation between Carolyn and Chihuly’s wife (who is from Oklahoma City) that led to the acquisition.

“Chihuly’s wife, Leslie Jackson, called on Carolyn and said that she had seen great installations of Chihuly’s work around the world and wondered why it hadn’t yet made it to her home city,” said Spears. Chihuly and his architects then worked with the museum’s architects to create the structure and installation.

“Chihuly created the tower to represent Oklahoma,” explained Cross. “He said the yellow represents the Oklahoma sun, with little pops of blue for the sky.”

Highlights of the Past 10 Years

Since the OKC MOA has been open, the museum has been the site of many traveling exhibits. The first special exhibit presented was the Chihuly glass exhibit, which the museum eventually purchased for the permanent collection, and which was recently reopened to the public after being taken off exhibit in 2011. The museum raised over $3 million to make the purchase of the installation. “It was so popular that when it closed, museum visitors were disappointed that it wasn’t there when they would come to visit,” said Cross.
In 2003, the museum hosted the traveling exhibit of “George Washington: A National Treasure,” on loan from the National Portrait Gallery in Washington, D.C. “They chose us for the exhibit before we even broke ground because they were so impressed with the plan for our new building,” said Spears.

The Museum also offers much more than the vast collections of art on display in 15 different galleries. The on-site gift store contains a variety of creative gift ideas for all ages, including books on art and artists and toys. The Museum Café is one of the few full-service restaurants open during the business day in the area. And the 252-seat theater is one of only 14 Art House theaters in the country that work with the Sundance Film Festival.

The museum also boasts many architectural features from the original Centre Theater. “The Centre Theater was a glorious theater that opened in 1947,” said Spears. When the Museum purchased the location, “the architect figured out how to work in the elements (of the old theatre) and turn this into a perfect building for an art museum.” Though much of the original building was deteriorated beyond the point of saving, many elements were incorporated into the new building—including the window grills and box office at the theater entrance, the staircase and etched Plexiglas panels leading up to the mezzanine level, and two water fountains which may be found on the mezzanine level.

Along with providing a world-class art and film venue, one major goal of the museum from the start has been to offer the community a place for learning.

Public art classes started up the following week, and while they were slow to start, they continued to gain popularity. “That first summer, we held just three camps; now we’re up to 20 plus sessions a year, not counting the school year breaks.” Classes offered include drawing, painting, printmaking, yoga and more, designed for all ages.

The museum also offers free (with paid museum entrance) Drop-In Art classes each weekend, and Family Days several times each year which combine hands-on art activities, story times and more, all connecting to a current exhibit on display. “Our family programs have been so exciting,” said Boyd. “I love all the activities on those days, and I'm thrilled to have people bring their children to the museum and find ways to connect them to the arts. I have been trying to break down the barriers for families for years; art is for everyone!”

But the learning doesn’t just happen on-site at the museum. “The biggest impact we have added over the past 10 years has been in the area of community outreach,” said Boyd. “We have developed programs serving senior adults, patients suffering from Alzheimer’s disease or other memory loss, families with critically ill children visiting The Zone at OU Children’s Hospital, at-risk youth visiting their local libraries, families participating in the Philharmonic’s Discovery Concert Series and teens who have joined our Youth Arts Advocates council. Getting to those who can’t get to us has been a big goal over the past few years.”

According to Spears, the Museum will continue to grow. The board of directors has a vision for the future, and museum programs will continue to be added to meet the needs of our city.
The New Frontiers series, which brings exhibits by living artists, will continue to bring the best in current art to Oklahoma. In February, the “Princely Treasures: European Masterpieces 1600-1800 from the Victoria and Albert Museum” exhibit will bring 80 objects that highlight courtly life in Europe; and in June, the “Fusion [A New Century of Glass]” exhibit will feature contemporary glass sculptures and installations.

“It’s the 10 year anniversary exhibition, and it’s an exhibit on glass that is not Chihuly glass,” said Spears. “It’s going to be different shapes and styles of glass art, which echoes what was exhibited when the museum opened.”

A fitting tribute to celebrate the Museum’s 10th anniversary.

“Oklahoma City is fortunate to have the Oklahoma City Museum of Art, and Allied Arts is honored to be one of its supporting partners,” said Deborah McAuliffe Senner, president and CEO of Allied Arts. “The museum’s downtown facility has been integral not only to the museum’s continued growth and success, but also for the entire downtown renaissance. It’s been exciting to see the museum’s membership explode with growth, classrooms filled with kids learning about art, and lines forming to see world-class films and exhibits that are attracting Oklahomans as well as people from and all over the world,” Senner continued.

Mari Farthing is the Editor of MetroFamily Magazine.