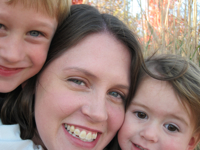 In our house, the time between Mother’s Day and Father’s Day is also known as Crazy Time.  Besides those two holidays, we have the end of school, both kids’ birthdays, our anniversary (actually two of them since we celebrate the anniversary of our first date), VBS, yearly check-ups, and my father-in-law’s birthday.  This year we spent our twelfth wedding anniversary throwing a party for our son in the morning and then attending another friend’s birthday party later in the day.  (When you get married Father’s Day weekend and then give birth during the same week a few years later, you realize you’re probably not going to have too many free anniversaries, which is why we still go out for our dating anniversary!)  To top it off, we decided to throw a vacation in the mix, too!

All of this has made for a pretty tired mama.  Other than reading time, this week we are taking a break from all things schoolish and focusing on getting back into a regular routine.  Even though we don’t do formal school through the summer, we do have a relaxed routine—after Crazy Time is over, that is; during Crazy Time it’s all about survival!

Each summer we have a few things we always like to do.  The kids always participate in the summer reading program at the library and I like to get in some extra fun reading for me, too.  We visit the splash pads a lot and swim, too, when we can.  We also usually take at least one trip to Oklahoma City to visit friends and spend time in all of our old favorite places!  In past summers we’ve tied this in with a summer camp at the Sam Noble Museum, but this summer we’re spreading out our trips around the state instead.  And of course we’re having fun with our Adventure Boxes!

We’re adding a few new fun things this summer, too!  Now that my daughter is old enough to sit through a movie—or at least be distracted by a sucker during a movie—we’re participating in the summer movie program, much to my son’s delight.  Our community center is offering a weekly program for kids, too, that we’ll try out.  If I get brave, we’ll finally try out our local pool.  Now that my daughter is a bit older and my son is a better swimmer, I think we’re ready for it.  I’m not going to tell the kids that, though, just in case I lose my courage!

I’ve got some plans just for me for the summer, too.  At the top of my list is planning for our upcoming school year.  It made such a difference last year to have so much of the work already done ahead of time!  I’m also hoping to do some big work on decluttering some closets and other trouble spots around that house—all those things I don’t get to during the rest of the year.  If I get those two things done, I’ll try to get ahead on a few writing things while I have some ideas and some time!

For this week, though, we’re getting back to the essentials and settling in to normal life.  I hope you’re having a great summer!