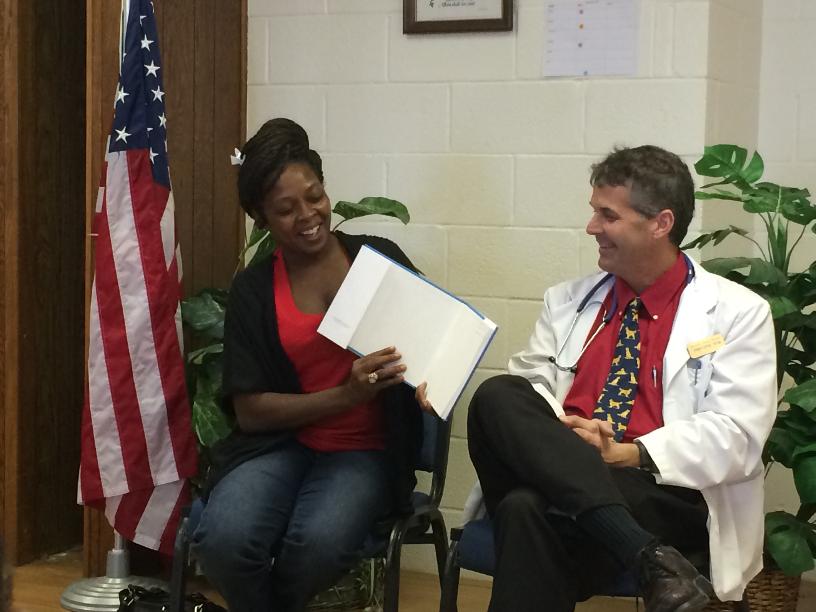 Oklahoma has one of the highest imprisonment rates in the country. Most recent statistics from the Oklahoma Department of Corrections reveal there are 26,194 incarcerated individuals in Oklahoma. Many of those people are parents, and their children are profoundly impacted.

Oklahoma City veterinarian Dr. John Otto understands the impact incarceration can have on families and children and is working locally to encourage kids with incarcerated parents and remove some of the shame they feel about their families. He started that process 18 years ago when he began working with Friends for Folks, a non-profit based out of Lexington, Oklahoma, that pairs abused and unwanted animals with qualified prisoners who serve an important role in training the dogs to prepare them for adoption. More than 100,000 dogs are euthanized each year in Oklahoma, and Otto said a leading cause for dogs ending up in shelters is that they are untrained.

Otto decided to play an important role in education about both issues by writing a book about the true story of a special inmate and his job training a life-saving dog. The book, “Marvin’s Shining Star," helps in more ways than one, he said. It not only removes some of the stigma associated with having incarcerated parents, it helps family members understand that incarcerated people can serve in important roles.

The book tells the story of Star, a lovable black puppy named for a white star on her chest. The dog was trained at the prison by an inmate named Marvin Perry. During the four years Star was trained by Perry, she learned an assortment of skills to help her become a successful search-and-rescue animals. She was even inducted into the Oklahoma Animal Hall of Fame for her work finding missing people, specifically saving the life of an Alzheimer’s patient. The work Perry, Star and Otto did together granted the release of the inmate and sparked a lifelong friendship between the veterinarian and the inmate.

This fall, Otto took the book to Oklahoma City’s Little Light Christian School, a local school for children with incarcerated parents. Children with incarcerated parents are more likely to become incarcerated themselves, but the mission of the school is to break the cycle of incarceration by encouraging and educating their students. By offering the book to Little Light Christian School students, Otto hoped to facilitate conversation about imprisonment and help the students recognize their parents still can serve important roles after incarceration. Marvin Perry’s daughter, Marva Perry, attended the event with Otto and read the book aloud to the students.

“I think it’s a great thing,” she said of the book. “If one less person is incarcerated because of it, it’s worth it."

The daughter of a prisoner herself, Marva understands the challenges the youth at the school face. She has broken the cycle of incarceration in her own family and is now a nurse in Oklahoma City.

In the 18 years Otto has worked with the prison program, he’s seen countless dogs go through the process of training. From the shelter, they’re taken to the Lexington correctional facility in Lexington, Oklahoma. The dogs are trained in everything from basic manners to complex commands. Depending on their level of training and their personalities, the dogs move on to be family pets, companions for the elderly or veterans or even service animals for the disabled.

The prison houses between five and 18 dogs at a time and each of them go through a 13-week training program with a qualified inmate. Seventy percent of animals in shelters are there because of a lack of training, Otto said, so basic training with dogs can go a long way in getting them adopted. Inmates can become trainers through the program through good behavior and a willingness to learn. The trainers must be dedicated to the program, as they are educated on how to handle the dog during the 13-week training process. Because a lack of training leads many dogs to shelters, many unwanted dogs can later be placed in homes after they learn basic commands from the prisoners. The inmates work to teach the dogs simple tasks like walking on leashes, sitting, staying and overall obedience.

After Perry spent several years training dogs at Lexington, Otto wrote to Gov. Brad Henry to ask if Perry could be paroled. His parole was granted and Perry’s friendship with the entire Otto family grew. Perry died in 2012, but Otto’s son, Payton, helped write “Marvin’s Shining Star” with his dad in remembrance of the unlikely friendship.

If you’d like to purchase the book, it’s available on Amazon. To learn more about Friends for Folks, watch a short documentary about the program called "Dogs of Lexington." Check back in our December issue to learn more about Little Light Christian School.