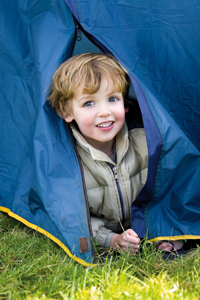 According to the RAND Corporation, a non-profit research organization, children who participate in summer programs, like the learning activities offered in an organized camp, are less likely to experience a significant summer learning slide.
Camp also enhances a child’s physical and emotional well-being. Activities found at camps are designed to build social skills, teamwork and independence, which all contribute to stronger self-confidence and leadership abilities.

“I often hear from parents how amazed they are when their children return home after spending time at camp… about how they seem older and more mature,” says Doug Berkel, senior program director of Youth Development Services with the Kansas City YMCA.

So, what’s the right camp for your child? Although there are a wide variety of choices, making a selection may be easier than you think. Together with your child, decide what skills you want your child to gain, and choose a camp that fits her needs and interests, as well as your family’s values.

Check out safety guidelines in the camp’s parent handbook. Look for overnight camps accredited by the American Camp Association (ACA). “ACA standards are the most universal and well-known standards adopted by most camps to ensure a quality and safe program,” Berkel says.

Day and specialty camps should carry a current state childcare license. Additionally, staff should be trained in emergency, communication and safety procedures, behavior management techniques (including handling the common bout of homesickness), and child abuse prevention.

Day camps are a practical way to introduce elementary-age children to the camp experience. Most center on a theme, like sports, science, nature, technology or the arts.

Ann Bowley says that when her stepson, Trevor, was younger, he enjoyed planning out the day camps he wanted to attend each summer. However, as her son got older, he grew more apprehensive about starting over with a new group of kids each week.
“We talked to him about it and he never changed his plans. We just looked for schoolmates that might be in camp with him to help him be more comfortable,” she says.

Overnight camps, typically in an outdoor setting, can last anywhere from a few days to several weeks and are generally offered for children ages seven and up. If you aren’t sure your child is ready, allow him to spend the night at friends’ houses occasionally. Or, as Berkel suggests, take advantage of a weekend family camping opportunity, usually offered in the fall and spring to familiarize campers and their families with the facilities and staff.

Preparation and an awareness of what to expect can ease the transition from home to camp. Before your child departs, go over a list of everything she will need. Pack a physical connection to home like a favorite sleeping bag, stuffed animal or pillow.
Also, mail a card ahead of time to ensure it arrives before the end of camp. Tell your child how you look forward to hearing her camp stories, but avoid saying how much you miss her which can trigger homesickness and worry.

Fourteen-year veteran Boy Scout leader, soccer coach and father of eight, John Whiteside, is a camping pro. Over the years, he and his children have participated in multiple camps, including sports, band and weeklong scout camps.

Initial nervousness isn’t unusual. If your child asks to come home, Whiteside says to consider the situation, but to encourage him to discuss his anxieties with the camp counselor and take it one day at a time. “Tell him ‘Yes, today was hard, but I think it will be better tomorrow’ and usually tomorrow is better,” he says.

While your child may struggle at first, chances are he’ll come home a happy camper with a heightened sense of self-confidence, memorable stories and a passel of new friends to boot.

Camp neophyte and freelance writer Christa Melnyk Hines expects the camp experience will be easier on her children than it will be on her.