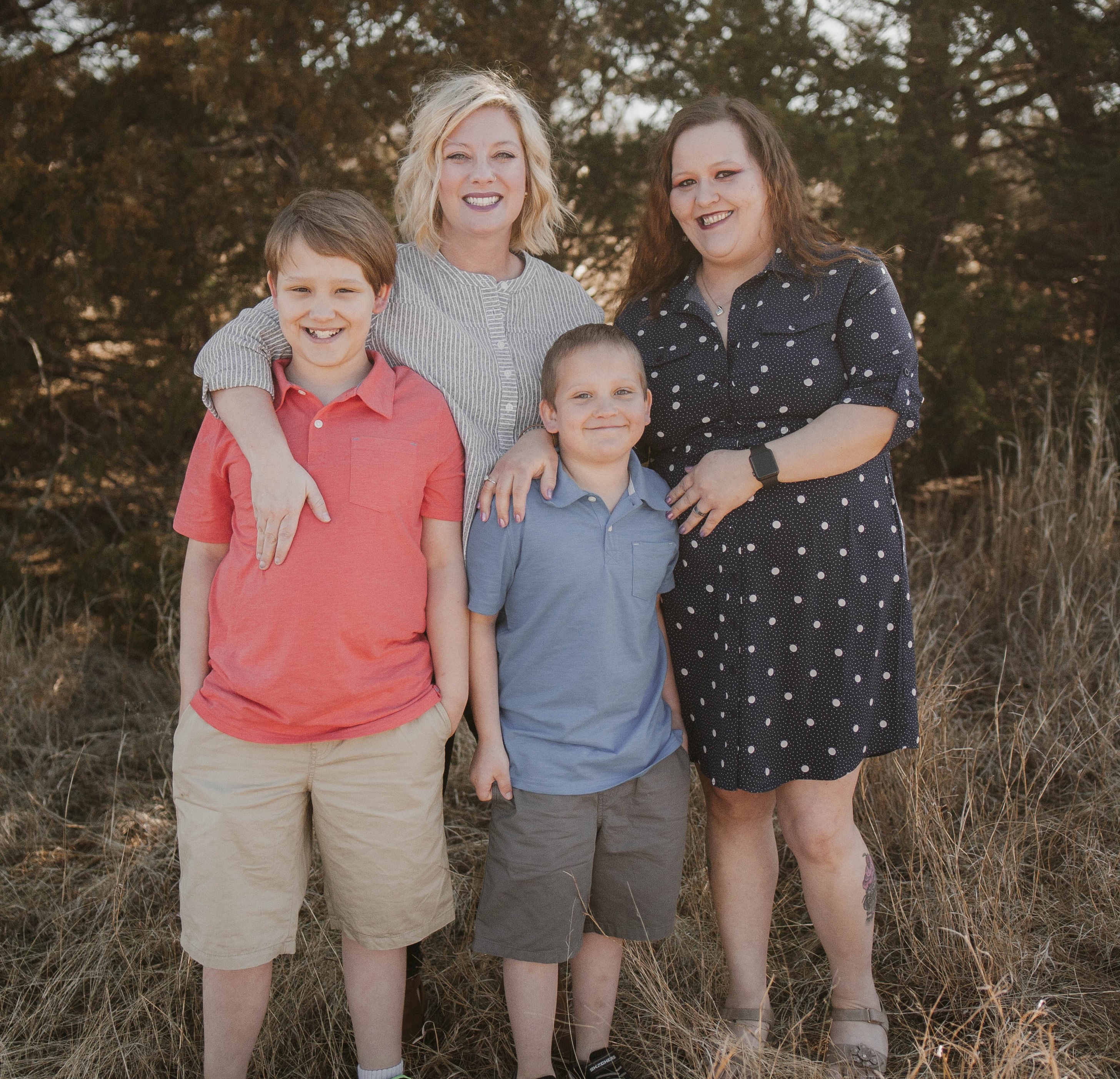 Eight years ago, Whitney Hollingsworth and Linque Gillett were inspired to become foster parents by a teen in their community who needed a foster placement. Hollingsworth is a program field representative for the Oklahoma Department of Human Services and Gillett, who previously worked for DHS, owns a law practice specializing in foster care and adoption representation. But their professional experiences and as parents of five kids plus foster children doesn’t make them immune to the emotions of their ever-changing journey.

“I have learned more about myself than I ever wanted to,” said Hollingsworth. “I can be selfish, needy and get my feelings hurt. I get embarrassed, flustered and nervous. But just because something is uncomfortable doesn’t make it wrong. It’s hard, and it’s the right thing.”

Hollingsworth and Gillett’s focus is on fostering children whose case goal is reunification. Though they haven’t said yes to every call for placement, they’ve said no very few times. They have fostered more than 40 children, helping four sets of children reunify with their families and adopting two of their foster children.

“We want to be involved in supervising visitations and giving parents the opportunity to learn parenting while doing what is needed to raise kids safely,” said Hollingsworth. “They love their kids, but because of their circumstances are not in a position to raise them. We give them the benefit of the doubt and assume this isn’t what they wanted to happen.

When a child has experienced physical or emotional trauma or neglect in their biological home, it can be hard not to have a visceral reaction to the people who caused it. But Hollingsworth has realized that regardless of the circumstances, the kids she fosters love their parents and she respects and loves those children enough to build relationships with their parents.

“How would it feel to them if I was not honoring where they came from, part of who they are, the person that made them?” Hollingsworth ponders. “And how is it possible that I can understand every person’s individual choices? I can’t get caught up in whether it looks like the way I would parent.”

Hollingsworth says cases are few and far between where abuse was so atrocious it would never be safe for biological parents to have contact with their kids. Whether permanency became reunification or adoption, all the kids her family has fostered have maintained relationships with birth parents, and she has been instrumental in that process.

After their first foster placement, Hollingsworth received a call for two brothers, likely to get separated because one needed a therapeutic foster home to help manage behavior issues. Though unsure whether they could meet their needs, Hollingsworth knew her family could at least give DHS more time to potentially find a home for them together. After keeping the brothers over a long holiday weekend, they learned the boys’ potential placement had fallen through.

“We knew it would be hard but someone has to do it,” recalls Hollingsworth of their decision to foster the brothers. “He’s a four year-old kid who is valuable. If his needs can be met in my home, then I will try my best to do it.”

Four-year-old Cavin had been in 10 foster homes within 90 days, and there were periods of time when he and younger brother Aric’s mom, Miranda Wietelman, didn’t know where her boys were or who was caring for them.

“It was already a horrible experience and then to not know who the people are in charge of your kids … I didn’t know where they were or if they were safe,” said Wietelman.

When Wietelman first met Hollingsworth, she was wary.

“I was really angry, and anyone contributing to my kids not being with me was the enemy,” said Wietelman. “Initially, I saw her that way, but she was nice about it and she understood.”

Slowly, the two developed a relationship as Wietelman saw her boys were well cared for. Hollingsworth invited her into her home to visit the boys or put them to bed, or took the boys to her when she couldn’t make it to see them. Wietelman was shocked when Hollingworth told their case workers she wouldn’t put Cavin on medication for ADHD without Wietelman’s consent, knowing Wietelman had misgivings.

“She didn’t have to take what I said into consideration, but she made me feel like I was a person and what I thought or said mattered,” said Wietelman, who says an abusive relationship and subsequent removal of her kids shattered her self-esteem.

“Whitney told me it wasn’t my fault and that we were going to deal with it together.”

When Wietelman’s youngest son started calling Hollingsworth ‘mommy,’ she was relieved instead of offended.

“He started calling her mommy because he trusts her,” said Wietelman. “They need to be safe and cared for and loved. If they can’t be with me, they need someone to love them like that.”

Though determined to work together, the mothers’ relationship wasn’t without strain. Cavin and Aric remained in foster care for nearly four years, an extensive time by Oklahoma foster care standards which is 20 months (Adoption and Foster Care Analysis and Reporting System, 2015).

Hollingsworth recalls a particularly charged conversation after a court proceeding as consideration was given to terminate Wietelman’s parental rights.

“I told her her kids were languishing in foster care,” said Hollingsworth. “This is stressful for them, they aren’t capable of living between two homes and they need a plan for their future.”

When Hollingsworth implored her to work harder to complete her court-ordered plan or sign over parental rights, Wietelman considered asking Hollingsworth and Gillett to adopt her sons.

“I felt like they had a better life with them,” said Wietelman. “They were better able to provide, have a nicer house. To me, she was a much better mom than I could ever be. But she said, ‘no, they are better with you because you are their mom.’”

Hollingsworth’s faith in her, and her boys’ desire to come home despite their love of their foster family, gave Wietelman the courage to overcome her anger and selfdoubt.

Weitelman fought to complete her degree to become a medical assistant, opting to pay for school over her electric bill in her final month. She pushed back her final court date so she could earn her degree before her boys came home, knowing she couldn’t properly care for them while in school or afford daycare.

The delays frustrated Hollingsworth at the time but she has since realized Wietelman was fighting to give her boys consistency and stability.

“She was right about what was in her family’s best interest,” said Hollingsworth. “She decided what her boys needed from her, to have an office job where she is respected and contributes to the well-being of others, and she did it.”

Wietelman’s boys came home the weekend before she graduated.

“I was determined to finish, to set a good example for them that if you finish school and do well you can have a better job and a better life,” said Wietelman.

That life includes an ongoing relationship with the family who raised her boys for nearly four years. Even with her stable job, Wietelman occasionally struggles financially or with how to parent her boys’ sometimes challenging behaviors.

“Having my kids taken away was the worst thing that’s happened to me, but it’s been a blessing in disguise because we have gained a family,” said Wietelman. “We have a support system we didn’t have before. It’s tough to be a parent, no matter what your situation is, even if you’re not struggling.”

The families celebrate the holidays and plan the boys’ birthdays together, and the boys occasionally stay the night with their former foster family. Hollingsworth purchases shoes or school supplies for the boys, helps enroll them in sports, takes them to get their hair cut and has even helped with some medical bills. Wietelman says Hollingsworth readily provides a listening ear or advice without judgment.

“I don’t think she even realizes how much things like that help when things are tough,” said Wietelman. “They’ve never had alternative motives for what they do, they are just good people.”

Wietelman began to see that selflessness when she first got to know Hollingsworth and Gillett. At the time, the family was in the process of adopting daughter Archer, who has kept an ongoing relationship with her birth mom. While Archer’s birth mom was in prison Hollingsworth took her to visit, they also celebrate holidays together and host her biological family for birthday parties. Before being imprisoned, Archer’s birth mom made the difficult decision to relinquish her parental rights and asked Hollingsworth and Gillett to adopt her daughter.

“She relinquished not because she didn’t love her or she wasn’t worth the work but because she couldn’t care for her,” said Hollingsworth. “She couldn’t provide a safe home and knew it was unfair for her to continue to bond in a foster home and then get taken away.”

Hollingsworth feels extremely fortunate that Archer’s birth mom is respectful of their role in their daughter’s life and appreciates the care they provide her. But managing expectations, open communication and high emotions isn’t always easy for either party.

When 6-year-old Archer is bent out of shape for being put in time out, saying “I miss my real mom,” Hollingsworth swallows the sting, honors Archer’s feelings and texts her birth mom so they can share in the humor of the situation together. When Archer’s birth mom recently offered to host her sixth birthday party, it took Hollingsworth, who wasn’t sure she wanted to surrender those honors, a deep breath and phone call to realize she simply wanted to plan a special event for Archer’s biological family, taking the pressure off Hollingsworth for hosting as she’s done in the past.

“My feelings aren’t always logical, so I have to make decisions based on my commitment to my daughter and her birth mom,” said Hollingsworth.

While Hollingsworth and Gillett want to control the narrative of the relationship, it’s most important that Archer know how loved she is, by them and her birth mom.

Communication has been paramount in the family’s last 14 months fostering a nonambulatory child with cerebral palsy. Though initially they agreed to foster her for a few weeks, when the placement became more long-term, Hollingsworth asked their DHS worker to help with transportation to therapy and doctor appointments occasionally and developed a schedule with her employer to come in late a few times a week.

“We have made it work and it has been a joy to care for her,” said Hollingsworth.

When asked if she and Gillett worry about their kids being exposed to the challenges of the foster care system and the trauma their foster siblings have endured, Hollingsworth replies she’d be worried about her kids in today’s world no matter what. Fostering has made her a more intentional parent, grown her family’s faith and allowed she and Gillett to teach their children what it looks like to live out God’s calling for them to care for others.

“I hope when I die, I am exhausted and my body is worn, my hands are tired and my heart is full,” said Hollingsworth. “When my kids look back, I hope they remember things like sticker books and thoughtful gestures on their birthdays, but mostly that that their parents valued caring for others.” 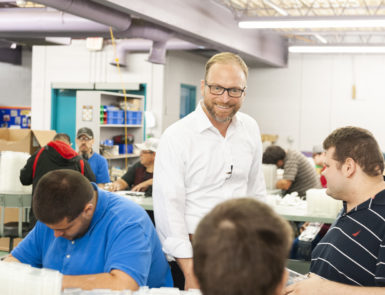 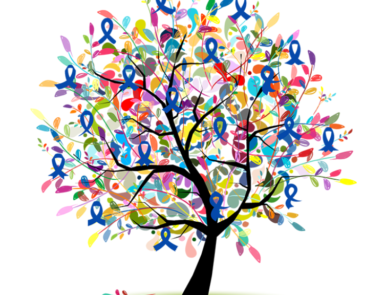 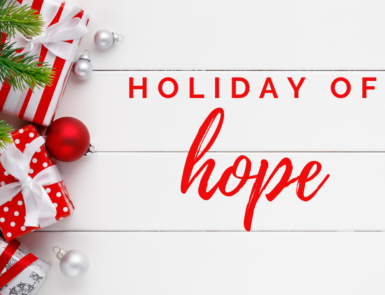 Provide a holiday of hope through OKDHS