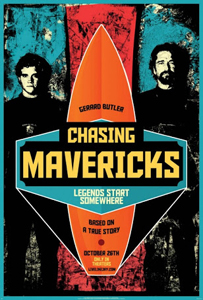 SYNOPSIS: When young Jay Moriarty (Jonny Weston) discovers that the mythic Mavericks surf break, one of the biggest waves on Earth, exists just miles from his Santa Cruz home, he enlists the help of local legend Frosty Hesson (Gerard Butler) to train him to survive it.

Sex/Nudity: One kiss between teens in love. A married couple kisses briefly.

Violence/Gore: Lots of surfing tension with waves, rocks, sharks, etc. Surfers are bruised and bloody from the crashing waves. A young wife and mom has a stroke and dies. A young man is shown moments before he drowns. A teen bully smashes a car mirror with a bat. A teen tackles a man who physically threatens his mother. Teens argue and nearly fight. Spoiler Alert: A character eventually dies while surfing.

Drugs/Alcohol: A mother drinks; her young son smells her beverage as she's passed out in bed, then pours it out in the sink. A teen appears to be selling drugs, though the drugs are never shown.

Will Parents Like It? There's no shortage of surfing movies with big life lessons, but this is a solid movie with a positive message, and the ocean footage is beautiful.

I have a little problem with that, especially when the surfers have families and responsibilities. But I guess escape through surfing is better than escape through drugs or gambling or other vices, right? Still the tagline for this movie is "live like Jay," and I'm not totally onboard with that philosophy.

One thing that sets Chasing Mavericks apart from other surfing movies is that it's based on the true story of surfing icon Jay Moriarity, played by Jonny Weston in the movie. The movie begins with 8-year-old Jay getting accidentally sucked into the roaring surf while trying to keep his friend's dog from chasing a ball into the water. Fortunately, there's an experienced surfer nearby named Frosty Hesson (Gerard Butler) who rescues Jay and takes the kids home. Turns out he and Jay live right next door to each other.

Jump ahead seven years. Young Jay is a teenager now and fascinated by surfing. Then he learns about "Mavericks," a famous wave break located a half-mile off the coast of Half Moon Bay, California — just a few miles from his house in Santa Cruz. With waves cresting as high as 50 feet, impossibly strong currents, dangerous rocks, perilous shallow reefs, and freezing water temperatures, Mavericks is the be-all-end-all for surfers.

I guess it used to be a secret in the surfing community, but that's not the case anymore (especially now that this movie is out). Apparently, it's now a huge event with an annual contest to see who can surf—and survive—the big wave.

Both Jay and Frosty are dealing with their own personal issues. Since childhood, Jay's had to be the adult to his mom (Elisabeth Shue). She drinks, can't hold a job, and borrows money from Jay's meager pizza parlor earnings. His dad abandoned them years earlier, and while Jay can't bring himself to open the one letter his dad sent him, he's still a hopeful and kind-hearted kid, especially to friend Kim (Leven Rambin), with whom he's been smitten since childhood.

Frosty, meanwhile, is still dealing with the baggage of losing both his parents early on. He uses surfing as a means of escape, even though he's married to Brenda (Abigail Spencer) and they have two kids. She understands his surfing obsession, but makes him promise to be careful, for the sake of the family. I'm not sure I'd be as open to the idea of my husband risking his life against a giant wall of water.

Jay convinces Frosty to train him how to survive Mavericks, and what begins as a mentorship turns into a unique bond, friendship, and father-son relationship. In some ways, they're alike—coping with loss and such, but they're also total opposites. Jay is earnest, optimistic and eager. Frosty is closed-off, weighed down, and grumpy. Of course, everything in Chasing Mavericks leads up to "the big wave" and whether Jay will 1) surf it, and 2) survive it.

You have to be a little crazy to be a surfer, because it seems like one of the most dangerous sports on the planet. You have to avoid crashing into the rocks, getting knocked out by flying surfboards, and being eaten by a shark. And let's not forget the giant wall of water that's probably akin to smacking into a wall of concrete if you're in the wrong place at the wrong time.

And yet, surfers around the globe view the sport as a religion. As noted in Catching Mavericks, there's a lot about surfing that translates to real life. Here are three life-lessons that Frosty teaches Jay:

Even if you're not into surfing or sports movies or family dramas, you'll probably find something to like about Chasing Mavericks. All the actors play their parts well, and the PG rating is on target. Even though it's at times dramatic and sad, I recommend it for kids 11 and older.

It also features gorgeous ocean scenery and slo-mo surfing scenes, as well as a great soundtrack (release date of Nov. 19) with tunes by Sponge, Mazzy Star, Matthew Sweet, The Lemonheads and others.