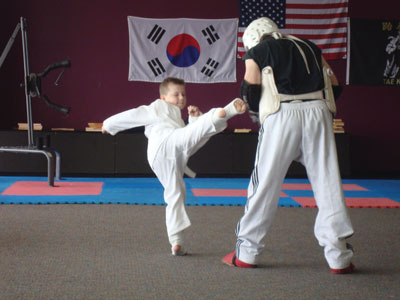 Practicing martial arts is a great way to teach kids self-control, self-discipline and respect. And two local moms also found that it can offer benefits beyond that.

Carrie Gilliland-Black and Christina Henry are both mothers of nine-year-old boys who survived childhood cancer. The surgery and treatment impacted the boys’ coordination and motor skills, but both families found that Taekwondo with Grandmaster James Ray (of All American Martial Arts in Midwest City) provided the stretching, strengthening and condition the boys needed to regain both their strength and their confidence through programs that are tailored to meet each student’s individual needs.

“Chemotherapy [took] a toll on his muscles,” said Gilliland-Black of her son Ian who at three years old was diagnosed with kidney cancer and after surgery had difficulty keeping up physically with his peers. “Ian’s pre-kindergarten teacher suggested physical therapy, but because of the high expense, I began looking at what else might help him regain his core and leg strength while protecting his back and remaining kidney from potential impact. I could see an improvement after the first month of lessons,” Gilliland-Black said. “He enjoys breaking boards, learning self defense routines and overall is encouraged by getting to hang out with his peers while doing it.”

Henry, whose son Ethan was diagnosed with a soft tissue cancer that resulted in a liver transplant at age six, noticed a similar result after Ethan’s physical therapist recommended Ethan continue taking Taekwondo lessons because it was providing him the stretching, strengthening and conditioning he needed.
“Ethan had played soccer since he was four so it was very disheartening for him to find out he wasn’t as fast as the kids he used to be faster than before cancer,” Henry said. “He has realized with Taekwondo he can go at his own pace. It’s an individual sport and Master Ray makes the kids understand that it’s OK to move at your own pace, and I’ve seen a huge improvement in Ethan’s stamina and coordination.”

Both mothers say that martial arts has helped teach their sons self control, self discipline and respect.