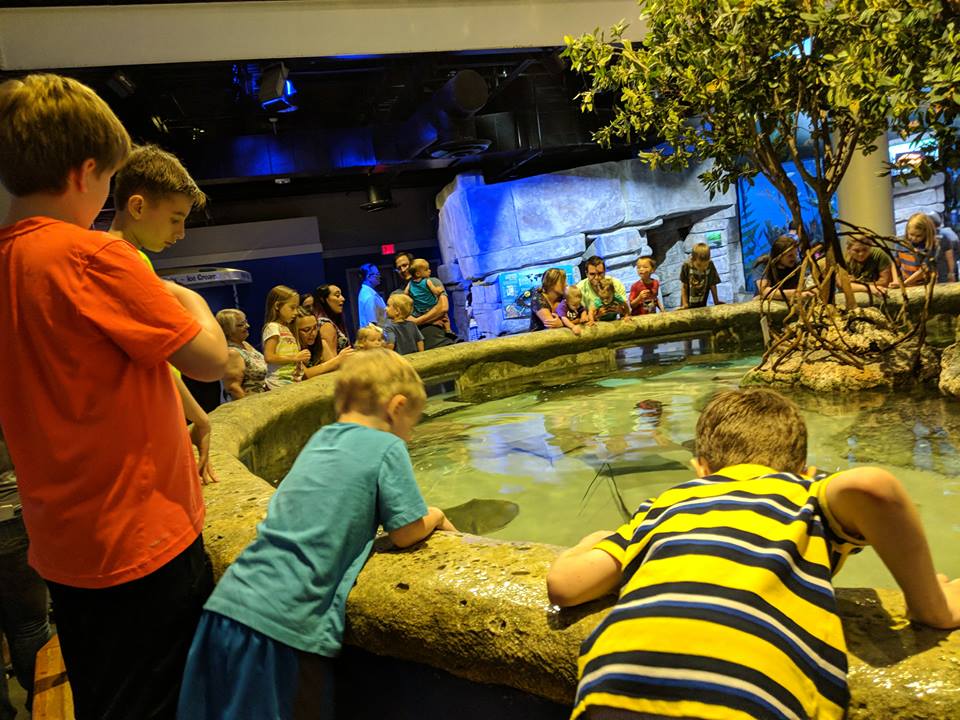 There were sharks, anemones, piranhas,  stingrays and lionfish, which are extremely rare. I’ve never been that close to a shark or even a stingray really. I love animals but we don’t live near the ocean, so I don’t always see creatures like that. It was a really long drive in the car (1.5 hours) but when we got there, I ran to see fish that glow in the dark, an otter and a giant sea turtle.

You can go sit in the yellow submarine and watch all of the sea animals go by.  I also really liked the gift shop. We bought a puzzle with whales on it and I bought a geode I cracked open with a hammer on our patio to see how it looks inside.

I thought I would want to see the bull sharks but I was afraid to go in the shark tunnel because it was dark. I was sure the sharks were going to come through the glass and eat me because they’re really strong.

Yes, other kids will like seeing cute baby sea animals, regular sea animals and land animals that live in rainforests. If you’ve watched “Wild Kratts” or a documentary on Netflix, you might have seen some of these animals before but it’s amazing to see them and touch starfish. Other kids might also be scared of the sharks but nothing will happen.

Would this experience be enjoyed by your siblings? Why or why not?

Yes, my brothers really liked seeing jellyfish and feeding the stingrays. My younger brother, Gabriel, is 3 and he liked crawling through a tunnel to get to the yellow submarine, where you can watch fish and other sea creatures go by all around you. My oldest brother, Sam, is 11 and he liked learning about the jungle best.

I would look out the window more instead of my shark book because I started to feel kind of sick on the trip there.

Does anything you learned match up with what you’re doing in school or have done before?

The zoo is kind of similar but there are more animals that live in water and a lot of sharks. I really love science so it’s also like that. People who work there learn how to help animals so they can teach people about that and just about the animals themselves. I want to be a veterinarian when I grow up but for regular pets, like dogs and cats, maybe cows, but not sharks. I have been to the beach before but these are the animals under the sea that we can’t see while we’re there because they’re deep in the ocean.

I  will remember visiting with my family and seeing the sea animals I’ve only watched on TV. When I go to bed at night, sometimes I think about how the fish float in the water and I feel more relaxed and sleepy. I think I’ll remember seeing them forever.

[Editor’s Note: Read all our Kid Reviews at www.metrofamilymagazine.com/Kid-Reviews/]