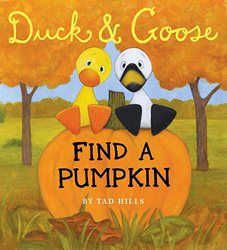 Looking for a spooky, mysterious or seasonal read for your kids? Look no further! We’ve got a great collection of fun reads for all ages.

Duck and Goose Find a Pumpkin
By Tad Hills
$11, Random House Books
Duck and Goose want nothing more than to find a pumpkin this fall! Bring your kids along on the adventure in this brightly-colored, oversized book.

Fake Mustache
by Tom Angleberger
$14, Amulet Books
What happens when Lenny’s evil genius best friend gets his mind set on world domination and his hands on a fake mustache? Silliness ensues in this rollicking read.

Monster High: Ghoul Friends Forever
by Gitty Daneshvari
$13, Little Brown Kids
Fans of the television series will love to follow the ghouls’ adventures in print, too! Friends Rochelle Goyle, Venus McFlytrap and Robecca Steam may be new to high school, but they’ll need to work quickly to overcome a plot to destroy their school.

The Sisters Grimm Book 9: The Council of Mirrors
by Michael Buckley, illustrated by Peter Ferguson
$16, Abrams Books
In the final title in the series that’s been described as “Nancy Drew meets Shrek,” the sisters face off in an epic battle to save the world.

The Wednesdays
by Julie Bourbeau, illustrated by Jason Beene
$17, Alfred A. Knopf Books
In Max’s village, the townspeople lock up their doors and windows on Wednesdays to avoid the crazy events that always take place. But when curious Max decides to find out for himself what all the fuss is about, he finds that the craziness is spreading out to the other days in his week. What’s happening? And can it be fixed?

Joshua Dread
by Lee Bacon
$17, Delacorte Books for Young Readers
Middle school is hard enough, but when you’re trying to hide the fact that your parents are supervillians that everyone is trying to take down, it might just get unbearable.

Paranorman
by Elizabeth Cody Kimmel
$16, Hachette Books
Norman is just a regular kid with the ability to see ghosts. This ability makes him less than popular among the living townspeople, but his abilities will soon be revealed as the key to saving his town from certain destruction.

The Tale of Edgar Trunk Book 1
by Jason O. Silva
$13, Thimble Publishing
Edgar must overcome his orphaned childhood spent working in the sludge factory when he discovers a mysterious door that leads to his true destiny. Pick up this Moonbeam Children’s Book Award-winner and be prepared for the sequel, due out October 31.