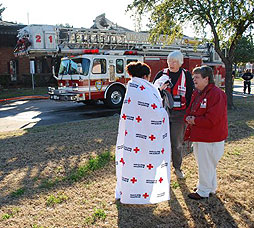 October is Fire Prevention Month and the American Red Cross is encouraging people to take steps to lessen the risk of a fire in their home.

Already this month, the American Red Cross has provided emergency assistance to 10 residents in central and western Oklahoma. According to the National Fire Protection Association, there are between 350,000 and 400,000 house fires in the United States every year. Home fires are the biggest disaster threat to families in this country, above floods and hurricanes. That’s why the American Red Cross is encouraging people to remember two key fire safety steps: installing smoke alarms and developing a fire escape plan.

"The Red Cross responded to more than 62,960 home fires in fiscal year 2011,” said Rusty Surette, Regional Director of Communications. “Fires strike suddenly and spread quickly. It’s important to take simple steps now to protect the members of your household. During a fire, every second counts and being prepared can greatly reduce the effects of these devastating disasters.”

It is recommended that people check each smoke alarm in their home by pushing the test button at least once a month and replacing batteries every year, or as needed. Fire escape plans should include at least two escape routes from every room in the home and a convenient meeting place at a safe distance from the home. Practice the escape plan at least twice a year and revise as necessary. Families are encouraged to pay particular attention to developing and regularly practicing escape plans for children and older adults.

During Fire Prevention Month, visit www.okc.redcross.org for more steps people can take to lessen the chance of a fire in their home.