Wonder rediscovered: three areas of Science Museum Oklahoma you might have walked right past but that your kids could love - MetroFamily Magazine 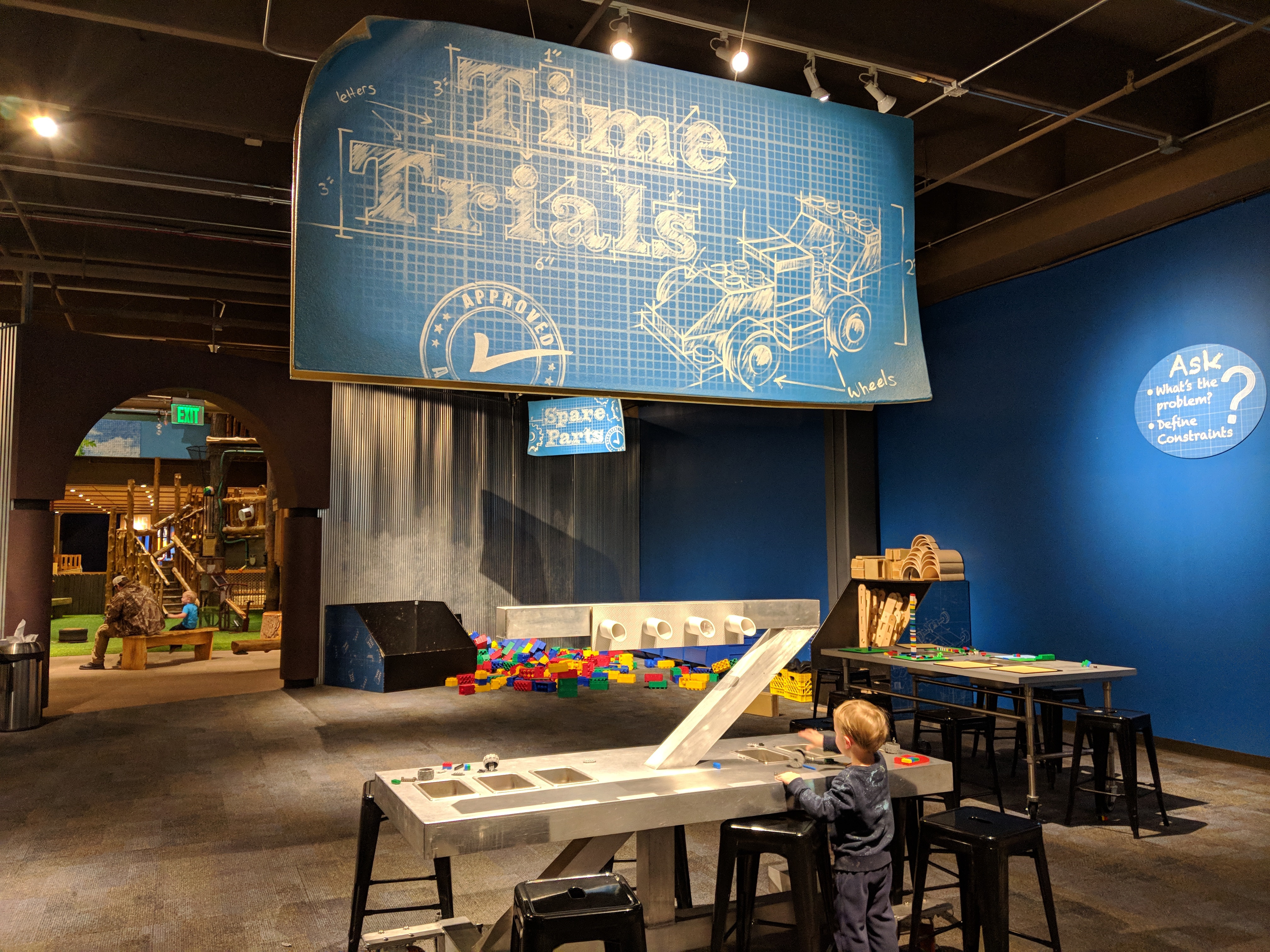 Oklahoma City family fun can feel like playing a life-wide version of "I spy" sometimes. 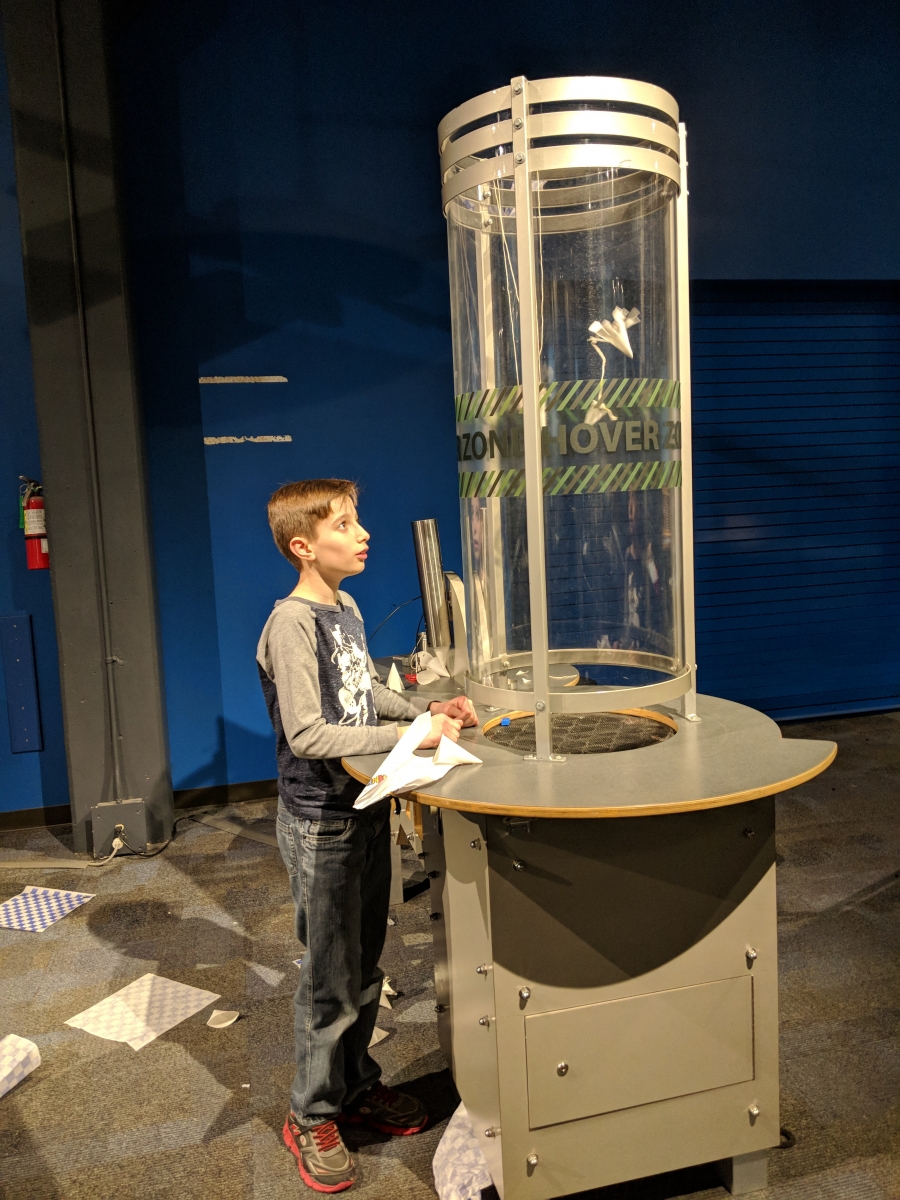 Children have this incredible ability to notice what adults right walk past and find wonder in it. I've been asked a couple of times in public forums what my favorite part of parenting is and that's it, unequivocally, because it's like rediscovering everything through them. If adults could find that kind of joy in daily living, I think the depression and anxiety that seem to stalk my generation just might fade against the sunshine of unexpected happiness.

We've visited the Science Museum several times, pressed all the buttons and marveled at the all there is to see and do. What I didn't expect my children to discover and love, though, was the museum's planetarium. I'm sure we've walked past the entrance more than once and yet, it just hadn't occurred to any of us to go inside.

A planetarium show was starting at 8 p.m. as part of the Museum's Late Nite Labs event, a hosted activities event with hands-on tables that will return in October. My sons are 10, 6 and 3 and none had ever attended anything like that. I vaguely recall the first time I 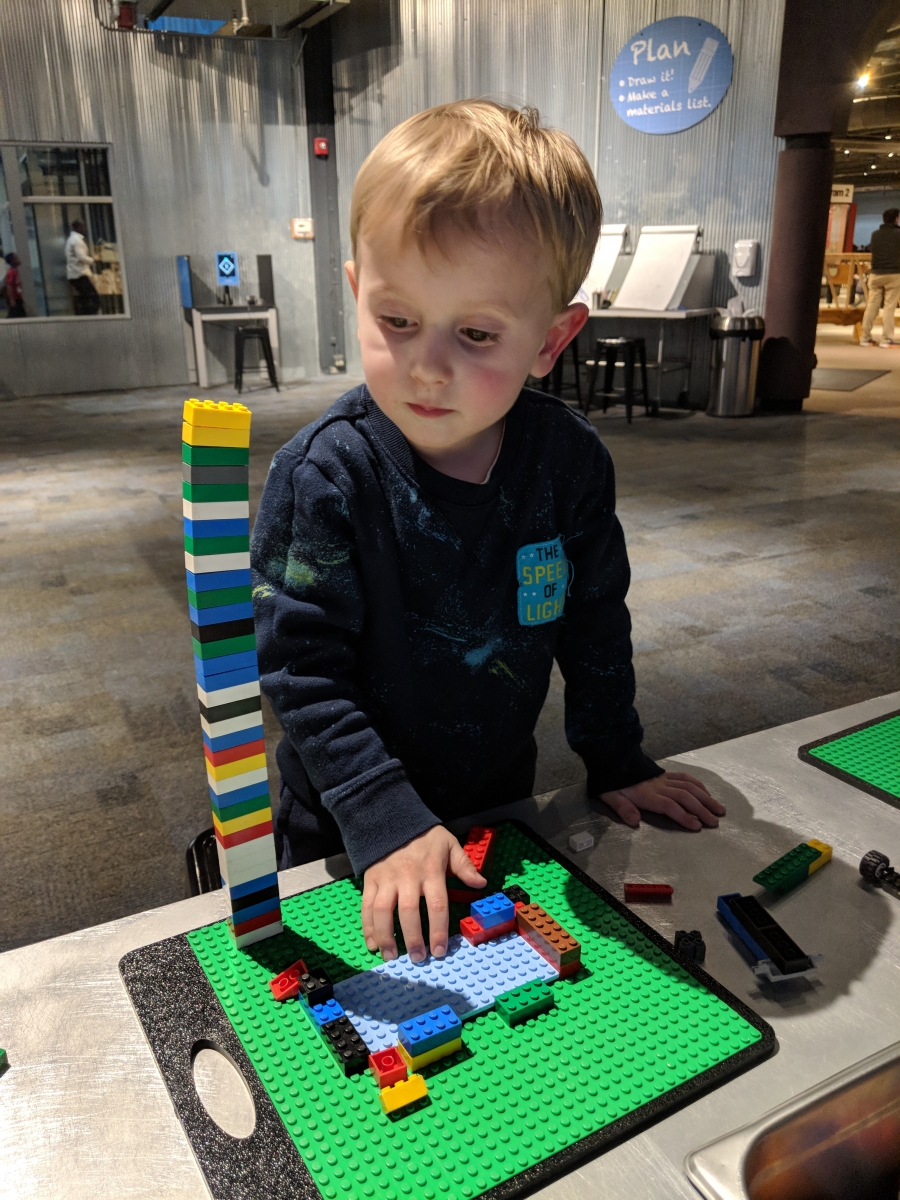 went to a planetarium but I was about 6, I think, at the Museum of the Rockies in Bozeman, Montana. Sitting in the dark with my own kindergartner waiting for the show to start as lights outlining theoretical meteors and constellation maps brought me back to being that age again, not sure of what was next as the light show took us to sunset and the promise of sunrise and all the nights in-between.

It is an odd thing to sit and marvel because we are on the go so much. The fact that no single day is promised but all the tomorrows are almost certain even if what we'll do in them isn't. We're a family of almost six, with a baby due later this spring, so time feels like it's pressing down on the five of us, a pause 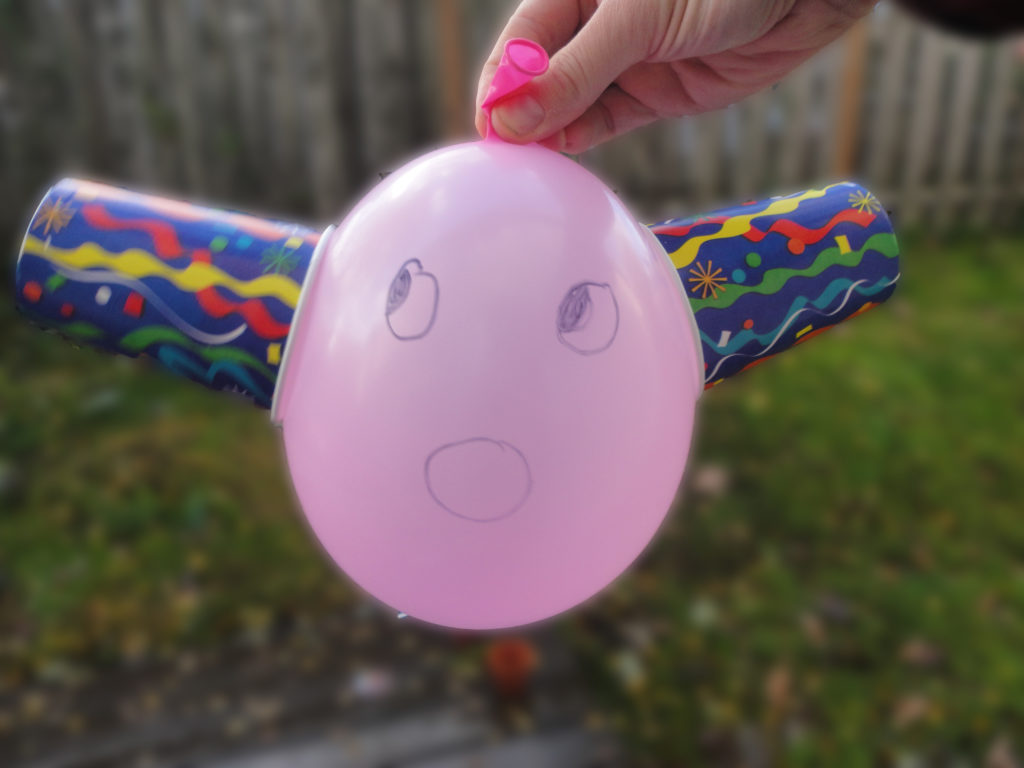 before moving ever-forward. Space and science and the mysteries of the universe don't come into my field of vision as a parent preoccupied with schedules and what's for dinner. Just then, though, they were everyone's focus and that's something beautiful in this era of constant distraction.

My sons left knowing what a planetarium is, which I don't know they didn't know, besides any facts about the stars and planets themselves. They love space so I was kind of taken aback by the fact that it was a new experience. 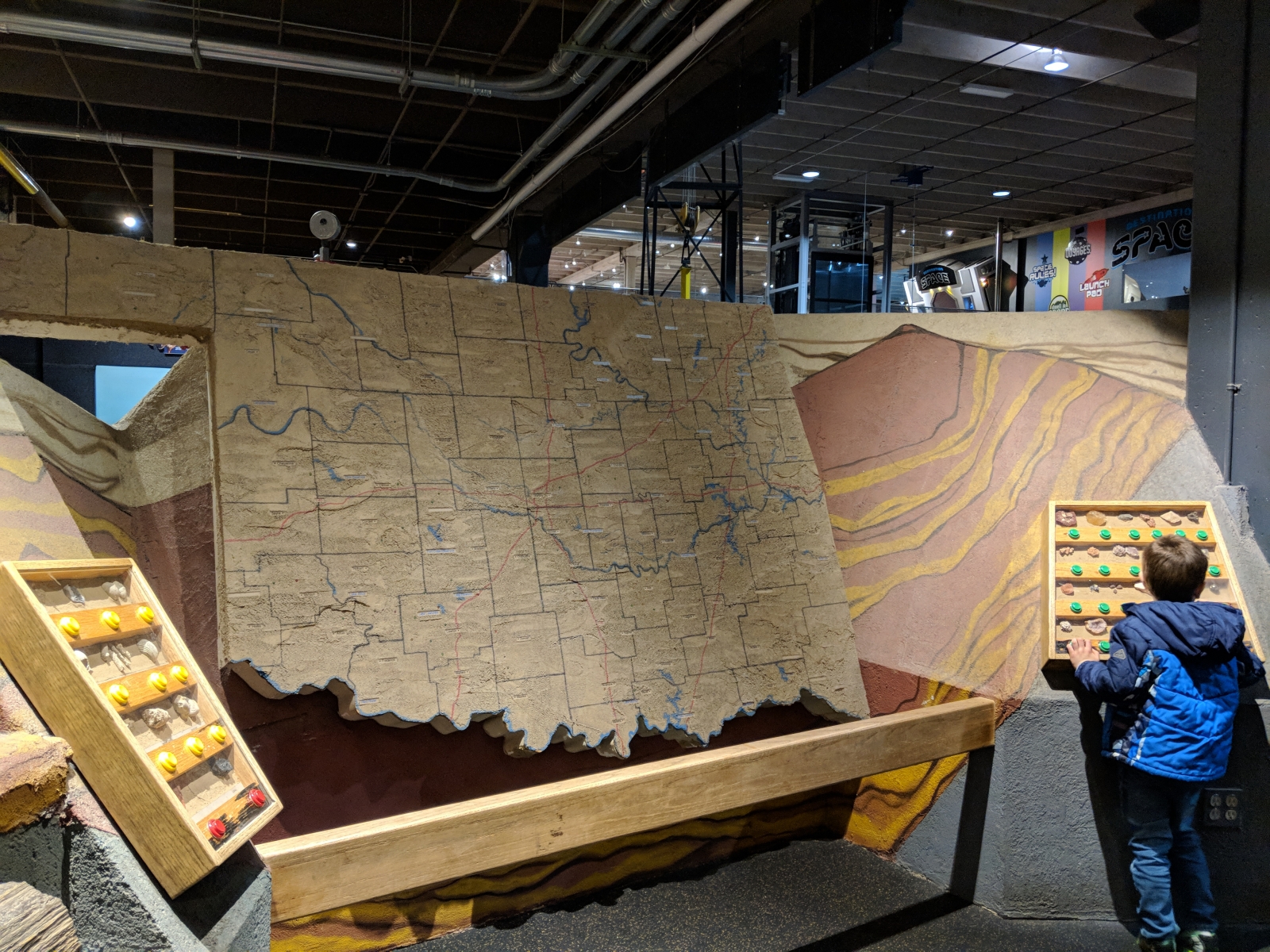 Rocks are another topic of continual interest in this household. I grew up with an engineer and geologists for neighbors so my level of interest in minerals and similar topics is long gone, unfortunately, worn out if it was ever there at all. Sometimes what our parents love just blends into the scenery, so common we don't notice it anymore. My sons, though, are fascinated and this is a good state to foster those interests. Science Museum Oklahoma has a collection on the first floor that my sons were happy to touch and learn about.

The last area that I'd never guessed would call their attention was the Build Your Own Coaster exhibition. We walked by it a few times before they understood that it was a hands-on play center where children can put together ramps, loops and stretches of track to create roller coaster-like structures for rubber balls to bounce down and hopefully reach the end of with the right mix of momentum and designed layout. 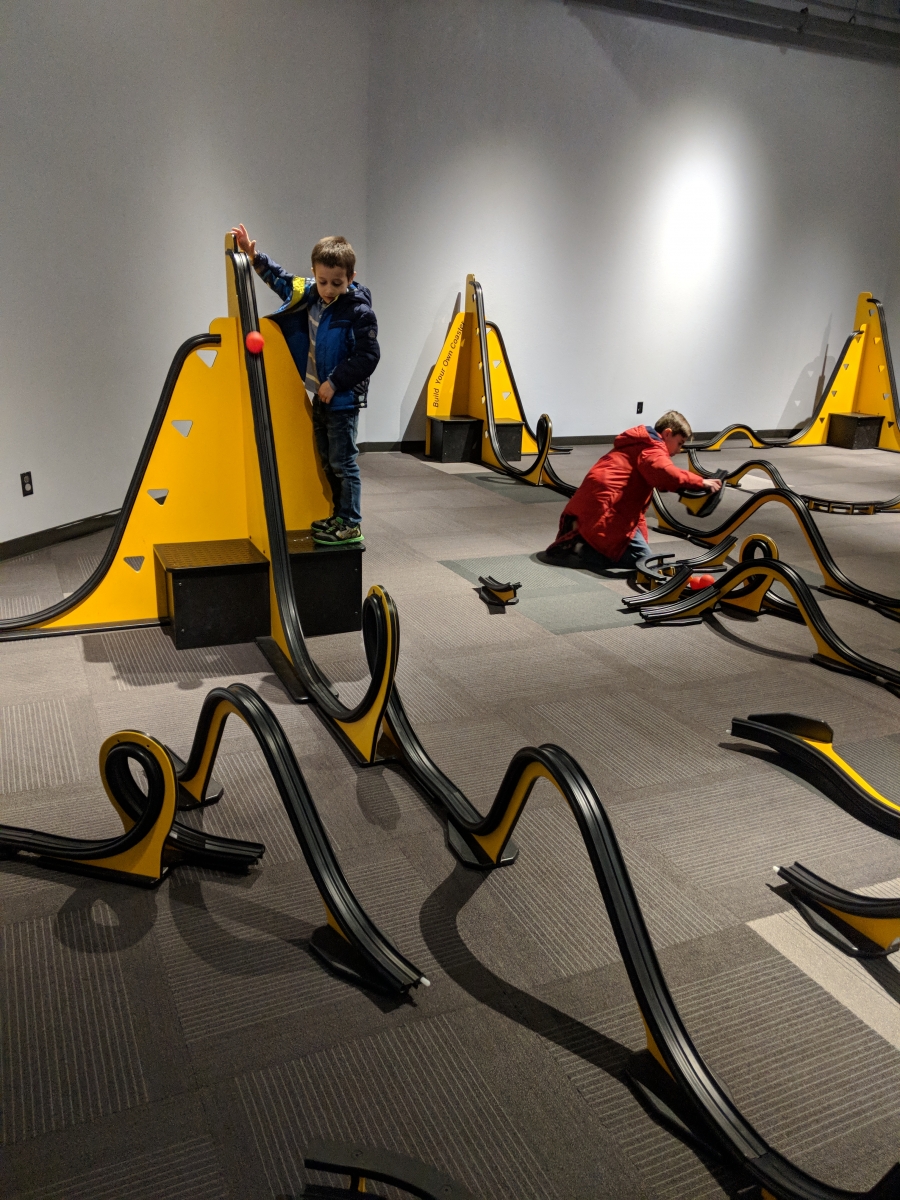 The trial and error process of adding new pieces, changing out what doesn't work and figuring out why was surprisingly engaging. As an adult, I would be easily frustrated and liken it to a sisyphean task but none of my children saw it that way at all. They were happy to keep going until it worked, a trait that I'm glad to see and want to encourage. We have marble shoots and Legos and Hot Wheel tracks at home but the scale and modified application of those concepts came together in a way that kept them playing for the better part of an hour.

If you're looking for a fun weekend afternoon or a place to top your Spring Break agenda, go walk around Science Museum Oklahoma. Your children's level of interest just might surprise you.

Click here for other current museum exhibits. Plan your Spring Break with local happenings here or enroll in a camp near you.

Last bit of advice: let your kids lead you through all the newness and wonder of spring this season. You just might have a better time than you could ever guess.