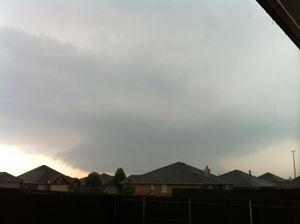 That was my bank. The 7-11 where I buy gas. The hospital where I take my kids to see their pediatrician. The bank where I cashed a check at just after 2pm. The bowling alley where we held my daughter's birthday party.

The park where I take my kids, the one where we took the photos of my daughter for the cover of our 2010 Exploring Oklahoma with Children issue. The park that is 3 miles away, that was hit by a tornado that was possibly 2 miles wide, with a 2.5 mile wide debris ball surrounding it.

I picked up my kids from school. We dodged the rain running to the car, pulled into the garage and over the storm shelter as the hail started.

Shooed the kids in the house to get long pants, a bottle of water, a snack, their backpacks of "necessities" that were still packed from the day before. They came back with their jeans, shoes, blankets, a sleeping bag, pillows, 2 cans of soup, pudding, crackers peanut butter and an orange. 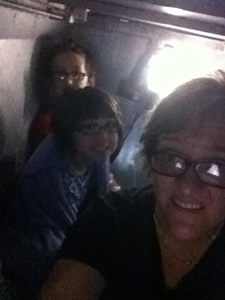 the tornado shelter, but let's not blow too much sunshine; it's a hole.) so I packed a laundry basket with our stuff, snapped a picture out the window and called my husband to tell him we were going underground. This storm spun up so quickly there was no way he could make it home to be with us. Not ideal but we would both be as safe as possible.

We had storms the day before; we endured a little hail, and watched ducks weather the storm in the bushes at our mailbox. It's easy to be lulled into thinking that things won't be that bad when they weren't that bad the day before. It's easy to scoff at the weather reports when they seem to be filled with hyperbole and brimstone. This is Oklahoma after all; we get a lot of weather reports and there are a lot of them that never happen. But sometimes, the storms do happen. And for all the jokes and lighthearted fun we poke at our weather people and storm chasers (Gary England drinking game, anyone? Mike Morgan's sparkle tie?), we do listen. And we respect the power of weather.

I packed the kids in the shelter behind me, crawled in and crouched on my makeshift bench. I set up my laptop on the top step, listening to the crashes and pings against the garage door. Kept up with the chattering on Facebook, so very grateful for friends and family who checked in and kept me mentally occupied to stop me from freaking out. I couldn't get my weather radio to find a signal so I relied on my laptop, prayed the internet would stay connected, searched for the live stream of TV coverage so I could keep up with the storm. My daughter said "I'm scared, mommy" and I said "of course you're scared; this is scary" and that seemed to calm her. We shut the door all the way twice. It's a scary sound when it latches.

We tracked the storm as it neared us, not really understanding how bad it was, how much damage this monster storm was causing in my town. The storm continued, cutting its path and swinging south of the base where my husband was. So I knew that we were safe. I didn't know what else to expect. We stayed underground probably much longer than we needed. That storm had popped up so fast, would another follow? Was it really past? I can still hear thunder and lighting.

How do I know it's really safe?

I helped the kids crawl out, pulled out our necessities (funny how few things we feel we really need in a situation like this), got back in the house. Turned the TV back on to see what was going on, called my husband to let him know that we were out of the hole and safe. Walked around the house to check the destruction and make sure that the roof was undamaged.

Called my mom to let her know we were okay.

Saw the damage. The wide swath cut through town. Rendered me speechless. Saw the schools that were hit, one of which was completely leveled; the other one where a friend worked, where her kids attended. Is she okay? Are all those kids okay? Because when I picked up my kids, all the kids in school were "sheltering in place," meaning doing what we were taught to do as kids… kneeling in the fetal position, facing the wall, hands over heads. 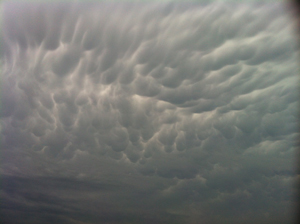 It was too much. I started crying. My kids just turned to stare, not knowing what to make of it. It was just too much. We were safe; I was relieved. But oh, the damage. I thanked them for their hugs, and my son sang in my ear, a Bob Marley song: "… everything's gonna be all right … everything's gonna be all right …" … the same song that I sang while I was in the OR getting prepped for my emergency C-section with him. Meaningful lyrics.

We were glued to the coverage all night. Had to turn it off and watch old sitcom reruns at some point, when it got overwhelming. We've still got no water because the water treatment plant was hit, but I can't even complain about that. Watched the rescue efforts turn into recovery efforts and cried along with the reporter who told us about the story.

I spent hours on Facebook and Twitter, reposting requests to help find loved ones, local businesses and churches that opened up to help shelter those in need. And then seeing all of the people from all around the world tweeting their support for Oklahoma. Sending donations and putting out requests for more. Asking for information on those displaced families that they saw on the newsfeed. Listened to the sound of the sirens of the emergency vehicles responding to help. Those sirens sounded for hours. We wished that we could run down and help but knowing that staying away from the area was the best thing we could do to help right now.

The day before, after the storms, we came out of the house and counted the hailstones, smiled at the ducks that waddled in front of the house, hid in our bushes and played in the street puddles.

But today was different.

If you feel compelled, help. Contact the Red Cross or the Salvation Army and donate. They need money, water, supplies for the first responders and volunteers helping to clean up. If you can't donate, then send your prayers, kind words and thoughts our way.