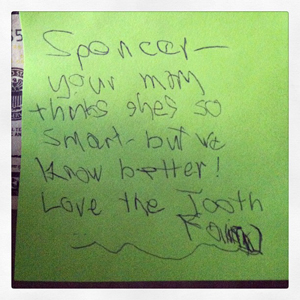 He lost a molar. It was the first tooth he’d lost in a while, pushed out by the appearance of his grown-up tooth. Was it the first of his adult molars? I couldn’t remember; sadly, I’m not that mom (the organized one who keeps detailed records). He can berate me for that later.

It was about half an hour past bedtime, he came blazing out of his room, blood smeared on his cheek and tooth held proudly aloft. We went in the bathroom where he rinsed his mouth, wiped his cheek and we discussed why this baby tooth coming out didn’t hurt (no root) and why it would hurt if one of his adult teeth did come out.
Of course, the topic of the Tooth Fairy came up. What would we do with the tooth? I honestly can’t remember the last time he’d lost a tooth. In the past, we had a special little bag that would hang from his doorknob, which the Tooth Fairy would visit to trade human tooth for legal tender. They developed something of a communication over the years, leaving notes for one another, both scrawled in a somewhat childish hand. But what about now?
My 11-year-old son will be entering 6th grade. He’s becoming something of a young man, and he knows a thing or two. We’ve already had “the talk.”
Yes, THAT talk.
So, really, would it be a surprise to him if I outed the Tooth Fairy?
Well, it turns out? Yes. His eyes got big. “What about Santa!?” he exclaimed.
We’re not talking about that, I replied.
We agreed that we’d leave the tooth on the counter in the bathroom and see what became of it by morning. And when morning came, the bathroom counter was bare, but low and behold, there was a note waiting on his nightstand, complete with legal tender equivalent to make up for the loss of his tooth (which, he reminded me that morning, turned out not to be his first lost molar) and also and a little bit of his innocence. Because, really, it's not my job to take that away. I prefer to be busy with keeping it intact.