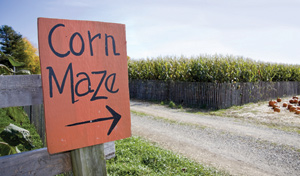 For years my family tried to get me into a corn maze. They finally succeeded on the pretense of a Girl Scout outing. My daughter cared less about the maze than the accumulation of badges, and she’d already picked out a spot on her green vest for the gigantic ear of corn that symbolized overcoming the challenge. So, after having suffered the actual corn maze, I would be rewarded with the monumental task of affixing the badge to the sash. When she started Girl Scouts we had to choose between the sash and the vest, which held more badges. I’m an optimist, so I bought the sash hoping she’d lose interest after the first year. However, it didn’t look like I’d get my wish. The girl would do anything for a badge. She was so competitive I wouldn’t have been surprised if she got the Gold Medal for crocheting a scarf out of yarn she made herself from sheep she raised in the back yard.

On this corn maze thing, she was taking no prisoners.

Every year before this my family asked me to take them to a corn maze, and every year I found an excuse to say no to that particular brand of asinine and terrifying “family fun.” No good can come from getting lost amid stalks. It’s not that I don’t like corn. Creamed corn, corn on the cob, corn fritters, corn bread, candy corn, cornstarch, corn chips. Love them all. I just don’t understand what is supposed to be fun about getting lost on purpose. This phobia not my fault. I blame Children of the Corn. Or any other horror film. What would a slasher flick be without corn syrup? I also believe that corncob violence during October and November is greatly underreported. It’s a scary food group.

One might get lost in corn, never to be seen or heard from again. Last year, one unfortunate family made national headlines for their panicked 9-1-1 call from the belly of a corn beast. As darkness fell, they were unable to find their way out of a corn maze. This is supposed to be a crop, not wholesome autumn entertainment. But that bit of handy news came too late for me this year. Even if it hadn’t, there was the badge at stake.

Off we went, venturing deep into the Ozark mountains, which are really just hills. Broken down shacks, trailers with corrugated green plastic roofing, and rusted everything made up the scenery on the way to the corn maze. This did little for my confidence in the type of people who ran the place. Would they employ state of the art maze GPS tracking? Not likely. Would they kill us and sell our organs? Perhaps. On the drive in I imagined a whole cottage industry of human spleens harvested among the stalks. We passed through several towns where the only productive thing a person can do is to leave. In one such town was a filling station (that is what they are called in these parts) advertising buffalo meat for sale.
“Oh, sure,” I said, “that’s what they call it. Just don’t get lost in the corn.” Sorry, people of the hills, but it’s not a stretch to think that those who would pickle and eat the foot of a pig might not be squeamish about your tender bicep flesh.

No worries. I had a plan. And I had a phone with GPS.

A couple miles from the corn maze, just when I thought I’d found an app that might keep me safe—or at least my next of kin notified of my whereabouts—I lost my signal. The lightning started just as we turned onto the gravel road, and continued to provide dramatic ambiance as we approached the entrance, which happened to be a cemetery. Not a normal cemetery, with smooth cut rocks and tidy rows, but a creepy country ordeal complete with a gnarly old tree and a barbed wire fence. Just in case anyone wanted to break in.

“There sure are a lot of people here,” my husband muttered as we pulled into the parking lot.

“That’s because they’re all lost in the corn maze,” I told him. “It’s like a roach motel for stupid humans.”

My daughter, the sensitive one, said from the back seat. “We’re all gonna die!”

I expected to see a crucifix made of corn husks any minute. Instead, there was a sign advertising hayrides and a petting zoo. I believed it housed the stranded puppies of families who never came out of the corn.

When we found the rest of the troop, I wondered if the leader had Thin Mints and Samosas in her fanny pack. You know, in case we weren’t murdered right off, but had to survive by our wits, hiding from hungry hillbillies and He Who Walks Behind the Rows.

The fates were with us that day. Shortly after we arrived, the corn maze was closed due to the rain. My fear of corn mazes continued, but I wouldn’t have to face it for at least another year. My daughter took a consolation “rainy day” badge that was nearly as large as the corn badge, and just as difficult to sew onto her sash. A few months later she resigned. Any future attempts to convince me to risk my life in rows of corn would not be assisted by the full backing of the Girl Scouts of America. But those crafty corn maze proprietors have come up with a new selling point: going into the maze after dark, with merely a flashlight to guide the way.

Right. I’ll be right over, just as soon as I charge my phone and file this Last Will and Testament.

Editor’s note: We welcome Lela Davidson to MetroFamily Magazine! She’ll be sharing her humor about the trials and tribulations of motherhood here each month.