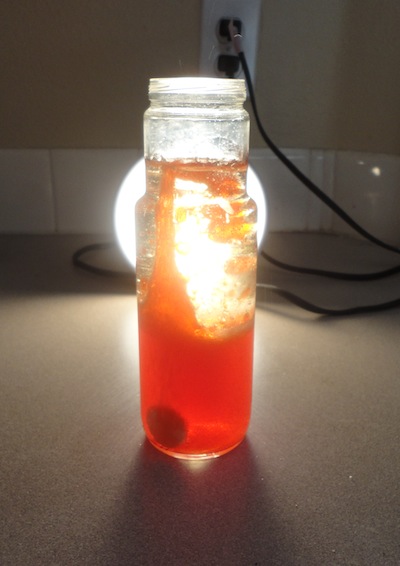 Lava lamps are cool things to stare at for hours. Today I’ll show you how to make a similar type of display (without the cool lights). I’ll also tell you about the science behind this model—and the actual Lava Lamp if you want to know how that one works.

A lava lamp works because it has two liquids that don’t mix together. An actual lava lamp uses water and wax. The lamp inside heats up the wax until it melts then it becomes slightly less dense than water and will float up. When it cools down, it gets denser and then sinks. The process repeats.

This homemade version relies on two liquids not mixing as well: the oil and water. The water has a greater density than the oil and sinks. (Density is a property of matter that shows how much stuff is in a space. Metal has a big density… really heavy for its size!).

When the tablet bubbles in the water, it makes the water less dense, in a sense, and floats up to the top of the oil. When it gets there, the air escapes and the water, denser again, can sink to the bottom.

Good scientists think of questions they can ask and ways to change a system. Can you? How about it you change the size of the container? The size of the tablet? The number of tablets? What if you put more oil in than water? Ask a question and test it out! If you are using this as something to show a teacher at school, write down some observations you make.

I hope you enjoyed this simple experiment and learned a little bit. If you have more questions about this, or need tips about science fair ideas around this topic (or others), contact the author.

Steve Davala is a middle school science teacher who likes to write. He’s got two kids of his own and subjects them to these science activities as guinea pigs.