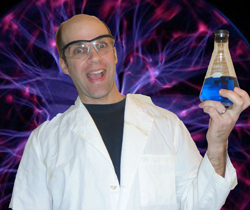 Not enough time to think of a thoughtful science lesson for your kids? Here’s an experiment that is not only entertaining, but will also help your child become a good thinker.

Science is all about making observations and figuring out how things work. Simple, hands-on experiments that begin with, “What do you think will happen?” or end with, “Can you make it happen differently?” get children’s minds in the right place.

The following easy-to-set-up experiment involves mixing equal parts oil and water and then adding a drop of food coloring. The water-based drop remains intact until it sinks through the oil and contacts the water, at which point the color at last disperses. The oil remains separate from the water because it lacks polarity (an article for another day) and floats because it’s less dense.

Understanding density will help your children get the most from the experiment, so here’s a quick explanation. Let’s say you have two objects that are the same size but different weights. The one that weighs more has more matter packed into it. It is denser. A good way to tell if something is more or less dense than water is to put it in water. If it sinks, it’s denser, if it floats, it’s less dense.

This is a simple experiment, but with really great effects and good scientific concepts. Kids will love the explosion of color once the food coloring makes it through the oil. You will love the ease of setup and cleanup.

The experimenting doesn’t have to be over yet, however. In fact, this is when the science really starts to happen. Children will want to continue this one by adding more or different colors to the oil and water (perhaps to the one they already started to see how colors mix, perhaps to a fresh cup). They might choose a different cup size or shape, they may choose different amounts of oil and water, they may even ask some really great questions like, “Food coloring doesn’t mix with oil, but what does it mix with?” Whatever they do, it’s in the name of science, and by encouraging their experimenting, you will be furthering their scientific development.

Steve Davala is a middle school science and math teacher. He enjoys the hands-on approach to learning science, as do his two kids!