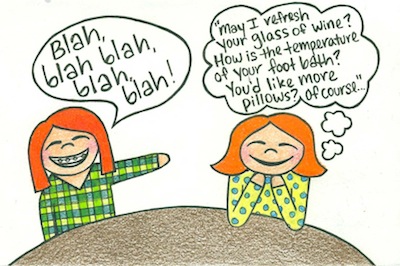 She still has several weeks until we actually take her to her “home away from home in the woods by the river,” but that hasn’t stopped her from packing and repacking while incessantly talking about everything she’ll be doing while away.

“I can’t wait to float the river and swim in the pool and hike up the mountain and paint a ceramic garden troll and braid a bracelet and roast marshmallows and collect rocks. And…” she continued after taking in a deep breath, “I can’t wait to do it all again next year!” I sat in her room listening to her as she continued to give a potential play-by-play of her week at camp, leaving no possible detail left unsaid. I nodded my head when she needed affirmation, gasped when she mentioned the wildlife she may or may not encounter and laughed when she proposed cabin prank after cabin prank—including stolen undergarments, shaving cream and the aforementioned wildlife.
While I was very happy that my baby girl was excited about her first venture at a real sleep-away camp, I have to admit I was also just a tiny bit jealous. I’d had my turn at summer camp when I was her age. I really didn’t want to go to summer camp with her (see the aforementioned shaving cream and wildlife comments). I think, more than anything, I wanted a week away. And that’s when it hit me…I wanted a Momma Camp.

Stick with me, here; I think I’m on to something with this Momma Camp idea.

At Momma Camp, there would be no washing machines and there certainly would be no dryers. When we had dirty clothes, we would wad them up into balls and shove them in the corners of our suitcases. And, if we wanted to wear the same black yoga pants and gray Bon Jovi T-shirt every single day of camp, no one would judge us. In fact, we’d probably be complimented on our great fashion sense every morning when we strolled out of our cabins looking well-rested and refreshed.

You see, we’d each have a bed to ourselves for the whole night. The whole night, my friends! No one would come tip-toeing into our bedrooms at an ungodly hour and wake us by asking for a cup of water, no one would crawl in bed and immediately steal our covers and no one would stand over us at the first sign of light in the morning wanting help unwrapping a cereal bar and finding the television remote.

Speaking of television remotes, we’d always have control. At Momma Camp, we’d watch endless hours of talk shows and countless chick flicks without anyone rolling his or her eyes at us, sighing because he was missing the big game or whining that there’s a new tween concert on right that very minute.

When it was dinnertime, someone else would cook. Everyone would like it, and the words “gross,” “yuck” and “again?!?!” would never be uttered. We could eat food while it was still warm, and—best of all—we wouldn’t have to wash the dishes.

We could soak in the bathtub each evening without any squeaky toys floating in the bubbles with us. We could take a shower each morning and the hot water would never run out. No one would knock on the door when we were bathing and holler through the door, “Daddy told me to come ask you…”

My Momma Camp was a fine fantasy indeed. I sighed big when my camp-dreaming daughter brought me back to reality.  “Do you think I’ll have fun, Momma?” she said with an anticipatory look of satisfaction upon her hopeful little face. I sighed and said, “I know I would.”

She didn’t need to know we fantasized about two very different camps.