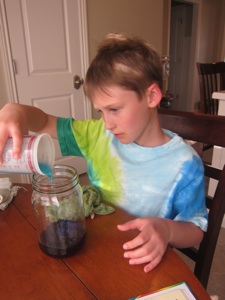 Let me start this post by saying that I am not a scientist and I don’t even play one at home.  That role falls to my husband, who has a microbiology degree and is a doctor, which kind of makes my 10th grade biology award look crummy.  So sometimes I have what he thinks are some pretty funny ideas about scientific concepts, but this is one topic where I think I have a true scientific point of view.  Now on to the rest of the story…

When I was teaching in the classroom, another teacher once told me that she didn’t like doing experiments with her class because she was afraid they wouldn’t turn out right.  I understood what she was saying, but the real issue is that so many of the science “experiments” we do with kids are really more demonstrations instead of actual experiments.  We know the outcome—assuming we follow the steps correctly—and often the kids do, too.  If we were really experimenting, we might have a good hypothesis about what would take place, but we wouldn’t know for sure.

Whether you’re doing a demonstration or an experiment, it’s okay if it doesn’t turn out like you thought it would.  That’s the time that you can go back and look at your steps and see if you can figure out what you did that made your results different, which is a great learning opportunity!  If you are doing a true experiment and you don’t get the results you expected, you’ve found one more idea that didn’t work.  As Thomas Edison supposedly said about his inventions, “I have not failed.  I’ve just found 10,000 ways that won’t work.”

We recently tried to make a liquid rainbow—there is a book that we checked out from the library, and you can see some of the supplies used in this blog post, and we did not end up with something similar to the cover.  I thought we were going to get it, but in the end, we ended up with a few distinct layers and then a large brownish section in the middle.  It was a bummer to have it look so gross, but we after going back through what we had done, we concluded that we had not poured one of the layers slowly enough and it ended up mixing some with another layer.  The layers themselves eventually separated, but I think the food coloring had mixed enough that we didn’t get the nice distinct colors.  The important part, though, is that we had a good time and we learned something!

Don’t be afraid to try an experiment!  As long as you keep at it, you can’t fail!