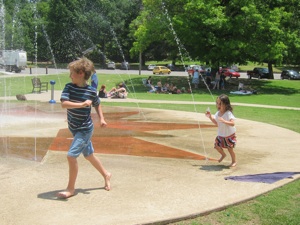 I’ve shared before that sometimes you need to learn to say no more often in order to really be at home to homeschool.  Summertime, though, is Yes Time at our house.  Would you like to jump in that splash pad in your clothes?  Okay!  You guys want to have a sleepover in the tent?  Sure!  There’s a movie at the park and we won’t get home until 11:00?  Why not?  And on and on until we’re ready for school to start back up and a normal routine to resume.

Do I say yes to everything?  No.

I have learned that I have to set my limits because otherwise my kids would keep upping the ante on their requests and pretty soon they would see their mom’s head spin around and explode, which would be traumatic for everyone.  Also, there are certain requests that nine year old boys make that would likely result in trips to the emergency room, so safety is obviously an issue.

I do work at not immediately saying no, though, and sometimes that’s hard.  If they want to do water balloons my mind jumps to finding tiny balloon pieces all over the yard for the nest three weeks.  When they ask to stay up late for something I think about their inability to sleep in and my loss of free time in the evening.  Sometimes, though, those experiences are well worth the cost.  My kids will always remember going to the park with their great-grandma and running through the fountains fully clothed or lying under the stars watching movies at the park while they stuffed their cheeks with candy.

I know a lot of homeschoolers don’t take the summer off so they can spread their breaks throughout the year and when you live in a place as hot as Oklahoma, there’s definitely something to be said for that.  For now, though, we’re relishing in the long months of no schedule and plenty of freedom to say yes!