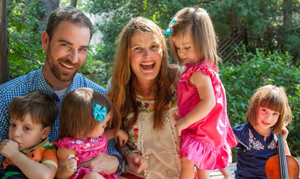 Sarah Grote was just four years old when she picked up a violin for the first time—an instrument that she chose primarily for its size. “My parents asked me if I’d rather play the violin or the piano, and the piano seemed so big,” she recalls. “I told my parents that the violin seemed like it would be easier to carry.” This decision proved fateful for the Tahlequah native, who has spent the last 30 years playing music.

Before she was married with children, Sarah and her sister Laura decided to start their own band. “We had a name [Hurricane Jane] and we had a plan, but no other musicians,” she explains. “We took out an ad in the paper and got some really, really crazy phone calls at all hours of the day and night. We eventually narrowed it down to three musicians and we had no idea those choices would someday be so significant.”

During her time in Hurricane Jane, Sarah began teaching middle school orchestra for Oklahoma City Public Schools (OKCPS). “Some of our biggest fans were teachers and administrators from my school,” she says. “And some of my students’ biggest fans at their orchestra concerts were the other members of Hurricane Jane. It was such a neat feeling to look out during a middle school concert and see [the other members] taking photos or playing along up on stage. The band had such a great attitude and were always up for playing anywhere and everywhere.”

Eventually, Hurricane Jane decided to tour and Sarah made playing music her full-time job. “It was liberating, fascinating and rewarding on so many levels and probably should have been a little scary,” she recalls. “But we never gave it a second thought. We had such an amazing support group that cheered us on.” Sarah admits that her goal was never to make it big as a famous musician or to make a fortune. “I just wanted to make a living with music,” she explains. “At the end of our days as a group, I was able to say we did it. We made music, made a little money, made a lot of friends and made a life together.”

The Rhythm of Motherhood

A few years later, Hurricane Jane parted ways and Sarah married her husband Eric, who she met through a band mate, and her sister Laura married the group’s guitar player. “After the band separated, I went back to teaching in OKCPS at an elementary school,” she continues. “My school received a VH1 grant that allowed any child to play a violin and we had over 200 children enrolled in strings that I was able to teach. We made some super cool music and changed many lives along the way.”

Her students’ lives weren’t the only ones changing at that time. Sarah gave birth to her first daughter, Julia in 2008. “After our first child, Eric begged me not to play gigs,” she recalls. “He worried about being left alone in case the baby cried or got hungry. The dishes would be overflowing and laundry piled high and I would rush home after a gig to help him. We just couldn’t imagine that life could be any harder.” Less than two years later, their son Jake was born—and then 9 months after Jake’s birth, the Grotes found out that they were expecting twins Megan and Gretchen. “That’s when life got exciting,” she says, describing her life now with four children under the age of five. “The dishes still overflow and the piles of laundry are still there—but Eric sends me on my way when it’s gig time and, for that, I love him more than he will ever know!”

During the twins’ first year of life, Sarah recalls how tough it was to get all four children up and out of the house. “Julia was only 3, Jake was 17 months and I was nursing Megan and Gretchen,” she says. “My only break was loading them all up in the minivan, putting on some music, driving through Starbucks and then just driving around until the babies got hungry. We never even got out of the car, but it was so peaceful and calming. During that first year, it was a solid hour of guaranteed ‘me time!’” Now that her kids are older, Sarah explains that they are able to spend more time out and about. “Some adventures are easier than others. Eating out is always a challenge,” she explains. “Sometimes we have meltdowns, sometimes everyone stays calm. But, it doesn’t stop us from getting out and attempting to have some fun.”

Even though her tune may have changed, music continues to play an important role in her life. Sarah feels that playing music keeps her balanced, relaxed and inspired. “It’s my therapy,” she explains. “I spend the day with my precious children. Then once the day comes to an end, I get a little break playing music with some of my best friends and amazing musicians. I get dressed, I get out and about, I have adult conversation, and I play some music. And I get paid for it! It just works for me.” She currently plays with local groups the Stringents and ZuZu's Petals, as well as offering group violin, viola, cello and guitar classes. “The group classes give me a chance to continue doing what I love, without committing too much time throughout the week,” she adds.

“Music has allowed me to travel all over the world and meet some amazing people along the way,” she concludes. “I spent a summer in Salzburg, Austria playing the viola, a summer traveling in Ireland and playing in pubs with my sister and have enjoyed road trips to Santa Fe playing local venues. Not to mention that ten summers of teaching a fiddle camp right here in Oklahoma and meeting eager kids ready to jam. But nothing compared to the five years of traveling the midwest with Hurricane Jane in a van with one of my best friends, my sister and our family members and friends that met us along the way!”

Here’s more about how this 38-year-old mother of four is rocking her way through motherhood.

What’s one thing most people don’t know about you?
We didn’t find out the gender in advance with any of our babies, even the twins—and it was so fun!

What are you passionate about?
Staying positive and happy. For me and for my kids, it makes life so easy.

How has motherhood changed you?
Motherhood has given me four amazing little ones to spend my day with, which has certainly been a life-changer.

How do you banish stress?
I make sure I am the first one to wake up every morning. Things are just smoother when I get a bit of time to myself in the morning. I may get a little exercise, do some grocery shopping or just do a few things around the house.

How do you find balance in your life?
Just by taking it one day at a time. Early morning, my routine is wake up, chai tea, shower, get kiddos going for the day, go out and about for a little fun with the little ones, afternoon naps for the kids, mom gets a little computer time, kiddos up, husband home, kiss husband, make dinner, take a little walk, get kiddos to bed, play a gig or teach a lesson, conversation with husband, go to bed. And we do it all again the next day.

Advice for other moms?
Our favorite family quote, courtesy of my brother-in-law, is “embrace the chaos.”

What is your parenting style?
Ignore the weeds and water the flowers! I try to focus on the things my kids are doing right. And instead of saying “no” all the time, I try to divert their attention to something else. I’m not sure this will be my parenting style for the long haul, but it seems to work during these toddler years.

Favorite quote or advice about motherhood?
I have a tiny little reminder by my kitchen sink: “The days are long, but the years are short.”