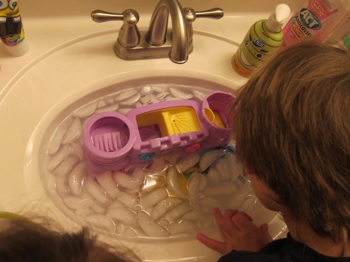 I’m a big believer in planning.  I rarely do it like I should, but I believe in it nonetheless.  Sometimes, though, it’s best to forget the plans and follow your children’s interests.  Last week we went down a couple of rabbit trails in our house!

My three year old has been reading Goodnight Moon.  We’ve been working on rhymes, playing games, and observing the moon each night. One afternoon we read Winter Days in the Big Woods while we were waiting at my son’s PE class and she was off!  As soon as we got home she started rummaging in her play kitchen stuff and made her own butter churn out of a Dora telescope and a bar from her doll’s highchair.  The next day she went back to her play kitchen and started telling me about how she lived far, far away from the store and she had to grow her own food and store it, just like Laura and Mary did.  Later she wrapped up her baby just like the picture she liked of Ma and baby Carrie.  So what did we do for her school time?  We read a lot of Little House books!  No, it wasn’t what I had planned, but those plans can wait for another day.  She was so interested in what we had read that I couldn’t deny her the chance to learn more!

My son also had his own rabbit trail last week, which started with some bathtub toys.  For some reason he had Atlantis on the brain.  I’d like to say it was definitely from the reading he’d done about Plato, but it also very likely could have been from Atlantis SquarePantis.  Anyway, he decided to put a plastic castle of his sister’s in one of the bathroom sinks and pretend like it was Atlantis.  After playing around a while, he yelled, “What would happen if Atlantis froze?!”  Pretty soon I heard him running down the stairs, shortly followed by the rumble of the ice dispenser.  He found a thermometer and his sister became the ice courier as he worked to see how low he could bring the water temperature.  Eventually he got it to 18 degrees!  “Filling the bathroom sink with ice cubes and toys” was not anywhere in the day’s lesson plans, but he learned a lot from his experiment.  We reviewed reading a thermometer and the difference between Celsius and Fahrenheit and talked about how it felt like the water at the Titanic museum we visited over the summer.  He wondered if it would be possible to get the water completely frozen and we talked about how we would be in really bad shape if our house got cold enough for that to happen!

Did we continue on with the lessons we had planned?  Yes, eventually, we did.  My kids got the chance to learn what I wanted them to and to learn something they wanted to learn, too.  Your lesson plans will almost always hold for a day or two, and if you give your kids the chance to follow their interests you won’t regret it! 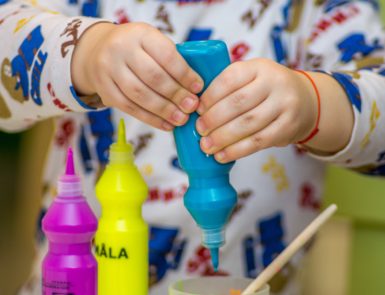 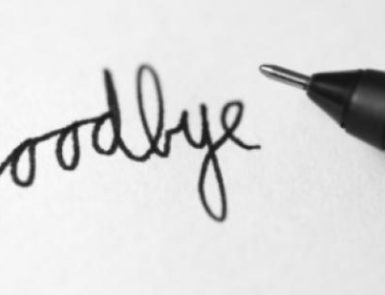 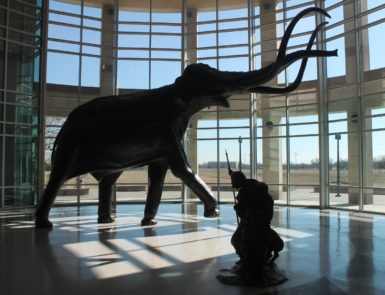