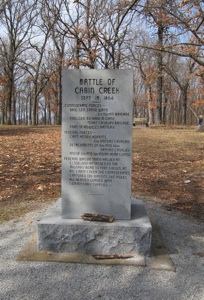 You may have heard recently about the 150th anniversary of the Battle of Gettysburg, which took place July 1-3, 1863 in Gettysburg, Pennsylvania.  When most of us hear about the Civil War we think of the North and the South and battles that took place back east, but battles did take place in what is now Oklahoma.  Here are a few resources on Oklahoma during the Civil War that you might find interesting!

Forts:  There are three different forts in the state that played a part in the Civil War and all three are open to visitors now.  They’re spread around the state, so almost no matter where you live in Oklahoma, there’s one close enough to make a day trip.  Click here for more information from the Civil War Traveler website.

Battle Sites:  Honey Springs, which is located in Checotah, is probably the most well-known Civil War battle site in the state.  This fall they will be having a reenactment in honor of the 150th anniversary of the battle.  Cabin Creek, just east of Adair, is not as well known, but it is located in a beautiful area and would make a great field trip, too.

Rifles for Watie:  Harold Keith is the only Oklahoma author to win the Newbery Award.  Published in 1957, this novel is written for middle and high school students, but adults would enjoy it and learn from it as well.

If you’re up for a short drive to Tulsa, you can hear author Jim Murphy speak at Gilcrease Museum on August 23rd.  Murphy has written more than 30 nonfiction books, including several on the Civil War.

Hopefully these ideas will give you some simple ways to make history more interesting for your kids!