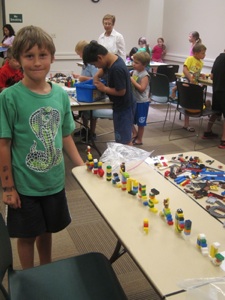 One of the most common criticisms you hear about homeschooling is that the kids are too sheltered, and as just about any busy homeschooling mom can tell, you that’s not true.  If you think my kids are always stuck at home, you should take a look at my car’s mileage each week—it can get pretty crazy.  I think sometimes, though, kids shelter themselves from new experiences that they might find uncomfortable.  That’s probably something all kids do no matter where they go to school, but my guess would be that it’s a little easier for homeschoolers to fall into that simply because we’re not required to follow a set curriculum or check activities off a list.  If it’s not something we’re really wanting to do, we can find a work around fairly easily most of the time.

As my son gets older, though, he continues to surprise me with how he puts himself out there.  Last year he competed in his first track meet.  He’d never participated in any kind of formal sports; his favorite thing about PE is dodge ball.  Nevertheless, when his teacher handed out information sheets, he was all in.  We got up early one Saturday morning and headed out to the field to watch him race against mostly public school kids who, it was apparent, had at least competed in their school meets, and many of them looked like they were really into track.  I was a little nervous at the sight of my child out there with his floppy hair and loose fitting shorts and t-shirt next to these kids who looked like they were running at the junior Olympics.  In the end, he didn’t win, but he did okay, and more importantly, he had fun.

This summer he decided to try a Lego competition at our library.  This didn’t surprise me because he loves Legos and loves to make scenes with them.  (The post I did about his Lego presidents is by far the most pinned thing from my blog.)  He had never competed in anything like this before, though, and honestly, the rules were a little vague.  He brought his bag, he built, and he didn’t win.  He did go around to look at the winning creations, though, and when he realized the boy standing next to him was the one who won, he congratulated him and complimented him on his set.

These experiences have been good for him and I think he’s had enough fun doing them that he’s willing to keep putting himself out there, even if he doesn’t win prizes doing it.  And as his mom, this makes me so proud of him that he’s figuring out that even though it’s great to win, it’s also great to try things, and that he’s doing it so graciously is icing on the cake.  I challenge you to keep an eye out for these kinds of experiences for your kids—it’s good for them and it’s good for you, too!