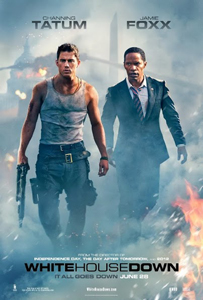 MPAA Rating: PG-13 for prolonged sequences of action and violence, including intense gunfire and explosions, some language and a brief sexual image.

SYNOPSIS: While on a tour of the White House with his young daughter, a Capitol policeman (Channing Tatum) springs into action to save his child and protect the president (Jamie Foxx) from a heavily armed group of paramilitary invaders.

Sex/Nudity: A brief scene with high-tech thermal equipment reveals the outline (through a building) of two people apparently having sex.

Violence/Gore: There's a ton of violence and a high body count of collateral damage, but only a few bloody injuries. People die from bullet wounds, explosions, or blunt force. Weapons include handguns, machine guns, grenades, anti-aircraft missiles, military helicopters, and nuclear missiles. There are also a few hand-to-hand fights and various scenes of executions or close-range murders. Civilians, including an 11-year-old girl and a school group, are held hostage and threatened.

Drugs/Alcohol: The president is a former smoker who chews Nicorette gum. A staffer for the vice president drinks on a plane.

Which Kids Will Like It? Kids 13 and older who like patriotic movies with lots of action and stunts, like Roland Emmerich's "Independence Day," only without the aliens.

Will Parents Like It? "White House Down" is entertaining, and Tatum and Foxx have good chemistry. But the movie features lots of guns and violence, and an 11-year-old girl is put in extreme peril.

REVIEW: I feel like "White House Down" is two different movies. Channing Tatum and Jamie Foxx thought they were making a comedy, and director Roland Emmerich thought he was making a drama. So the movie falls somewhere in the middle, but doesn't quite work on either end of the spectrum.

There's no doubt that Tatum and Foxx have great chemistry. They're funny, they play well off each other, and you can tell they're friends off-screen. But all of that is overshadowed with the preponderance of guns and violence in "White House Down."

I would love to see them in another movie together with a different premise. Maybe a buddy road trip movie or even a buddy cop movie. Nick Nolte and Eddie Murphy made it work in 1982's "48 Hours," but that was rated R. Maybe "White House Down" would have worked better as an R-rated movie, similar to the other "White House under siege" film earlier this year, "Olympus Has Fallen."

"White House Down" follows Capitol police officer John Cale (Channing Tatum), who's at the White House interviewing for a job with the Secret Service. He takes his adorable daughter Emily (Joey King) along because she loves all things political and can ramble off facts and stats about the White House at will. Cale's application is rejected, because the agent who interviews him (Maggie Gyllenhaal) knows he has a history of not following through on things. But he sticks around to take Emily on a tour of the White House.

Meanwhile, President James Sawyer (Jamie Foxx) is on the cusp of negotiating peace in the Middle East. Things take a violent turn when the retiring head of the Secret Service (James Woods) orchestrates a bloody takeover of the White House with help from an extremist crew of paramilitary mercenaries led by disgraced Delta Force operator Emil Stenz (Jason Clarke).

Cale ends up being the sole person inside the White House with the experience to save President Sawyer, but he must also find a way to protect Emily before the terrorists destroy the nation's biggest symbol.

Ok, let's call this movie what it is. A chance to see Channing Tatum flex his muscles and whoop some you-know-what. The timing is probably bad, in that "Olympus Has Fallen" came out earlier this year (though I wouldn't call that a great movie either), but even without that movie, "White House Down" doesn't tread new ground by any means.

Plus, the plot is ridiculous (what, none of the other trained armed guards can get a shot off?), and the idea of one man defeating a crew of mercenaries with machine guns is preposterous. I'd also like to think things are a little more secure at the White House than a security system that lets random people wander into the presidential screening room to "work on the system there." Yeah, they turn out to be bad guys.

James Woods makes a great bad guy, and Joey Clark is such a cutie and maybe has an action-star career ahead of her as she stands up to the thugs in this movie. Though I will say that in light of everything that's happened in our country over the past year, the scenes where there's a gun pointed at her head are not fun at all. Nor are the scenes where buildings fall and remind us of the 9/11 terrorist attack.

But the charm of Tatum and Foxx (sort of) makes up for it, along with bits of humor here and there. Like the President looking for wingtips in his closet and instead putting on Air Jordans. Or when he says "The pen IS mightier," right before he sticks a presidential fountain pen into some poor schmuck mercenary.

The over-the-top stunts and well-choreographed action also help, and there are references to Wiki Leaks and a secret tunnel where JFK had Marilyn Monroe shepherded in.

If you're a fan of Tatum or Foxx, "White House Down" is probably worth checking out on the big screen. If not, wait for it to come out on DVD, blu-ray or On Demand.