Mom Gets the Last Laugh: Trotting Out My Turkey - MetroFamily Magazine 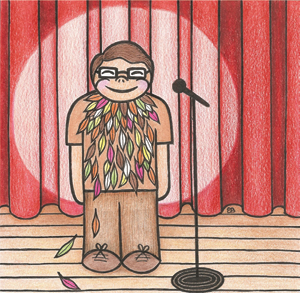 In the third grade, my son’s class put on a Thanksgiving program in which he starred as both a turkey and a rapper, reading an essay he wrote entitled, “Why I’m Thankful for My Education.” I value overachievement, so it was comforting to see my son following my example of excellence. As it turned out, he wasn’t the only one expected to perform.

Two weeks before the show, I received a note from the music teacher, informing me that my child had been chosen to be a turkey (Chosen! Nothing better than having my child singled out for special assignments!). Consequently I needed to cover a white T-shirt completely with feathers. Completely: all caps, bold. Use a hot glue gun, it said. If I was not able to make the costume, I was told in a condescending tone, I should call the music teacher immediately.

Ordinarily, I’m not interested in proving my worth or competing with other women via my child (I prefer to use shoes and handbags). However, I also can’t seem to back away from a challenge. In my fervor for accomplishment, I interpreted this note as a dare.

If I sound—I don’t know… possessed?—I blame my mother. She probably couldn’t tell you what the letters in PTA stand for. Not that she wasn’t supportive, in her way. She came to all my plays and concerts and even honored my wish that she not wear sequins (most of the time). The woman just wasn’t PTA material. I think there’s a gene for it. So in my extended adolescent rebellion to be not-like-my-mother, I skipped off like a Good Mommy to the local big box craft store.

To my surprise, an entire aisle of the store was devoted to feathers. Turns out they are not cheap, especially turkey-appropriate colors like brown, white and black. I attributed the lower price point of the bolder colors to less demand (The cul-de-sac burlesque scene wasn’t exactly “happening.”). I compromised, buying one packet of suitable feathers and a value pack for filler. How badly could a fuchsia and chartreuse turkey stand out from the crowd anyway?

I moved on to the T-shirt aisle and picked up a child’s small in “natural.” I figured the color would mask any ill effects of my feather scrimping. If I happened to run out of feathers mid-wing, my son would have a turkey-ish color showing through. I congratulated myself on this improvement over the suggested white.

That night, I waited impatiently for the glue to melt in the barrel of my trusty, but ancient, glue gun. Then I got to sticking. Sure, I attached the first few feathers to my own shirt and yes, I burned off two fingerprints, but overall, for a virgin turkey costume designer, I rocked it. After thirty minutes, I called it good, even if there were a few spots of natural showing through.

The feedback I got the next day after the Thanksgiving Extravaganza dress rehearsal, suggested otherwise.

“You forgot the sleeves,” a neighbor girl noticed. As if turkey legs have feathers.

“Pink feathers are for princesses,” came the next critique.

“There’s boogers on it,” said a kid who clearly did not understand the physics of dried hot glue.

And those were just the kids. The real assessment of my merit as a mother was yet to come. Those super-PTA moms would surely notice that I in fact, did not rock the turkey costume. But my son, ever the encourager, told me not to worry. He pointed out that one kid had worn a plain T-shirt. Plain! That proved I’d done a better job than at least one mom.

On show day, as I took my seat in the cafeteria, tens of turkeys graced the bleacher stage. One actually looked like a very large turkey. A few evoked Vegas acts. The rest looked like mine—scrappy kids with feathers glued to their shirts. My son was not the most attractive faux fowl, but—objectively—his “Turkey Boogie” blew the others kids out of the barnyard. And, not to brag or exaggerate, but his essay demonstrated his ability to lead the free world one day.

Satisfied, relieved, redeemed—I enjoyed the program, distracted only for a moment by my pity for all those other moms, the competitive ones whose kids had no T-shirt showing through.