Mom Gets the Last Laugh: The Most Wonderful Time of the Year? - MetroFamily Magazine 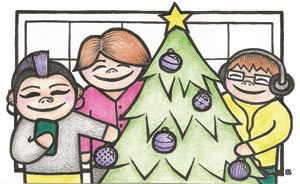 Every year, I attempt to hide my pessimism in favor of delivering a Grinch-less holiday experience for my children. Annually, I determine to create visions of sugarplums dancing inside their sleeping heads.

When they were little, I decided to buy them each an ornament every year. I planned for a far away future when I’d hand them a box with twenty or so Christmas ornaments to remind them of home, family tradition and their happy childhoods. Intermixed with the rest of our ornaments, my children now have motley collections of reindeer, Santas and snowmen—each marked with their names and the date. They are 11 and 13 now. Each year they search out their own trinkets and reminisce before setting them in places of honor upon the tree.

Aside from near toxic levels of dairy intake, this is our only holiday tradition. There are foods I might prepare this year or that; we spend the day at home or away; and Santa was long ago replaced by a kid in a blue Best Buy polo. I’ve even stopped dragging my family to church, but only because I feared the holy water might melt them like the Wicked Witch of the West. Last year I lured them to midnight services with the promise of carrying fire around a church. So naturally, that was the year the congregation elected to forgo the candle element of the candlelight service, which we might have known if church were a regular part of our week. Times like this I wonder if it should be.

Although our family has yet to—and truthfully may never—find our “church home,” we are consumers of Christmas pageantry nonetheless. At least, that’s what I thought. When my daughter was about 6, she asked about a nativity scene; she wanted to know why Jesus was in that “hay thingy.”

My daughter smiled in her cherubic way, innocent and oblivious.

Surely, she knew that the Lord and Savior’s bed was commonly referred to as a manger. The Christmas Eve story is one of the main stories, after all. For crying out loud, she played an angel in the Christmas pageant—you know, that one time, when she was 2. But still, who doesn’t know manger? What kind of apple-pie eating American child living smack dab in the heartland doesn’t know about the baby Jesus in the barn?

That was when I realized there are certain things your children are not going to learn through osmosis or the culture at large. Even putting that cute nativity scene out on the dining room table is not enough. If you want them to know about mangers, you need to take them to church. However, that’s tough for a family of occasional Christians… progressive Christians… Heathens, if you will, living in the Bible belt. We had tried several churches, but nothing really stuck.

The closest we’ve been to church lately was turning around in the parking lot of the gigantic gift shop-equipped house of worship with the million dollar crosses, man-made pond and enormous banners that hang like billboards over its concrete walls to advertise the services offered for the current holiest day.

“See, Mom,” my daughter said as I maneuvered through the beautifully landscaped parking lot. “We do go to church.”

She’s going to be a lawyer.

Last Christmas, we let the kids open most of their gifts on December 21st, before driving 14 hours to a New Mexico ski resort for the season of cream-filled indulgence. On the way home, my daughter realized we hadn’t opened ornaments. Somewhere between travel planning, un-fluffed artificial tree limbs, and the glass ball confetti that was once organized boxes of décor, I had neglected the only constant in our holiday season. But did they really want ornaments? These too-cool children, poised on the edge of being teenagers, all ear buds and eye rolls?
Yes, they assured me. The ornaments were a must. Shopping for them made the top of my post-vacation to-do list.

I spent a while with the clearance rack cast-offs before settling on two glass gingerbread people, matching but not identical. As we were technically into the New Year’s portion of the year, I didn’t bother to wrap them. Instead, I laid them on top of the piles I had made on the dining room table, my half-hearted attempt to sort out the holiday mess of mismatched garlands and broken angels.

My son asked about his ornament. “It’s there,” I said, nodding to the pile.

“I see it!” He picked up one of the gingerbread men. “Is this mine or Gaby’s?”

He giggled when I showed him the other one—just like a little kid at Christmas. Then he took the ornaments upstairs to show his sister.

My children may never get the Bible stories quite right and our traditions may be sparse, but we take our joy where we find it. The most wonderful time of the year really does exist, so long as we remember it only lasts a moment.

As for the manger, we’ll keep trying.

I hear the candles are back at midnight mass.