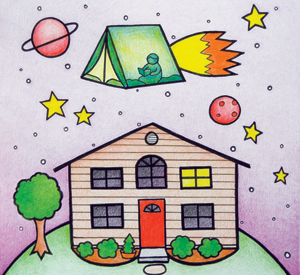 My son went to camp last summer. But, not the kind with archery. Instead, he visited the University of Kansas campus for a three-week fling with aerospace engineering. Because he scores well on standardized tests, Zander is invited to many Very Special Opportunities. The marketing for these academic enrichment programs consists of thinly-veiled sales pitches that good parents prove their love and support by sending gifted children to tours of Greek ruins and space camps—in actual space.

Zander is in eighth grade this year, which in the language of college entrance calendars, loosely translates to you’d-better-hurry-up-and-choose-a-major-or-risk-an-aimless-adulthood. Kids are supposed to start thinking about what they want to do in life in middle school, planning where they might want to study and building their resumes. At that age I was still collecting stickers and trying to figure out if culottes were friend or foe.

Society’s expectations of 13-year-olds have changed. That’s why, when we received the glossy brochure for engineering camp, we didn’t hesitate. Zander’s SAT scores were so high that we could legally send him to college now. (The kid makes a mean ramen. He’d be fine.) Not only was he eligible for the camp, but his math score qualified him for the demanding engineering curriculum. Plus, the camp was run by Duke University. When a leading university sends you a text-merged-facsimile-signed letter, requesting your firstborn to attend their elite summer science institute, you write a check. Maybe you then call some grandparents or sell a sibling to cover that check, but not until it’s in the mail.

I didn’t think we’d have to convince Zander that he wanted to go to camp. What teenage boy wouldn’t want to spend the summer learning about lift, thrust and—well, whatever else goes into flying? But my son wasn’t thrilled about spending his vacation doing math. He also admitted reluctance to being away from home for three weeks. Home is, after all, where the Xbox is. And the family. Zander is social, but not as interested in spending time with friends as family. Though he wasn’t saying so, I knew he’d miss my stir-fried broccoli, the baby names I call him when I tuck him in at night and his father’s daily table manners assessment.

After weeks of pleas to his higher intelligence, it was food that finally closed the deal. I played the all-you-can-eat buffet card. This might have been a slight exaggeration, but that’s how I interpret the word “cafeteria.” All you can eat. He’d thank me later. Once Zander was in, I had to work on my husband, who was devastated to learn from the camp handbook that parents were strongly discouraged from visiting on weekends. John had intended to drive the three and a half hours to—what?—tell our son to take his elbows off the table?

“He’ll be fine,” he said, to himself. Repeatedly.

It took Zander less than five minutes to settle into the dorm room he’d be sharing with a kid from Houston. He joined a game of cards in the hall while we headed to the parent orientation, where the first order of business was homesickness. A young man who could have been a Lord of the Rings extra introduced himself as the counselor. He would work closely with children suffering from anxiety about being away from home. They had staff for that. I tried not to think about the tuition, but I was a bit anxious that Dr. Hobbit would probably earn more this summer than I would.
Next up: the teachers. They lined up against the wall and introduced themselves and their subjects. We waited while the vibrant young grad students and new professors provided their bios and their subjects: creative writing, medical science, English literature. The introductions progressed down the line, each one bringing us one closer to the paunchy guy with the white crew cut.

“I knew that was him,” John told me later. “That is one old school hard-core engineer.” I wondered if Zander would ever forgive us for making him waste three precious Halo skill-building weeks on math camp with grandpa and his pocket protector.
But it was too late to back out now. The check had cleared, and once we had set up the new lamp and filled my son’s nightstand with Ritz Bitz and Oreos, it was time to leave. The walk down the hall was short, the elevator ride painful, and the drive home too quiet. In the weeks that followed, John fared as expected.

“Did he call today?”

I felt sorry for him, and a little guilty. I was enjoying the relative break of managing only one child. Still, it wasn’t all easy. I found myself taking my daughter to places she didn’t belong because I didn’t want to leave her home alone. But a girl’s got to learn about Happy Hour some time. After a week, John sent Zander a care package, and started making plans to make the trip for the second to last day of camp, when Zander’s class would perform a test flight of the gliders they engineered in class.

“Are other parents going to do that?”

My husband didn’t answer. “Did he text?”

“I thought maybe he would tell us about the dance.”

Ah, yes, the dance. In addition to studying the principles that cause airplanes to stay in the air, the Boy and Girl Geniuses participated in many social events, such as movie night, scavenger hunts and dances. Unlike actual college, there were no red Solo cups filled with assorted liquors. (Not that we know of.) We didn’t get many details. Apparently describing awkward moments with the opposite sex is not the highlight of every 13-year-old’s day. All we got were simple answers, delivered on cue. We had asked Zander to call at least once a day. And every night he did, right before he went to bed, and not because he wanted to hear our voices as a stand-in to being tucked in. He had a more practical reason to call us as late as possible, after he’d been checked into his room.

“I didn’t want to waste any of my free time,” he said.

I’m guessing he never visited the Wizard of Homesickness.

When I asked him to call his sister he said, “Tell her to text me.” Seems the experience was maturing him, nurturing a manly preference for minimalist communication.
The evening before the last day of camp John prepped the car and mapped his route. He never fell into his typical deep sleep snore that night, and woke at five the next morning for the three-and-a-half hour drive. On the way home, they shared the cab of the truck with a nine-foot wing span glider, which had earned Zander an A.

Once home, John wanted a demonstration, but the Styrofoam structure didn’t fly as well in the cul-de-sac as it had on the sprawling campus lawns. The deconstruction and reconstruction had altered its delicate balance, rendering it nothing more than a bulky memento. But the opposite was true for us. With my son home, our family was recalibrated. We had sailed past the mark of success and built confidence for the next challenge. Together, our symmetry was restored—at least until the next test.
That night, at my son’s request, we had broccoli for dinner.

Lela Davidson is the author of Blacklisted from the PTA and Who Peed on My Yoga Mat?