Mom Gets the Last Laugh: Of Scissors and Scotch Tape - MetroFamily Magazine 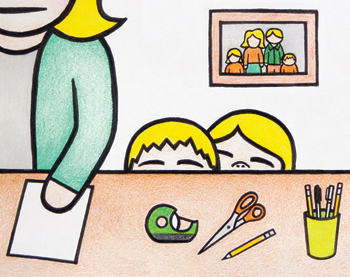 I got up at four in the morning. Crazy, I know, but my husband does it one day every week so sometimes I show my solidarity by getting up with him. It’s a bad idea, a pointless show of support that usually does not end well, but if I’m lucky I get a lot of work done before the kids wake up.

On this particular morning I paid bills, cleared my inbox, and worked out a four-leg carpool schedule for my children’s cotillion class. We can all rest assured the children will be on time to the classes where they learn to say “hello” and “where do you go to school” to a member of the opposite sex without shaking, sweating or otherwise behaving inappropriately.

One of my morning desk jobs required tape. It was urgent, in the way that only Scotch tape emergencies can be. But I’m nothing if not prepared and I took comfort in the knowledge that my trusty tape would be there, waiting patiently in my top left desk drawer.

My heart raced as the swell of anger grew. Such a mildly sticky substance should never cause this much distress. However, instances of lost tape have become a peeve of mine, along with missing scissors and borrowed mechanical pencils. I need little to practice my trade and manage the myriad amusements of our family. All I ask is that my simple tools remain in, or are returned to their proper homes. Is that so much to ask?

My children are infatuated with tape. They make things out of it—pictures, shoes, bicycle parts. They write notes on tape, and then tape them onto walls with more tape. They stick it to their faces. They love it, completely and unconditionally.
Me? I just use tape. And when my little sticky buddy isn’t where I left it, I get a little angry.

I looked in the drawer, in the office supply cubby and behind the bookshelf. No tape. At least three rolls of it—gone, vanished without a trace, like tissue in cold season. Maybe it was the hour, or my not quite fully caffeinated state, but I was livid. I wanted that tape. I wanted it NOW.

But it was five-thirty in the morning. Instead of rousing my children from their beds in a mad woman’s frenzy, I plotted revenge. I would teach those ingrates the consequences of stealing a woman’s tape. It’s not like they hadn’t been warned. A few weeks earlier, I’d stocked up. And not just for me. Generously, I provided each of my two children with a personal roll of tape.

“This is yours,” I said. “You can let me know if you need more, but under no circumstances are you to take the tape from my drawer.” I had showed them the two rolls of tape in my desk drawer so as to underscore the importance of this directive.

After the expected number of eye rolls, they answered in unison. “Yes, Mom, we got it.”

Clearly, they didn’t get it.

Before finishing my pre-dawn cup of coffee I devised a surprisingly rational plan. I would simply take the cost of the replacement office supplies out of their allowances. Each time I reached for something of mine that was not where it should be—cha-ching, show me your money.

When my son and daughter came down for breakfast I said good morning, hugged them, and calmly announced the new policy. One set of eyes narrowed, then teared up. The other just rolled back in its annoyed ‘tween skull.

The toaster was abused.

My daughter was most visibly upset, as she values money more than her brother does, more than shoes, more than breath, I sometimes fear. She shook while pleading her case of injustice.

“You just want to make money off us!”

Ah… yes, exactly. Exploitation of my children popped into my head shortly after peeing on the stick. My wicked plan to get rich extorting my own money for Scotch tape and paperclips was finally starting to pay off! And boy, was I in for a windfall with the scissors.

I resumed typical morning activities—cooking for my children, cleaning up after my children, writing checks so that my children can read books and attend enriching extra-curricular activities. However, I soon noticed that neither of them were speaking to me. Perhaps I’d been a bit harsh, a bit reactive. It occurred to me that picking a fight about tape over breakfast might not have been the wisest choice. And yes, I wondered if it was actually my husband who had taken the tape. But I had to stand my ground. This is the new normal, tape thieves. Deal with it. Because once you go too far down a road you need to stay the course or accept a kind of parental defeat that undermines every future disciplinary effort.

God help us if someone ever swipes the three-hole punch.

Lela Davidson is the author of Blacklisted from the PTA and Who Peed on My Yoga Mat?