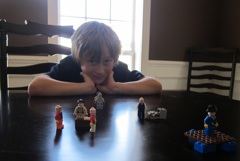 I’ve mentioned before that my eight year old son, Jack, is a Lego fanatic. Almost everything on his birthday list was Lego, and I can’t remember the last non-Lego purchase he made. He pores over books and websites and can tell you all about Lego sets that were retired before he was even born. Whenever he comes across a new book or movie, he immediately asks to get online and see if there is a Lego set for it. If there’s not one, he’ll make one. There’s a lot of Lego love and I’m trying to channel it into his learning whenever I can!

Thankfully, Lego learning ideas are plentiful online! Ami has some wonderful Lego printables and activities for kids of all ages at Walking by the Way. Amy at Milk and Cookies recently did a 10 day series on teaching with Legos and shares ideas for math, science, social studies, and language arts, all using Legos!  Of course, Pinterest is a great source for Lego ideas, too!

Why do I think Legos are so great for learning?  They are very versatile!  You can use them as manipulatives for math or to explore science concepts or just for making scenes.  One of the best lessons we did with Legos was on parallel construction.  Jack was just six at the time and that’s kind of a hard concept for someone that young!  Once we used Legos to map out the conversation from the story, though, it clicked, and later that week he even pointed out parallel construction in another story!

Jack’s favorite thing to do with Legos is to build scenes. As I mentioned before, he loves to create what he calls “custom” sets to go along with whatever he’s interested in at the time.  Because he has collected so many minifigures, he has a huge variety of pieces and can come up with some pretty good likenesses!  A couple of weeks ago, he put his skills to use with our presidents unit. Without any prompting from me, he built scenes with several different Lego presidents using pictures from some of the Getting to Know… books we’ve read.  It’s fun to see how creative he can get—to represent Ulysses S. Grant’s unsavory friends, he used a mummy!

If your child has an interest—or obsession!—with Legos, make it work for you and have fun—just watch out for those tiny pieces underfoot!