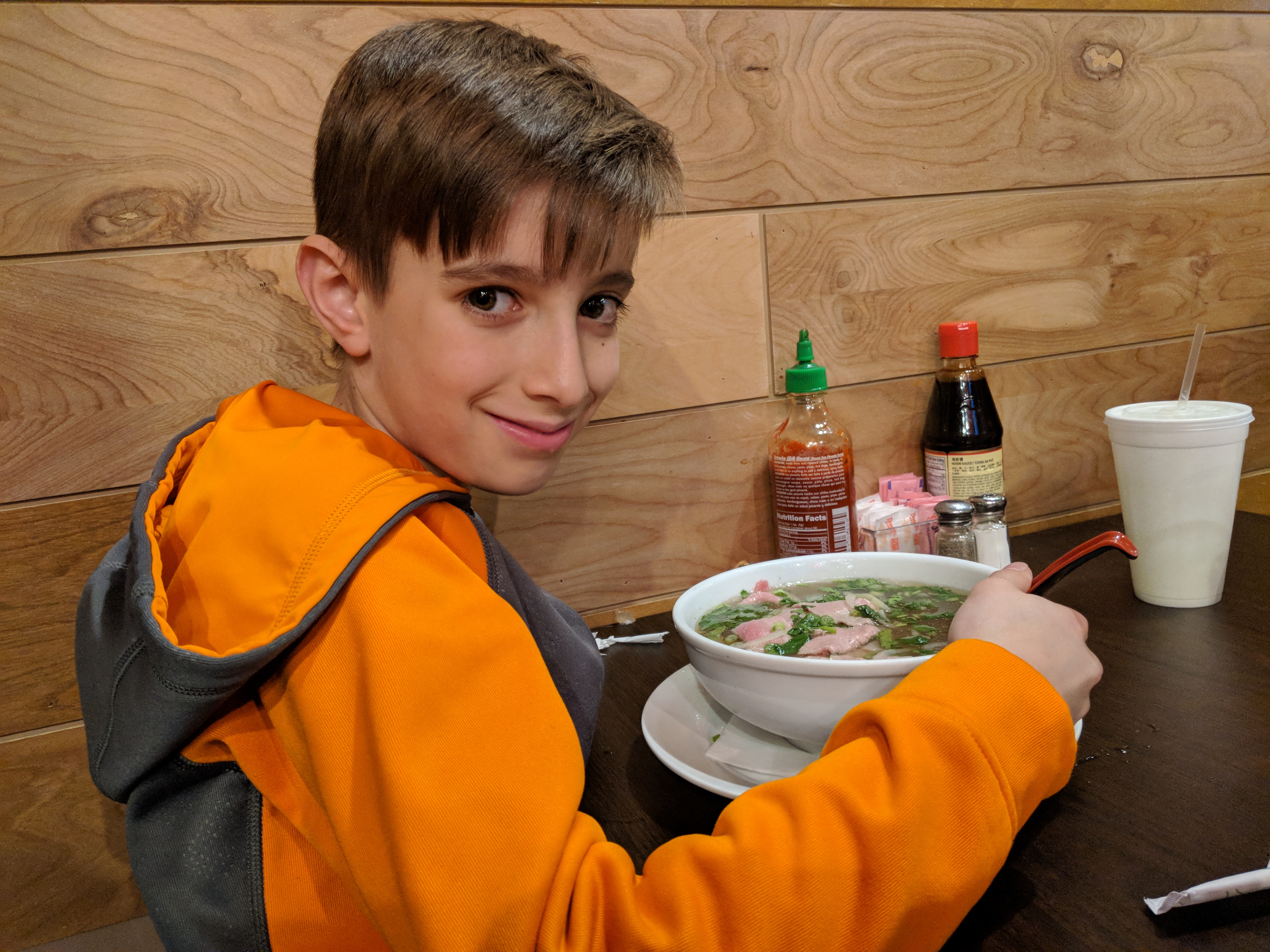 Pho isn’t the same as other Asian foods. It’s a different experience because the soup is a whole meal. I love Japanese noodles but they aren’t the same as Vietnamese noodles. Both are good but they’re not identical. I like the chicken bowl but my favorite has steak.

The flavor is really rich. The bowl is huge! Even the small bowl is too large for me to finish. The best part is that it comes with bean sprouts.

The broth is very hot. You have to be careful not to spill it. Sometimes, my Mom puts ice cubes in it for my brothers so they can eat faster.

Sure! The restaurant has other foods like fried rice and vermicelli but I go for the pho. It’s fun to try the plants it comes with, which are the bean sprouts, sliced limes and fresh basil, and sriracha and hoisin sauce, which is made of oysters. I have to warn other kids about the sriracha because it’s definitely spicy. That red is like saying caution; it’s made from hot peppers. You can use chopsticks but you don’t have to if you feel awkward and want a fork to help with the noodles.

It’s one of my brothers’ favorite places to eat, especially on rainy days but even when it’s hot. No one at our house says no to pho. They are 3 and 6 and they can split one order. They like the big soup spoons.

If you could do this again, knowing what you know now about the restaurant, what would you do differently?

Everything there is spot-on so I can’t really say I would order different food. I would like to try some of the ice cream for dessert, especially the matcha flavor. I don’t like green tea but maybe it’s not so bitter in ice cream.

Does anything you saw match up with what you have seen somewhere else before?

I’ve had other kinds of soup and noodles with vegetables but there’s just something about pho that I love. It’s very fresh and not like the same kid foods. There’s no peanut butter or grilled cheese on the menu, which is a relief. No one feels disappointed when my parents say we’re going there.

What do you think you’ll remember most about Pho Bulous?

I’ll remember that the basil I took home and put in a cup of water grew roots! I can have my own basil plant from getting it to sprout. I’ll think about eating more noodles when I see it and that my family has a happy place there to enjoy a meal together.