In Celebration of the Second Semester - MetroFamily Magazine 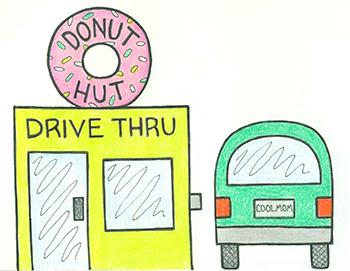 I had stayed up way too late the night before and had to wake up way too early on this particular morning. But isn’t that always the case on the first day back to school from winter break? When my alarm went off (for the ninth time), I poked my head inside my daughters’ bedrooms, mumbled my good-morning greetings, then shuffled myself into the shower, where I willed myself to have enough energy to at least wash my arm pits if nothing else.

It was hard to get going after a great winter break, that’s for sure. “Momma,” my younger daughter approached me in the bathroom as I got out of the shower, which is where we have most of our important conversations, “Since we have to go back to school today, we should go to the donut shop for breakfast.”

As I towel dried my hair, I gave the standard "we’ll see" that Mommas everywhere use to buy themselves some time before having to give a definitive answer.

“Yeah, momma,” my older daughter chimed in on our shower-room convo, “Donuts would be just what we need to get help us start back to school.”

She made a compelling argument—plus, if we drove through the donut shop on our way to school, I wouldn’t have to do breakfast dishes that afternoon when we returned home. I could physically feel myself caving to the call of the deep fried and glazed dough.
I flipped through the new clothes that I’d obtained through Christmas gifts and gift cards, wondering which scarf would be the least likely to show glaze crumbs But, hadn’t I just made a resolution to lose weight this year? And this was the year, unlike the thirty years before, that I really meant it. Donuts and donut shops were not a good choice if I planned on sticking to the New Year’s resolution past the first week of January.

My older daughter broke into my thoughts of a bikini body. “We need a good breakfast in order to start the second semester with a bang.”

“Donuts?” I asked her as I pulled my grey and white scarf.

“The sausage wraps contain protein,” she argued as she pulled one of my red scarves from the same rod, “And besides that, I said ‘good’ not ‘healthy’.”

I nodded wondering when she became such a master of words.

Hastily, I threw together healthy lunches. My kids high-fived each other. They knew that when I took the time to make sure their lunches were completely well-rounded that I was about to cave and drive them through the donut shop.

“Going to the donut shop is a privilege that we’ll be enjoying on days that are few and far between,” I explained as I signaled to turn into the drive-through. “I’m bringing you here to celebrate the second semester of school.”

“And so that we don’t have breakfast dishes to clean up,” my younger daughter added. “And because we move quicker in the mornings when we know we’re driving through the donut shop,” my older daughter interjected.

“Well, yeah,” I said, “But don’t get used to it. Today is special. We’re getting donuts because we’re celebrating going back to school.”

“Then we could celebrate the twelfth day of Christmas.”

“Next we could celebrate days that end in Y.”

Next year, I’ll lose weight. This year, however, just might be known as the year of the donut.