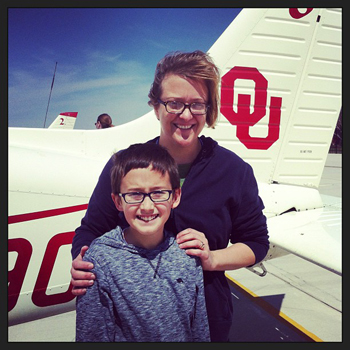 Recently, my son had the opportunity to fly an airplane. An actual airplane, up in the actual sky, an actual several thousand feet above my head. Insert a very long pause right here, as I took a very long pause as I wrote this sentence and the next one—about a week long pause, to be exact—to get my heart rate back to normal.

I was terrified to send my son up into the wild, blue yonder without me, his helicopter mom settled into the seat beside him. You know, keeping him safe. Because that’s what I do, right? Overprotect. But that’s exactly what I couldn’t do this time. I sent him up to fly his own airplane (with a certified flight instructor in a plane with a driver’s education type setup). And he loved every single minute of it.

Through a program at OU called the Oklahoma NASA Space Grant Consortium, one of my son’s teachers took part in the Mission to Planet Earth project in 2012, where teachers are given information and materials to encourage STEM (science, technology, engineering & math) topics in the classroom. As part of that program, those teachers are then invited to bring students to participate in a mini-ground school and flights. And that’s the program that my son was lucky enough to take part in.

So, we made our way to the airfield in Norman early that Saturday morning, with a belly full of nerves. Not his; mine. He was excited at the amazing opportunity, as he should have been. I, on the other hand, was terrified, but I think I did a pretty good job at hiding it. That morning, we met an amazing group of people, learned about aerodynamics, lift, what those little flappy things do on the wings (I did not retain all the technical terms, unfortunately. Probably a good thing I was not the one going to fly.), how to correct for wind speeds and, most fascinating, how to find true north, since the magnetic north pole moves. Who knew? Maybe you did. I did not; math and science have not been my strong suit.

After the classroom learning, the kids were quickly put into groups to ensure even weight distribution in the tiny, lightweight but, I was assured, completely safe airplanes, and before I knew it, my boy was out on the runway with his group, going through the pre-flight check, in the no-man’s land where moms were not permitted. Wow, did I say how quickly that happened? Because it was like super quick. Like Vegas-magician-now-you-see-it-now-you-don’t quick.

Wait! Where was my last hug? My “I love you, mommy!”? My moment where I would have to encourage him, calmly but firmly, to go ahead, get out there, that everything would be okay? He didn’t need it. Off he flew with a caravan of several other tiny little airplanes all piloted by a very well-trained and very young instructor plus two other kids. Their journey would take them southwest to Paul’s Valley, then northeast to Seminole then due west back to Norman. I felt at a total loss. I’m a controlling helicopter mom on the one hand, but on the other, I want my kids to experience life, to learn big lessons and to be independent. I hated how quickly he was off and soaring, but so darn proud of him for having the guts to do it.

And about 90 minutes, later, as promised, back they came. His plane was the first to land and I exhaled the giant breath I had been holding. We parents were allowed onto the tarmac to greet our flyers, and his grin was as wide as mine when he popped out of that tiny airplane’s tiny door—a smile as wide as the Oklahoma horizon. He didn’t say much, but I could see the change in his face, how happy he was that he had been able to take part in this.

Such an amazing opportunity for a child to see that the future is as wide as the sky and his imagination. This is what this program, this free program, offers to our children. And it gave me a chance to step away from my helicopter-mom tendencies and let my boy soar.