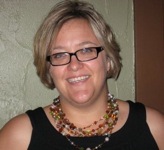 I love fall. I enjoy Halloween, but it's not my favorite holiday. Partially, this is because of how the holiday has evolved. And this is where I start to sound like my grandmother (as in, "when I was your age … [fill in your particular complaint here]).

I remember as a kid, there were a few TV specials, a few hours of trick-or-treating on a Sunday afternoon and lots of candy. Popcorn balls. Costumes that we either purchased from the Five-and-Dime (plastic mask with matching plastic jumpsuit) or something we made up at home (Hobo was always popular. Witch, mummy or vampire were easy to create as well).

But now, that's just not enough. The kids noticed in mid-September when the Halloween stores started popping up. They started talking costumes but quickly lost interest when they realized that it wasn't even time for the State Fair yet, much less trick-or-treating. So when we finally got around to hitting the Halloween store (this past weekend), we were in for a trick, indeed.

Most of our time in the store was spent trying to get my youngest to look at something else, and to look away from the inappropriate costumes, which were mostly for adults (marginally good)… but not all of them. Costumes for girls her age included fishnet stockings, high heels (pictured on the packaging, but thankfully not included in the package), short fluffy skirts, tight bodices and low necklines. Yikes.

For my son, it was mostly blood and guts and costume sans-body parts. Heavy on the gore and shock factor, the costumes for boys were just … gross.

Thankfully, for the most part, the overly sexy costumes seemed to be in one area that was relatively easy to keep the kids away from, but so many others (like the double entendre style costumes) were in full view, sometimes right next to the kid's gear. I agree, the costumes are funny, but not really meant for a G-rated audience. There was a lot of "we're not going to talk about that one because it's inappropriate" coming from me.

Halloween has gone big-time. Costumes have gone Hollywood. While it's fun to watch the effect on adults (I can get behind adults spending an adult-sized amount of cash on a great costume or a great party), I hate to see it trickle down to the kids. Yeah, call me old-fashioned, but I miss when it was just a little bit simpler.