Get Hands-On with the Circus! - MetroFamily Magazine

My family recently went to see Madagascar 3.  If you've seen the movie (or even just the commerical), you are probably familar with the "Circus Afro" scene—just one listen is guaranteed to make your kids laugh and have you walking around for the rest of the day singing "Da da da da da da CIRCUS!"  In case you haven't had the pleaure of hearing it yourself, take a listen and then try to forgive me when you are still singing it three hours from now:

As silly as it may be, the song is a perfect precursor for next week's production of Ringling Bros. Barnum & Bailey's Fully Charged Circus at the Chesapeake Arena.

We attended the Ringling Bros. circus last year and it truly lived up it's well-known monicker of "The Greatest Show on Earth!"  Our kids had attended other circuses before, but last year was the first time they were old enough to truly appreciate the spectacle taking place before their eyes. And this year's show looks to be even more impressive.  Billed as "the most electrifying edition ever" the show's acts include Tabayara, the animal trainer whose "rare ability to communicate with animals" allows him to ride rearing stallions at a gallop and orchestrate four-ton Asian Elephants in a symphony of dance. Another show stopper should be Guillermo performing a three hundred sixty degree flying forward somersault, three stories in air, a feat so difficult it has only been attempted by one other person in the 141-year history of Ringling Bros—and much, much more!

Out favorite part of the event was the All-Access Pre-Show party.  Beginning an hour before show time, your family can meet circus performers, try on real circus costumes, walk around the ring and pretend to be a ringmaster, watch exclusive performances and more. Plus, it's awesome to watch as Asian elephants paint a masterpiece, and then enter for a chance to win your very own pachyderm painting. (We didn't win—but it was fun to watch them paint!) The fun starts an hour before show time, and it’s free with your ticket!

Performances will be held at the Chesapeake Arena at:

All kids seats start at $10 (if you buy them in person at the Cox Convention Center Box Office, the fee is only $2—much less than the online ticket fees) and you can get a coupon for 20% off an adult ticket at Cox Communications Solution Store locations across the metro.

Science Museum Oklahoma is offering a special Science Live show in conjunction with Ringling Bros. Barnum and Bailey Circus performers called the Science of the Circus. This special one-time performance will be held on Wednesday, June 27 from 1:00-1:30pm.

Ambassador of Laughter Clowns will greet SMO guests at the door upon arrival, to help get museum visitors into the circus mood. This special Science Live show will feature performers balancing objects, spining plates, creating optical illusions and even demonstrating the science of juggling. Then,  SMO staff will teach guests about physical and chemical reactions with special audience assistants. For more information, call 405-602-3760, or visit www.sciencemuseumok.org.

The Science Live performance is free with paid museum admission and you can save $2 on general admission tickets with MetroFamily's exclusive Kids Pass coupon.

Whether you attend the circus, go learn about the Science of the Circus, or just sing the Circus Afro song all afternoon, here's hoping you will find a way to be amazed and excited as the circus comes to town!

Wishing I had a rainbow afro wig,
Brooke 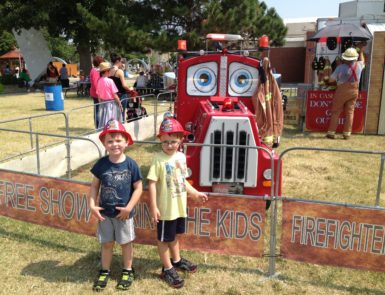