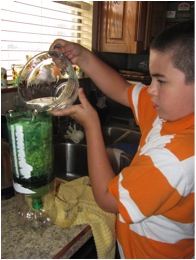 We were told that the K12 curriculum is on average 2 years ahead of many public school systems. We soon discovered this had some truth to it. Our son was speeding through a lot of the work really fast.  Despite the fact that his math, for example, didn’t spend much time “reviewing” what he should have learned already; he was still finishing assignments in half the time that the book suggested it should take him. So we decided to double up on math. We discovered the same thing with spelling, vocabulary, and other subjects as well. Over the first few weeks of school we did a lot of revamping of our schedule! We also discovered that it would not take us the entire school year to finish some of the subjects! Like science.

Then we learned some new things! Some of which I knew, but had not witnessed yet being new to schooling at home. Learning is now a FAMILY event. Sure most of our son’s assignments were done by him with a book, paper and pencil; but when it came time for things like field trips, book reports and science experiments, it quickly became a group lesson with our daughter, me and even the daycare kids getting in on the action! We learned about how the different layers of soil, rock, and so on work as a natural filter for water run-off and rain water and what happens when that water or the ground itself is polluted. Then we learned about how water treatments plants work and made out very own filter! We used items from our home and yard to make our own version of dirty rain water and then used the filter we made to clean the water!

It was awesome to be part of the learning process! I am use to teaching and watching little ones learn to talk, sign, and walk. I have seen the joy on toddlers’ faces when they recognize their own name in writing for the first time and learn to spell it on their own. I  was there when my kids learned their shapes, colors, numbers and letters; but this was my first experience with doing it in a hands on way with our son now that he is school age. Oh sure, I have helped with homework, book reports and even a few science fair projects, but it just wasn’t the same.

Another new concept for my husband and I was “new math”. We have heard stories and seen some cute parodies about it online, but we hadn’t dealt with it first-hand yet. What a rude awakening that was!  Now I am pretty decent at math in general. I was very quick at learning my times tables and did great in the multiplication/division races we did back when I was in grade school, but “new math” was just beyond me. After watching some online videos, talking to some friends, and fighting the urge to just give up and cry; I got in touch with other LCs and my son’s teacher. Sure I could teach him the “old school” way but if the curriculum used one method to round numbers and we used another, we were not going to the same answers. On his book work, that was fine. I can grade that myself. On his online tests, this was not going to work. So we had to have a least a basic understanding of what the curriculum was trying to teach us. After a lot more research (even the teacher’s guide was confusing), we finally seemed to understand it. We finished up all the assignments in the chapter and prepared ourselves for the test. We quickly discovered that the test was a lot easier than the assignments were! I was, of course, relieved, but mentally made note to find myself a crash course on new math!

It never dawned on us that we would run into so many lessons that we would have to either re-learn or learn for the first time. This is 5th  grade! I have an AA degree! My husband is taking college classes and his job in the USAF is definitely way above 5th grade math! I guess now we know how the contestants of “Are you Smarter than a 5th  grader?” feel!

I always knew our son was smart and I knew that we needed to challenge him, but it wasn’t until he started finishing 2+ chapters in spelling every week, that I really understood that I was going to have to really “step it up a notch” in order to keep up with him!