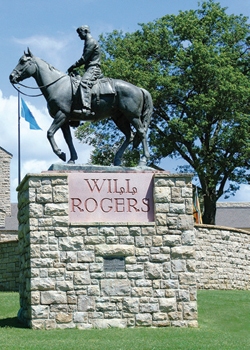 In honor of Oklahoma's 106th birthday, so I wanted to share some of our favorite Oklahoma history field trips with you!

Spiro Mounds:  Did you know that while Charlemagne was being crowned Emperor of the Holy Roman Empire, the Spiro people had developed a sophisticated culture that influenced a large portion of what is now the continental United States?  You can visit the archaeological site and see many of the artifacts discovered there with just a short drive east on 1-40!  Check their website before you go because they sometimes have fun family activities planned!

The Marland Mansion:  If you think history is boring, a trip to the Marland Mansion will change your mind!  E.W. Marland made his fortune in oil and eventually became governor of Oklahoma.  He may be best known, though, for the scandal he caused when he married his adopted daughter, Lydie.  If you visit, be sure to take a tour to get access to more areas of the mansion and to hear all of the interesting stories!

Woolaroc:  Part wildlife preserve, part museum, Woolaroc is a great way to experience Oklahoma's past.  See native wildlife–and some from a little farther away!, do a little hiking, tour the lodge where Frank Phillips entertained friends, or explore the amazing museum.  Woolaroc often hosts special events, so be sure to check the website for the best time to visit!

Oklahoma History Center:  One of the best Oklahoma history field trips is in your own backyard!  Learn about the people, places, and events that made out state into what we are today.  If it's related to Oklahoma history, you're going to see it here!