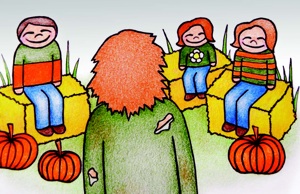 Upon arriving at the farm out in the middle of nowhere, our daughters picked out their pumpkins—they were the roundest, fattest, orangest (it’s a word) pumpkins in the whole patch. We hauled the fall gourds back to the minivan, and then we stood in front of the cornfield ready for the maze.

The crisp air and colorful leaves lulled me into thinking that the corn maze would be a good day-trip for our family. We can’t even walk through the Friday night buffet without loosing a kid or two; I’m not sure why I thought we could actually make it through a ten-acre corn maze.

I had been through a hay bale maze; it was easy peasy. I had walked a labyrinth; it couldn’t be that much different. I had made it through the mega, multi-level mall on Black Friday; I had this corn maze in the bag.

Someone famous once said, “Don’t mess with the corn maze.” But, if no one’s ever said it, let me be the first.“There are seven sign posts throughout the maze,” the admissions officer, um … farmer, um … person told us. “Use your phone to take a picture of all seven and you’ll get a free pumpkin.”

The girls were thrilled at the prospect. I mentally made a note for next year:  Do the corn maze before dropping hundreds of dollars on pumpkins at the patch.

Our older daughter, who is a full-fledged tween, had brought along a friend so she’d “have someone to talk to.” They quickly took off by themselves into the corn maze.

Our younger daughter, who has apparently spent way too much time with me driving aimlessly in the minivan, said she was going with someone who could get her out alive. She and my husband took off into the corn maze.

I stood all by myself at the entrance and decided that I could just do the maze by myself. Besides, if my husband and I each took pictures of the sign posts, we’d each get a pumpkin. So, I took one small step into the corn maze and one giant leap for directionally-challenged people everywhere.

I wasn’t too far into the maze when I spotted the first sign. I whipped my phone from my back pocket and snapped a pic. Proudly, I gave myself a high five. No one else was around. I stood at the double Y—there were four different paths I could take—and contemplated Robert Frost. Sure, the road less travelled is philosophically a great choice. However, the well-trodden path will surely lead to more signs.

“One sign down,” I hollered to my family who was somewhere in the cornfield. I heard nothing in return. I kept walking; surely I’d run into them soon enough.

With a lot of winding and curving through stalks that were much taller than I, I finally found sign number two. I snapped my pic and called out, “Sign number two!” and was met with rustling stalks. I snickered at the thought of my family leaving me there in the corn maze by myself. I ventured on.

I decided to Instagram the picture thinking the world wide web would cheer me on, but discovered I had no service.  So, here I was, a week from Halloween, by myself in the middle of a corn maze, with no one around who could hear me and a cell phone that was useless for anything but taking pictures. That was the moment I decided to leave the cornfield before I became the main character in a Stephen King novel.

I called out to my family. I got silence in return. I power walked down endless trails—I wanted to save my strength in case I got chased. I got nowhere.

I twisted a stalk of corn so I could tell if I’d been down that path already. I passed the twisted stalk four times.

I raised my phone in the air just like the lovely Lady Liberty in New York Harbor and jumped until I was out of breath trying to get a signal. I twisted my ankle on a landing.

Eventually, as the sun was beginning to set (although when my husband tells the story, it had only been thirty-five minutes and was barely 3:00pm), I emerged with only three pictures from the corn confusion and found my family and the extra tween sitting on hay bales, each of them holding a pumpkin.

They begged to go again this year, and I agreed. But only if they tethered me to one of them.