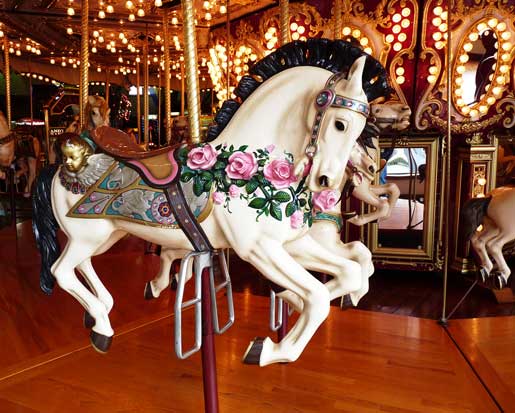 Where can you find lions, tigers, bears, giraffes, panthers, camels, rabbits, pigs, horses, hyenas and an occasional sea monster all in the same place? Not alive, of course, but many of these animals exist in harmony under a carousel’s ornately-carved circus tent.

Carousels have long been a cornerstone of Oklahoma parks and there are still places to ride them today. They offer the opportunity for kids of all ages to climb aboard magical animals for an old-fashioned spin.

While the terms are often used interchangeably, an authentic carousel features horses only; a merry-go-round includes all sorts of animals, and has bench seats as well. “Carousel” is the name most often used in North America, while in Europe the term “merry-go-round” is more common.

Before you visit a carousel with your family, take some time to learn the history of these unique attractions.

The earliest known carousel is depicted in a Byzantine bas-relief sculpture showing figures projecting from the background, dated at around 500 AD. This depiction features riders in baskets suspended from a central pole. The word “carousel” itself originates from the Italian garosello and Spanish carosella (translated as “little war”), used by Christian crusaders to describe a cavalry combat exercise engaged in by horsemen. Crusaders brought the idea of combat preparation back with them from the Holy Land to their native countries.  Eventually carousel-related activities were installed to entertain royal patrons in private gardens.

Accompanying the development of European craft guilds in the early 19th century, carousels were built and operated at social gatherings in central Europe and England. For example, by 1745, wagon maker Michael Dentzel had succeeded in converting his wagon-making business in what is today southern Germany into a carousel-making enterprise. Animal figures were crafted during the winter months and the family then went touring in a wagon train throughout the region, operating their menagerie carousel at various venues.

In this country, the first carousels were put together by farmers who wanted to create interesting playthings for their children.  These farmers attached carved horses to a simple carousel that was powered by a mule. In the 1870s, the spinning playthings became more like the carousels we know today, accompanied by music and turned by steam engines that lifted the animals as they spun around.

By the turn of the century, towns began placing picnic groves at the end of trolley lines to attract riders and eventually turned those groves into amusement parks. Such facilities sometimes featured a carousel.

During the Great Depression, many amusement parks closed.  Carousels were dismantled and the carved horses discarded, except for the ones that were retired to the homes of park employees and others who came under their spell. Some 50 years ago, as carousels began approaching endangered species status, people began collecting them in earnest.

Between 1885 and 1930, American craftsmen created more than 3,000 hand-carved wooden carousels. Today only about 200 still operate in the United States.

Woodworkers spent most of their time carving the horses that rode the outside of the carousel rather than the inside. That’s because these horses are larger (there’s more room on the outside of a carousel) and because these were the ones that people watching from the fairgrounds would most often notice.  The horse that is on the outside directly behind the chariot is referred to as the ‘lead’ horse. These are usually the fanciest on the ride. Benches for people who do not want to hold the ‘reins’ of a horse are called ‘chariots.’

Craftsmen carved their horses in three styles: Country Fair Style animals were produced for rural fairs and traveling carnivals and were made to be durable. The horse’s ears, for example, were carved flat against the horse’s head to protect them from bangs and bumps received during transport.  The Allan Herschell Co. in North Tonawanda, New York was once the largest manufacturer of carousels in the world.  The Herschell firm produced some unique menagerie figures, including a carousel frog. The company also carved sea monsters.

Coney Island Horses are known for their flowing manes and rose bouquet features. The name derives from the place where these horses once frolicked: the Coney Island, New York amusement park. These are large, passionate-appearing animals that have their ears pinned back, nostrils flaring, eyes wide and tongues hanging out.

Carved horses done in the Philadelphia Style are the most realistic appearing of all carousel creatures. These are horses so lifelike, some look like they could enter an actual race and compete against live horses.

See if you can determine which style is represented when you take your next carousel ride!

Where to See and Ride Carousels in Oklahoma:

Joe Zentner is a freelance writer, photographer, and long-time carousel enthusiast. He has published articles in both regional and national magazines. 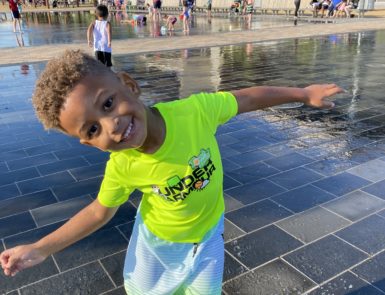