April is Month of the Military Child, by Kami - MetroFamily Magazine 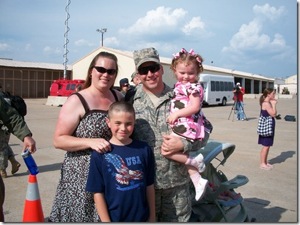 I was a military child. Now I am military wife and Mom to two military children. Children who have spent more than their fair share away from their father and extended family. It is a not an easy life to live. It comes with a lot of heart break and frustration, but it also comes with many blessings.

Our son is 10 years old. He lived in a foreign country from the age of 18 month till about 5.5 years old. Away from grandparents and everyone he knew. His father was TDY (shorted trips) a lot before he was born, but deployed the first time when he was just 5 mths old. In fact, his father missed seeing him roll over and crawl for the first time by mere days! He missed a good majority of his firsts in fact. First tooth, first word, first time he sat up, first time he pulled up, first time he walked along on and climbed up the furniture, first independent steps, and first table foods. He quite literally left a helpless infant who could barely toll side to side and came home to a almost 10 mth old that could climb, talk a little, sit up, feed itself, and was a person with his own wants and desires plus the ability to express himself! All together we figured out that he missed about 3 + years of his life!

Our daughter is 4 yrs old. She was conceived in a foreign country, but thankfully was able to be born here in the USA! Her father was gone more than ½ of her first year, but thankfully didn’t miss as many of her firsts as he did her big brother’s. We moved the first time when she was also about 18 months old. Since then her father has been gone for 10 mths out of the last 30, grand total we estimate he has missed about 16 mths of her little over 48 mths of life. In fact since moving back to the US in May 2007, he has yet to  been home for one full year straight. If we make it to Memorial Day 2012 without another TDY or deployment, then it would be the first time in 5 yrs that he was home for 51 weeks out of 52 weeks straight.

According to the DOD LIVE website, “There are approximately 1.9 million military kids aging from newborn to 18 yrs old. 1.3 million of them are school aged. 765,000 of our military children have Active duty parents, and approximately 225,000 have a parent who is currently deployed. More than 700,000 children have experienced the deployment of one or more parents since 2001.”  I wonder how many of those have experiences multiple deployments?

That is a very large number of children’s parents who are gone for extended periods of time. Many of them, their father’s missed their births due to deployment! I know there are many jobs out there that take parents away from their children for long periods of time, the military just seems to do it way more often and under much scarier circumstances than most. These children are the unsung heros of the military. In my opinion they are the true “silent ranks” since so many of them can’t speak for themselves. Wives today have a lot more opportunities than even our own mothers did during war times, let alone our grandmothers and great grandmothers! So we are not really silent any more these days.

Technology has made it easier for most families to stay in touch. Even “snail” mail usually only takes weeks to get to a deployed unit overseas compared to the MONTHS it took when I was a kid. Technology isn’t the cure, but sure does make it just a tiny bit easier! The last deployment we dealt with was a lot easier on us thanks to Skype and Facebook. It allowed us to actually see and talk to Daddy, not just hear him on a phone or read an email. Hearing his voice is always great but seeing him was heaven! Our son is old enough to sort of understand why Daddy has to go so much, but our daughter was just so young and nothing I could say could dry her tears when she was really missing her Daddy.

We are pretty close family. My husband and I are both very involved in their lives. Now that we home school, we are even closer. I can imagine that our first year of homeschooling might have been  A LOT different if Daddy had been deployed again this year. The lack of support from our son’s “brick and mortar” school was one of the many reasons we choose to home school in the first place. His school lacked the support (and the resources for that matter) to help him the emotional challenges of a deployment. Even when I spoke to them, I didn’t get the feeling they cared to learn about the resources available to them to help kids dealing with deployments.

These children need our love and support. They did not choose to be part of the military, but most of them deal with amazing grace and acceptance that only children seem to know how to. So if you have a military child or know one, give them a hug. Send them a card, letter, or even an email that says “I am thinking about you and I am so proud of you!” The littlest things can really make their day and help them stay strong to their parent(s) get home!

God bless our military and their families! I pray they can all come home safely as soon as possible.