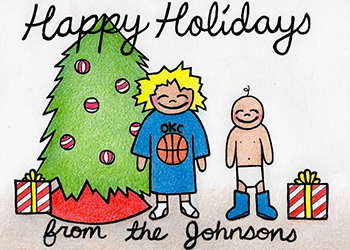 I have the best picture of my younger daughter’s first Christmas morning. She’s wearing her blue-footed pajamas with snowflakes on them. She’s got her pacifier hanging halfway out of her mouth and she’s lying in the middle of the living room floor—if you choose to believe the living room floor is underneath all of the gift wrap and gift bags and tissue paper and toys and books and stockings and candy. And there she is, in the midst of the chaos just lying there, staring straight at the ceiling. Clearly, she’s overwhelmed by the delights and sounds and sites of Christmas morning at our house.

But she looks cute.

She looks cute not just because she she’s taking her break where she can get it.

She looks cute because she’s rocking those sweet pajamas that I had given her the night before and helped put on her after her Christmas Eve bath. Her sister had matching pajamas, and if she’d not been trying to climb up the chimney to look for more loot, I might have had a picture of her as well on that same Christmas morning.

Oddly enough, that picture of that sweet little eleven-month old lying on the floor in her holiday PJs might be the last known picture I have of her wearing her Christmas pajamas.

Even before becoming a momma, I longed for the day that I would purchase matching—or at least coordinating—pajamas for my children. I had visions of sweet babies in their footed pajamas posed beside the lighted tree early in the morning, sleep still in their eyes, smiling serenely for the camera. Norman Rockwell couldn’t paint a more beautiful picture than I had developed in my mind’s eye.

What I didn’t envision was the wide array of Christmas morning pictures I’d get without Christmas pajamas.

I had no idea that the afore-mentioned first Christmas with my little wiped-out celebrator lying in the middle of our living room was as good as it was going to get.

The next year, when my younger daughter was almost two years old, she climbed from her crib (yes she was almost two—the kid is part monkey!) and arrived in the living room on Christmas morning wearing a princess nightgown, complete with attached bows and ribbons that had grown so raggedy over the previous few months due to constant wearing that they looked like fur. When I tucked her in the night before, she was wearing red-footed pajamas with jingle bells on her toes and ruffles on her bottom.

At some point in the night, she had obviously changed. No, I don’t know when or where or why.

The next year, I tucked in a child who was wearing a green plaid, two piece pajama outfit with lace around the collar. She and her matching sister would look darling sitting beside our fireplace holding their Christmas-Bears-Of-The-Year.  Christmas morning, I snapped pictures of that same child wearing only her daddy’s T-shirt and instead of holding her Christmas-Bear-Of-The-Year, she was throwing a tennis ball all over the house.

Since that time, I’ve given her white pajamas that made her little body look like she was a snowman, purple pajamas with Santa-hat wearing frogs up and down the legs, a red night gown with Christmas tree and snowflakes along the hem, and a pair of footed pajamas with button down rear as they wore in days of yore.

Each Christmas Eve, I’d tuck in my precious child, kiss her goodnight, say prayers with her and then tell her that Santa would only come to children who stayed in their beds and stayed in their pajamas … their Christmas pajamas that had been selected with care by their loving mommas who just wanted one—ONE—perfect Christmas morning photo.

I think she saw through me because I’ve yet to get a picture of her in her PJs. Since that first Christmas, I’ve taken Christmas morning pictures of this same child wearing a basketball uniform, a bathing suit, her Halloween costume, an apron and nothing at all but snow boots.

Instead, my child has given me the gift of flexibility and understanding and tolerance. She’s taught me to go with the flow and smile through it all.

She’s also given me countless crazy pictures that will come in handy at a future graduation slide show and quite possibly a wedding reception slide show. And that’s a tradition that I’m firmly on board with.

May your holiday pictures be filled with smiles.

Heather Davis is an Oklahoma momma, a blogger and a believer in Kodak moments. She’s the author of TMI Mom Oversharing My Life and Getting Lucky. She blogs at www.Minivan-Momma.com.