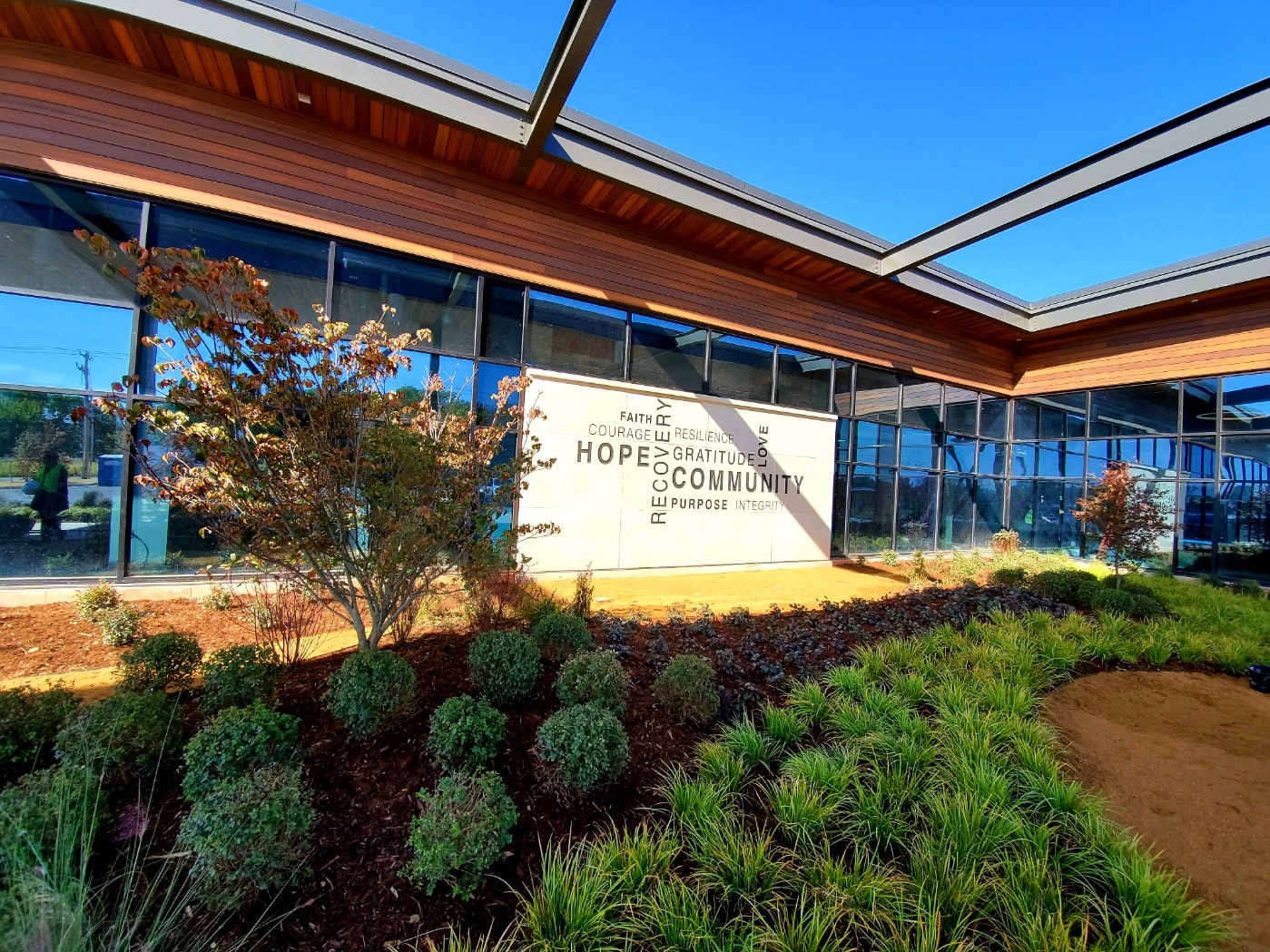 Cierra Eastep’s 7-year-old son scanned the crowd of parents at the class assembly and excitedly pointed her out when he saw her: “That’s my mom!” he told his friends. He was proud, but nowhere near as proud as Eastep was to hear his words. Eastep’s son tells her often how proud he is of her, and those words mean a lot to the mother of four, who a year ago was facing incarceration. Eastep is celebrating the completion of her first semester of college with the help of ReMerge, an Oklahoma City female diversion program that focuses on pregnant women and mothers with felony charges in Oklahoma County who are facing incarceration.

The four-phase program takes an average of 18 to 24 months to complete. Upon graduating the program, participants’ charges can be dismissed.

“All of our moms are high-risk, high-need, either pregnant or mothers of minor children who are eligible for reunification,” said Hillary Burkholder, director of community engagement for ReMerge. “That’s what we really focus on because we want to break those intergenerational cycles.”

ReMerge has graduated 126 participants from the program since it began in 2011.

“They have 317 children among them that we are hopefully breaking that cycle for,” said Burkholder.

The privately-funded nonprofit is looking to make an even greater impact with its new 19,000-square-foot building located at 823 N. Villa. ReMerge can currently serve 50 mothers at a time, and the new building will enable the program to increase that by 50 percent. Both staff and clients provided input on the building’s design to create an intentional, trauma-informed space. It includes a fitness center, kitchen, privacy nooks, visitation area and a restoration garden.

“The whole building was really designed for them to feel valued and to know they are worth the investment we are making in them,” said Burkholder.

When clients begin the program, they are onsite Monday through Friday from 9 a.m. to 3 p.m. They attend meetings, appointments, classes and groups. Each mom is assigned a team with a therapist, care coordinator and recovery support specialist. As they phase up in the program, they spend less time onsite and more time working or going to school, but at a minimum the moms spend 1,100 hours at ReMerge.

In partnership with the public defender and district attorney’s office, ReMerge receives referrals about women who may be eligible after initial assessments when a woman enters jail. ReMerge’s clinical director meets with the potential client to understand her needs and assess readiness for change. If it’s a good fit, the mother is released to ReMerge.

“When you first come in it’s a little overwhelming and asking for help is hard,” said Eastep. “After ReMerge accommodated me and my children so much, I began to trust them and trust the process.”

Eastep said ReMerge staff advocates for mothers and provides many incentives and opportunities she didn’t have before coming to the program.

“You get that support and transportation and employment and education and housing, all of it,” Eastep said.

ReMerge works with community partners to cover the cost of housing for mothers during their first two phases of the program. ReMerge also covers clients’ medical and dental costs. The program has a full-time education and employment coordinator, probation and parole officer, legal aid attorney and health and wellness coordinator, who cooks lunch with the mothers every day.

“[We] want to make sure they are really valuing their own health and wellness and taking care of themselves, and we are also teaching them how to model and do that with their children,” said Burkholder.

Preparing for the future

OSU-OKC, where Eastep recently completed her first semester toward a degree in addiction counseling, offers a free strategies for success class to the mothers. The University of Central Oklahoma offers a mass communications class for ReMerge participants, focusing on soft skills like email etiquette, social media and maintaining sobriety in the workplace. Burkholder said the average age when a ReMerge mother left home is 15.5, and 20 percent of participants need their GED, for which ReMerge offers tutoring.

Thanks to a grant from United Way, ReMerge is launching Courage Cookies, a 12-week program with curriculum focused on entrepreneurship, marketing and inventory management. Participants will also bake cookies twice a week with a mentor. That mentor will become a potential job reference, which is often a barrier for people involved in the justice system.

Burkholder said the idea for Courage Cookies developed after program participants said they wanted to be able to work but being at the program the majority of the day, five days a week, made that difficult.

“In an effort to not make that work history gap any longer than it needs to be or if they have never had a job history that they can list, we want to get them on that road sooner,” Burkholder said. “We are partnering with retail businesses to sell [the cookies], and we are paying them $15 an hour because it is our goal that they make a living wage when they graduate.”

As a former child welfare worker, Burkholder recognizes the importance of providing support to individuals seeking change. Seventy-one percent of ReMerge moms have been victims of domestic violence, and many experienced childhood trauma that has impacted their decisions.

“We are asking them to change everything they’ve ever known,” said Burkholder. “They are learning what healthy relationships even look like, building those support systems up and those connections with each other.  Those are the things that are going to keep them stable and in long-term recovery.”

Eastep is glad ReMerge recognizes the impact of trauma.

“It all stems from some kind of trauma, and if we had gotten help with that trauma then we might not have been in that situation,” Eastep said. “But now that we are getting help hopefully we won’t go back to that situation.”

Keeping moms and kids together

Oklahoma has the highest rate of female incarceration in the nation, topping the list for decades. Burkholder said 85 percent of the women serving time in prison are mothers, which speaks to the need for programs like ReMerge in our state.

“Most had custody of their children before going into prison and most are single parent households,” said Burkholder. “So it’s just traumatic for the entire family but also economically devastating.”

A child with an incarcerated parent is seven times as likely to be incarcerated and has a 2 percent chance of going to college, according to Burkholder, another catalyst for ReMerge to help break that cycle. Incarcerating mothers can strain other family members, such as grandparents who thought they were done raising kids, a situation Bethany resident Crystal Guthrie can relate to and one ReMerge hopes to alleviate when possible.

Her friend told her to pull over and scream for 10 seconds.

“My grandson thought it was fun,” said Guthrie. “I just got the 10 seconds out and I hit the road and did what I had to do.”

Transitioning to being a full-time caretaker of a young child was an adjustment, from securing daycare to changing her own schedule.

“It just changed everything,” said Guthrie. “You’re [in your] late 40s doing your thing, making decisions on the fly and then you’re a full-time mom again. And you don’t once complain because I love him and would not once ask anyone else to take him because he’s where he’s supposed to be. But it is hard to juggle.”

Guthrie and her grandson visit her daughter every other Saturday.

“We’ve tried really hard to keep that bond there and I do think he’s attached to her, I just think it’s not the attachment that she wishes he had,” Guthrie said. “I hope that she understands that it’s not that he doesn’t love her the way that he used to because he does.”

Alexus Walker knows all too well the importance of keeping the bond with children while incarcerated. The 26-year-old was incarcerated from May 2017 to December 2018 and said the impact of being away from her now 5-year-old daughter is still evident.

“She has separation anxiety,” Walker said. “I have to reassure her that I’m here and that I’m not going anywhere.”

During her incarceration at Dr. Eddie Warrior Correctional Center, Walker participated in the Helping Women Recover program. The program helped her address triggers and realize she’s worthy and more than her past mistakes.

“I’m free and peaceful,” Walker said. “I just thank God for the program.”

The face of female incarceration

Putting real faces to these mothers is important, says Burkholder, who stresses there are misconceptions of what a woman involved in the justice system is like. In reality, it can be anyone.

“It can truly be your neighbor, your sister, your mother, your friend,” said Burkholder.

When Guthrie first visited her daughter she was in shock that her child was surrounded by felons and criminals, but as she really observed, she saw mothers, mothers pushing their kids on swing sets, hugging them, carefully changing diapers.

“It’s a yard full of moms with their kids,” said Guthrie. “They are just normal women who have gotten into trouble. They’ve made mistakes. But that doesn’t mean they aren’t good people and good moms. They love their kids.”

In the same way, graduates of ReMerge look like any other mom, celebrating accomplishments that mean a better future for her and her children.

Editor’s note: ReRe Lunsford is a Norman mom of two boys and an adjunct journalism professor at The University of Oklahoma.